Tennessee Gov. Bill Lee joined Middle Tennessee State University’s president and trustees Wednesday, April 3, to underscore several of the institution’s ready-to-work degree programs that have been tailored to fit the needs of the state’s workforce.

Students in one of those programs, Mechatronics Engineering, are getting state-of-the-art training through an in-kind grant from Siemens Digital Industries Software, one of the corporate partners of MTSU’s College of Basic and Applied Sciences.

The software gives students access to the same technology that companies around the world depend on every day to develop innovative products in a wide variety of industries. 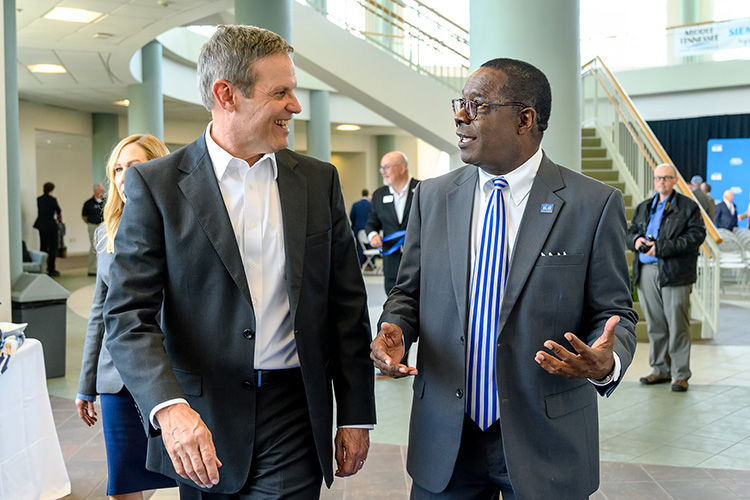 Board of Trustees Chairman Stephen Smith, President Sidney A. McPhee and Siemens’ Nashville General Manager Sara Mould showed the governor how students are being trained on software used to develop robotic systems for automotive, aerospace, machinery and high-tech electronics companies.

“MTSU continues to offer high-quality education and prepare students for the jobs of tomorrow with their mechatronics program,” Lee said.

“The partnership with Siemens is a key part of pairing industry needs with education opportunity. And I’m pleased that this partnership is happening right here at MTSU.”

Mechatronics is a multidisciplinary field that includes a combination of systems, mechanical, electrical, telecommunications, control and computer engineering. The program is based on a three-level international certification program created by Siemens, an innovation leader in automation and digitalization. 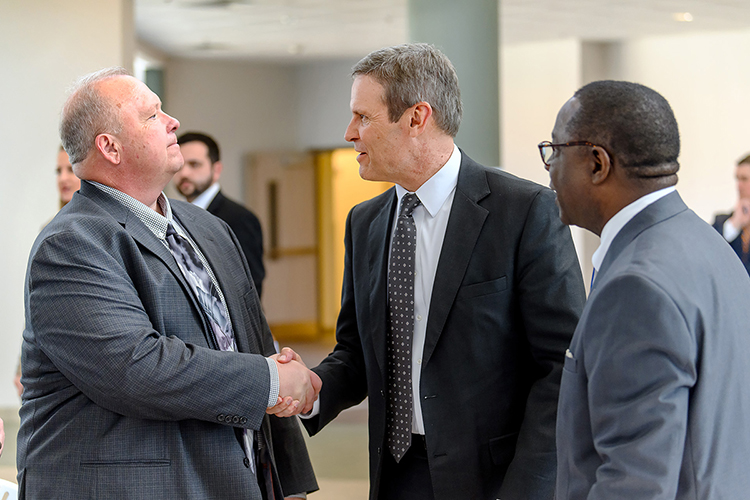 MTSU College of Basic and Applied Sciences Dean Bud Fischer, left, shakes hands with Tennessee Gov. Bill Lee as they meet for the first time while MTSU President Sidney A. McPhee watches. The exchange occurred Wednesday (April 3) at the Miller Education Center as MTSU recognized the Siemens company for its generous grant of computer-aided design software for the mechatronics engineering program. (MTSU photo by J. Intintoli)

“Mechatronics engineering has grown from zero to 400 students in only 5½ years — one of the state’s fastest-growing degree programs literally from imagination to accreditation,” McPhee said. “This degree program was shaped through the partnership with Siemens that we celebrate today.”

MTSU offers the only Level 3 certification program offered by Siemens in the U.S. Graduates earn $65,000 to $75,000 average salary yearly and have found senior positions at Boeing, Insequence Corp., CalsonicKansei and other companies. About 60 students will graduate in May with the degree.

Siemens Corporation, a U.S. subsidiary of Siemens AG, is one of the world’s largest producers of energy-efficient, resource-saving technologies. For more than 160 years, Siemens USA has innovated and invented technologies to support American industry spanning manufacturing, energy, healthcare and infrastructure.

“Siemens is committed to providing students with the opportunity to learn the tools used by many leading manufacturers and technology companies,” said Mould.  “Through our academic partnership with Middle Tennessee State University, we can empower the next generation of digital talent with the skills today’s employers need.”

Smith thanked Siemens for helping MTSU develop the Mechatronics degree and underscored the competitive advantage that students can receive from the recent software grant.

“What this means is that students in our engineering technology and mechatronics programs are training on the most advanced software for computer-aided design, modeling and systems simulation,” he said.

“This grant allows our students to practice on software used by over 140,000 customers globally,” he said.

McPhee said MTSU launched mechatronics in partnership also with Bridgestone and Nissan in response to their workforce needs.

The president also noted several of MTSU’s other ready-to-work programs developed with industry partners, including:

“One in five college graduates in greater Nashville holds an MTSU degree, making us the No. 1 provider to the region’s workforce,” McPhee said.

“Our strong technical and experiential learning, combined with our broad-based liberal arts offerings, prepares students not only for their first job, but for jobs that have not yet been created.” 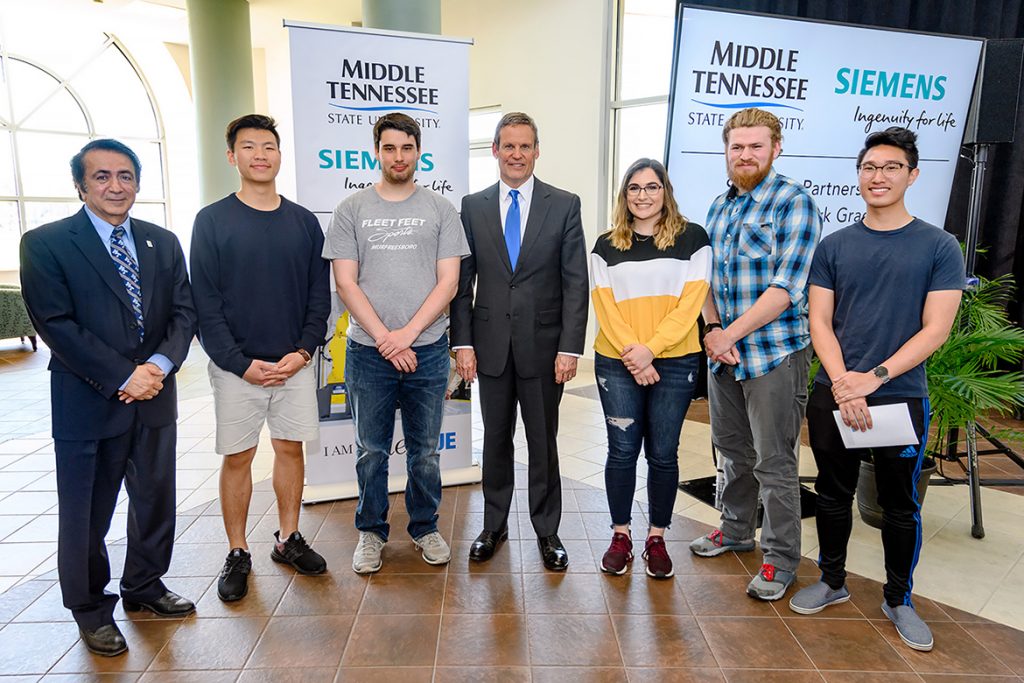 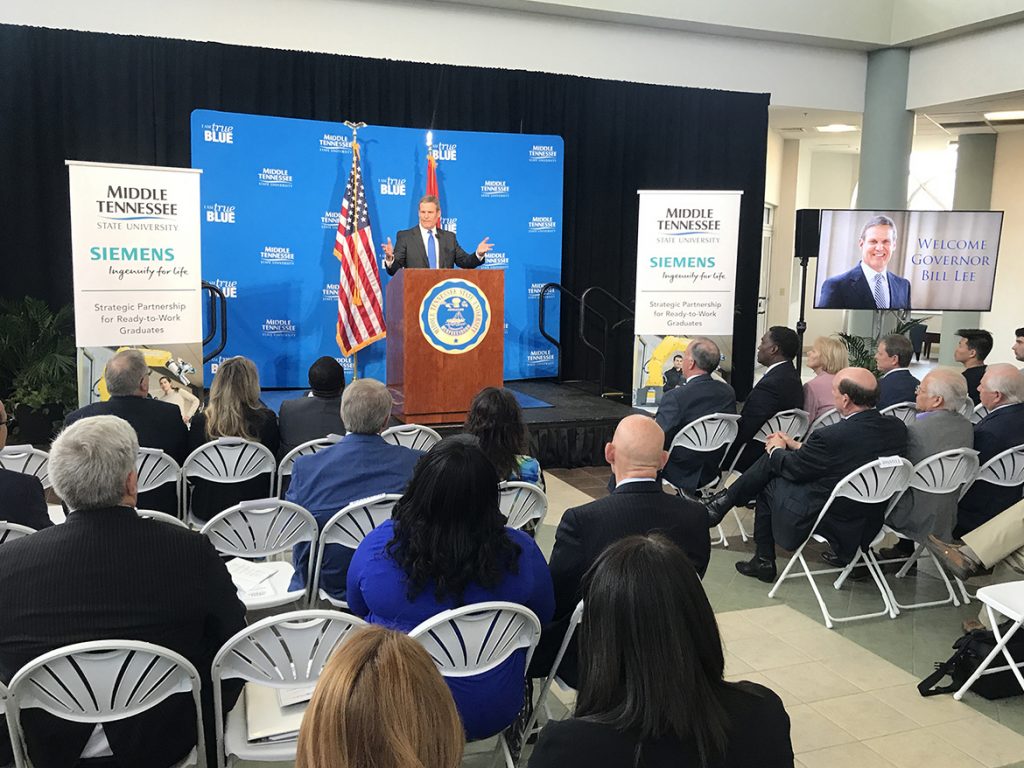