MTSU graduating veterans embark on next chapter of...

MTSU graduating veterans embark on next chapter of their lives [+VIDEO] 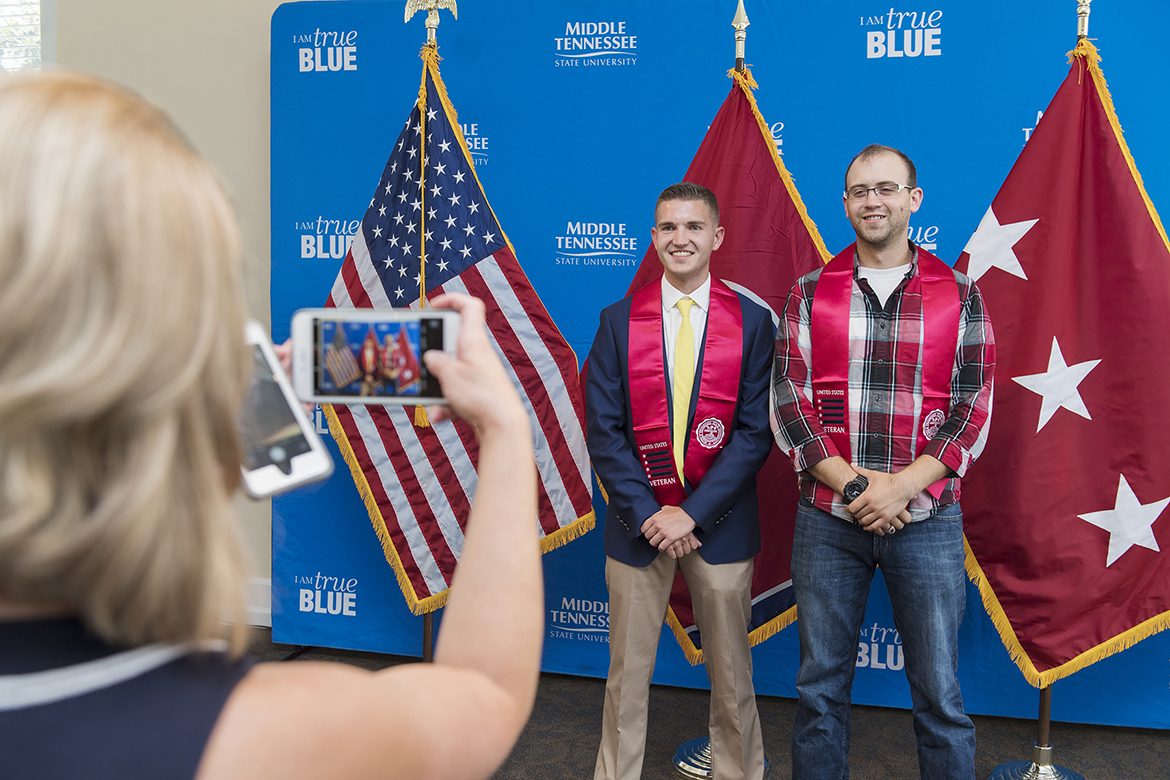 By then, Elion will have earned his third degree from MTSU with his future as a military lawyer ahead of him.

Elion, a Memphis, Tennessee, native, will be among nearly 40 MTSU student veterans scheduled to graduate from Murphy Center. Elion and 12 of his peers received their red stoles to wear at commencement during the Graduating Veterans Stole Ceremony Wednesday, Aug. 2, in the Tom Jackson Building’s Cantrell Hall.

Since May 2015, MTSU has honored its graduating student veterans with a formal ceremony, presenting them with special red stoles.

“It is an accomplishment to know that one year after separating from the Navy, you have completed a master’s degree in liberal arts, and I’m preparing to set out for law school,” Elion, 36, said.

Elion earned bachelor’s degrees in recording industry in 2003 and political science in 2004. He joined the Navy and ended that phase of his life as a religious program specialist.

“I figured out education is very important,” Elion said. “After I earn my law degree, I’m done with school. My degrees have allowed me the freedom to study the way I wanted to.”

He plans to take advantage of G.I. benefits and become a military lawyer.

Elion said he appreciates the Charlie and Hazel Daniels Veterans and Military Family Center office staff “taking time to pull veterans aside. They are very thorough and very important in the transition with VA benefits.”

Keith M. Huber, senior adviser for veterans and leadership initiatives and retired U.S. Army lieutenant general, told the student veterans the “ceremony is about transition … and an opportunity.” He thanked the audience for their “appreciation and support of our men and women in uniform.”

Among those attending were David Corlew with The Journey Home Project and Suzanne Jene, deputy health system director for the Tennessee Valley Healthcare System.

In a partnership Dollar General has with Coca-Cola, DG representatives brought “Honor Our Military and Share a Coke” limited edition 16-ounce cans of the soft drink for people to enjoy.

Huber informed the group tnhat legendary musician Charlie Daniels will be signing copies of his book Thursday, Nov. 2, on campus. The time and venue are to be determined. Through The Journey Home Project, Daniels and his wife, Hazel, have given $125,000 to the veterans center now named in their honor.

Wednesday’s Stole Ceremony is the last scheduled for Cantrell Hall. Veterans Center officials announced they plan to move future ceremonies to the Miller Education Center on Bell Street. The fall service will be held Wednesday, Nov. 29.