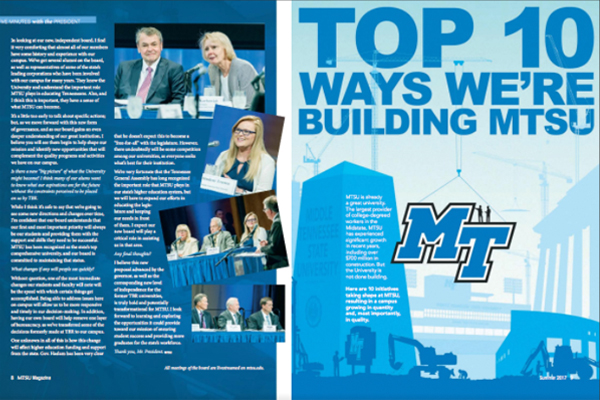 The summer 2017 edition of MTSU Magazine includes a list of 10 initiatives taking shape at MTSU, resulting in a campus growing in quantity and, most importantly, in quality.

“MTSU is already a great university,” wrote MTSU Magazine editor Drew Ruble. “The largest provider of college-degreed workers in the Midstate, MTSU has experienced significant growth in recent years, including over $700 million in construction. But the university is not done building.”

A few examples of items on the list include:

Print copies of MTSU Magazine reach the more than 110,000 graduates of MTSU. An electronic pdf version of MTSU Magazine also is available online here or by clicking the image below. For more information, contact Ruble at drew.ruble@mtsu.edu.

Click the image to view a PDF version of the magazine.