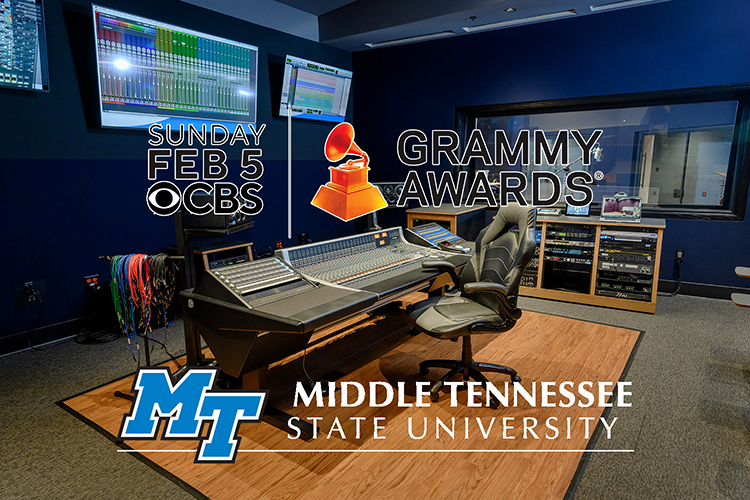 Songwriters, engineers and singers who refined their talents at Middle Tennessee State University have once again been singled out for recognition with this week’s announcement of the nominees for the 65th annual Grammy Awards.

• Grammy-winning recording industry grad Brandon Bell, whose mixing work on Brandi Carlile’s “In These Silent Days” earned him multiple nominations, including album of the year and best Americana album, plus record of the year for “You and Me On The Rock.”

• Multi-Grammy-winning former student Hillary Scott, who’s won her awards as part of the band Lady A and for her solo contemporary Christian music performance work and is back in that category with the sibling duo for KING & COUNTRY.

MTSU once again plans to take a contingent of College of Media and Entertainment students, faculty and administrators to LA for a long weekend of gathering with local alumni and attending backstage and pre-show Grammy events.

Williford, a 2016 MTSU graduate from Gastonia, North Carolina, was nominated for song of the year for co-writing Combs’ platinum-selling “Doin’ This.”

Serving for the last several years as Combs’ guitarist and bandleader, Williford earned his first No. 1 single, “One Number Away,” in August 2018 and the 2019 CMA Song of the Year award for the quadruple-platinum-selling “Beautiful Crazy.”

He’s also co-writer of Combs’ double-platinum cuts “Forever After All” and “The Other Guy” and is currently working on his own studio project.

The official video for “Doin’ This” is available below.

From ‘A Star is Born’ to ‘Lindeville Gazette’

2009 alumnus Raitiere won his first Grammy at the 2020 ceremonies for co-writing “I’ll Never Love Again” for “A Star is Born” in the best song for visual media category.

The Danville, Kentucky, native co-wrote all but one of the songs and sings on two on McBryde’s “Ashley McBryde Presents: Lindeville,” a concept album about a fictional small town and its inhabitants. McBryde, Raitiere and a friend created “Lindeville,” and their musical pals, including Brandy Clark and Caylee Hammack, join them to make up the “cast.”

Raitiere also has a song each on this year’s country album nominees by Miranda Lambert and Maren Morris and co-wrote two cuts on McBryde’s Grammy-nominated 2020 second album, “Never Will.” He also recently released his newest album, “Single Wide Dreamer.”

The lyric video for “The Missed Connection Section of the Lindeville Gazette,” which Raitiere and Clark perform, is available below.

Bell, who’s engineered projects for artists ranging from Amythyst Kiah to The Lonely Island to the Zac Brown Band, plus Raitiere’s new album, won the bluegrass album Grammy for mixing “Nobody Knows You,” the Steep Canyon Rangers’ 2012 release.

He also has been twice-nominated for the Grammy for best nonclassical engineered album: “Like Red On A Rose,” Alan Jackson’s 2006 CD, and Sarah Jarosz’s 2011 release “Follow Me Down.”

The official lyric video for Carlile’s “You and Me On the Rock” video is available below.

This nomination is for engineering Nelson’s 72nd studio album, the country release “A Beautiful Time.” Nelson also is nominated in the best roots gospel category for “The Willie Nelson Family,” a collection with his children and sister that Castle didn’t engineer.

He’s crafted projects for a range of artists during his career that includes Reba McEntire, Kenny Chesney, Grace Potter & the Nocturnals, Sheryl Crow and Dr. John.

The official audio for the title song of “A Beautiful Time” is available below.

Scott’s collaboration with for KING & COUNTRY, “For God is With Us,” is part of the duo’s album “What Are We Waiting For?”

Lady A — Scott, Dave Haywood and Charles Kelley — won the first of their five Grammys in 2009 for “I Run to You,” then commenced a two-year sweep through the country album, performance and record of the year categories that also earned 1980 recording industry alumnus L. Clarke Schleicher three engineering Grammys.

The trio, originally called Lady Antebellum, changed its name in 2020 in the wake of Black Lives Matter protests to remove slavery-related connotations.

The official “For God is With Us” video is available below.

The Department of Recording Industry at MTSU, part of the College of Media and Entertainment, trains song creators and performers in its Commercial Songwriting Program, experts in recording live music and audio in its Audio Production Program, and music entrepreneurs, including managers and publishers, in its Music Business Program.

NBC News in 2019 began calling MTSU a “Grammy-winner factory” in the wake of its alumni students’ and staffers’ multiple nominations and wins.

MTSU alumni, former or current students, and faculty from across the university have been a part of more than 134 Grammy Award nominations in the last two decades.

The number of MTSU-connected Grammy winners since 2001 currently stands at 15 people with a total of 37 Grammys, including nine repeat recipients, in categories from classical to pop to rock to country to gospel.

The Department of Recording Industry and the College of Media and Entertainment are currently marking an eighth year on Billboard‘s latest international list of top music business schools, once again earning acclaim for the program’s diversity, depth and longevity.

For more information about the Department of Recording Industry at MTSU, visit https://mtsu.edu/recording-industry.

More details about the 65th annual Grammy Awards are available at https://Grammy.com.