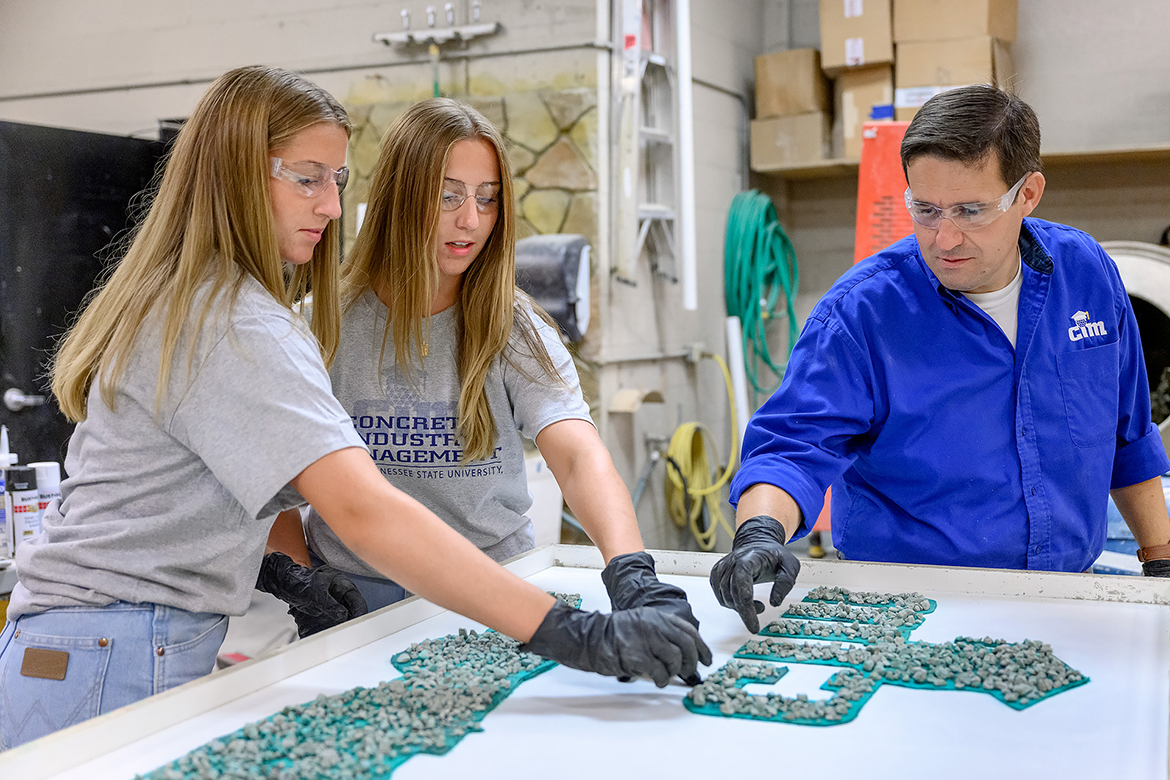 Middle Tennessee State University’s School of Concrete and Construction Management reconnected this week with the Big Machine Music City Grand Prix for the second year of their continuing partnership.

MTSU worked with the Grand Prix last year to develop a special lighter weight and more durable mix for the concrete barriers around the track, as well as concrete pads along pit row.

The Gates sisters will be at MTSU’s Concrete Industry Management booth at the Grand Prix this weekend to share their experiences in the program. They also prepared a special commemorative panel that will on display at the MTSU booth to celebrate the partnership between the Grand Prix and the University.

MTSU’s Charlie and Hazel Daniels Veterans and Military Family Center will also be featured during the Grand Prix’s Freedom Friday events and throughout race weekend as part of the recognition of active duty and veteran service members.

“We will tell people coming to the grand prix about the (CIM) program and the outcome of coming out of college with a degree and what you can do with that,” Kayla Gates said.

Ashley Gates said they will be there to show “the finished panel and how it turned out and be there all day to share our personal experiences, the fun things we get to do in the program and promote (concrete) — try to get more people interested in concrete and construction.”

MTSU and the CIM program are one of many sponsors of the grand prix, with the main race at 2:30 p.m. Sunday, Aug. 7.

Kayla and Ashley Gates, who come from a family totally immersed in this industry, will be in Huntsville, Alabama, Wednesday, Aug. 3, presenting their research findings to U.S. Space and Rocket Center and Marshall Space Flight Center officials.

During Day One of IndyCar race events Friday, Aug. 5, the Gates sisters will be at the Somero Enterprises booth at the track (lot R2 of the Fan Zone), talking about their experiences in the program and also in the NASA Minority University Research and Education Project, or MUREP, as part of a partnership with Drake State, a historically black college in Huntsville.

Their research is aimed at getting minorities and underrepresented students more involved in university programs tied to science, technology and manufacturing.

Somero, a partner with MTSU’s concrete program, designs, manufactures and sells equipment that automates the process of spreading and leveling large volumes of concrete for commercial flooring and other horizontal surfaces, such as paved parking lots.

The Gateses’ older sister, Autumn, is a recent MTSU CIM alumna working as a sales rep for Irving Materials Inc., or IMI. Their father, Clark Gates, works in sales of fly ash in the industry. Even grandmother Betty Gates has a concrete background.

The 21-year-olds, Strong and Jon Huddleston, clinical associate professor and CIM director, gathered Monday, Aug. 1, in Nashville for a 30-plus-minute visit with Cotman.

“They (MTSU CIM) were obviously instrumental because we came here to create a mix that we weren’t trying to duplicate at other places around the world, and we relied on them to get us through,” said Cotman, who pointed out barrier features and mentioned a 20- to 25-year life span for them.

MTSU supplied a special mix of concrete that Autumn Gates and other students helped evaluate last year and used to create nearly 2,000 barriers throughout the 2.17-mile track in the downtown area near Nissan Stadium, home of the Tennessee Titans.

“Not just are there new products, (but) are there recyclable products, what kind of products can we use that meet these parameters and can get the strength we need, plus the longevity that we’re looking for out of the barriers?” said Cotman, a New Zealand native who has been in this business since 1982.

“We were in contact weekly for the first two months, until we decided to pour them,” he added. “Once we actually poured the mold, we had a couple of pour samples taken and went back to MTSU again, had them check them for us and went from there. Without them, we would’ve been struggling.”

Grooming the Gates for success

The family history in the concrete industry is a plus for both young women who graduated from Riverdale High School and had the signature CIM program literally in their backyard.

Both are strong academically and both are business minors. Kayla Gates has a 3.71 GPA while Ashley has a 3.7.

Strong, who became director in August 2020, said the Gateses display great work ethic and have tremendous futures in the industry. Huddleston added they both have received great industry exposure.

The MTSU Daniels Center will assist the Harbaugh Foundation in the operation of a new feature at the Grand Prix – the Patriots’ Outpost.

Located in the Bridge Building, adjacent to the John Seigenthaler Pedestrian Bridge at the Cumberland River, and open all three days of the Grand Prix, the outpost will be open to military members, veterans and their families as a place to escape the heat, enjoy food and beverages.

Retired Army Lt. Gen. Keith Huber, MTSU’s senior adviser for veterans and leadership initiatives, along with Daniels Center Director Hilary Miller and other staff members, will be on hand to answer questions for veterans and active-duty military. The U.S. Department of Veterans Affairs and other veteran service groups will also have tables and representatives at the outpost.