He is True Blue

Timothy Ryan Buckley is looking to make you laugh . . . 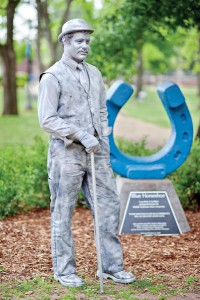 College is traditionally a time to try new things. Living away from home for the first time often gives students the courage to explore

new interests and develop new skills. Some may reinvent themselves completely.

In 21-year-old Timothy Ryan Buckley’s case, a second persona developed once he got to MTSU.

“My roommates were street-performing musicians,” Buckley explains, “but I’m not a musician. So I began watching videos online of street performers in the French Quarter. They were covered in paint, and they moved slowly like statutes to entertain the crowd.”

Inspired, Buckley developed his own character, “Mr. Gray,” a “living statue” covered in gray paint who wears a derby hat and carries a briefcase for collecting donations. Mr. Gray made his debut about two years ago in front of a deli where Buckley was making minimum wage. He admits that even after much private preparation he was very nervous to take his public plunge. But there was a payoff for his effort.

“I have a slight natural tremor anyway that is hard to control, and when I’m nervous my hands really shake,” he says. “I could not stay still that day, but I must have looked still to everyone else. I made money!”

Depending on the event, Buckley (a mass communication major minoring in art) says he can make more than $100 an hour performing. But he’s not in it only for the money.

“Performing as Mr. Gray is really fun to do and brings happiness to people,” he says, “especially kids.”

Buckley tries to perform at every MTSU home football game. He’s often seen at Raider Walk, a pre-game ritual where many MTSU alums see him perform without knowing who he is or even that he’s a student. 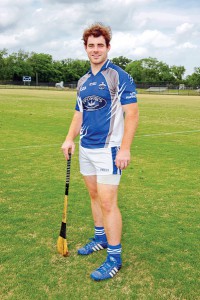 Mr. Gray isn’t the only thing Buckley has brought to MTSU: he and a friend also introduced a new club sport.

During study abroad in Ireland last year, he and fellow student Jamie Norris discovered the game of hurling, a 3,000-year-old Gaelic sport believed to be one of the oldest field games. Players try to advance a ball (or “sliotar”) downfield and score goals with curved, flattened clubs called hurleys. (Think lacrosse without the webbing or rugby with cudgels.) With its flurry of sticks and players flying up and down the pitch, hurling is both an ancient sport from which others have evolved and an adrenaline-fueled extreme sport for modern times. (The first recorded account of hurling dates back to 1272 B.C., when the town of Fir Bolg and invaders from Tuatha De Dannan tuned up for the real fight by batting the ball around.)

“Hurling combines all the sports I love and puts them all to shame,” Buckley says.

Again inspired, Buckley and Norris started the MT Hurling Club—the only one in Tennessee. They recruited players and corporate sponsors including O’possum’s Pub, apparel manufacturer O’Neill’s, the Gaelic Athletic Association, and Authentic Ireland Cultural Enrichment of Brentwood. The team became an official MTSU sport club in September 2011. Without NCAA or University sanction, the team can’t be called Blue Raiders, so they are the Wolfhounds instead.

“We have 12 active members now, and we’ve played against Purdue and Indiana universities as well as the City Club from St. Louis,” Buckley says. The team has also traveled to Lexington and Orlando to compete.

Between his twin passions of artistic performance and sport, Buckley is piecing together an impressive, albeit unconventional, résumé at MTSU. Whether Buckley will find a way to combine things as different as Mr. Gray and hurling into a single career remains to be seen, but he’s certainly going to have fun trying.