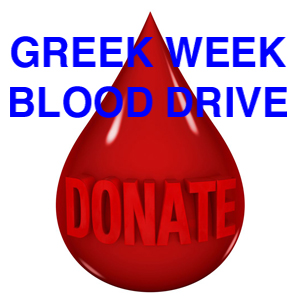 MTSU’s fraternities and sororities are taking strides to ensure this year’s Greek Week Blood Drive will be much more effective than in previous years.

Greek Week chairman Kyle Kutler has taken the reigns for organizing the event after spending the previous year as a committee member.

“It’s taken a lot of preparation for us. We’ve been working since fall semester on Greek Week as a whole. Our committee is made up of about 10 students from different Greek organizations. So we’ve just come together and put our ideas together,” said Kutler.

The Office of Fraternity and Sorority Life has partnered with Blood Assurance, a nonprofit regional blood center, for the event. All blood donated will be given to local Rutherford County hospitals and clinics, which is an important point.

“Blood Assurance only deals with hospitals in our area so the blood isn’t going to another state,” added Kutler. “It’s staying right here and you can see the families it helps and the lives it saves.”

The blood drive will be held from 10 a.m. to 3 p.m. Monday and Tuesday in the parking lot behind MT One Stop on the east side of campus. To schedule an appointment, students should text 931-797-0263, but walk-ins are welcome.

All donors will receive a free T-shirt.

It is the change of venue that has Kutler optimistic that the organization can improve their turn out from last year’s drive, which was held on Greek Row.

“We honestly didn’t have a good turn out last year. We roughly had 40 people total come. Last year it was on Greek Row, and we feel a lot of students didn’t come, because it was just so far from campus and there wasn’t a lot of good parking,” he said.

Not only has the organization changed the location, but they’ve also increased marketing efforts. In recent days, various Greek representatives including Kutler have been stationed in the Student Union atrium passing out packets and getting people to sign up.

Kutler said the goal was to get 50 people to commit to giving blood, and as of Wednesday afternoon over 25 students had already signed up, placing the group halfway toward its goal.

“We just want to have as many people as possible come out. Last year it was a last minute thing, but now we’ve put more time in it. It’s a good cause and an easy way to save lives.”