MTSU’s Student Food Pantry received a significant helping hand in replenishing its stock this week thanks to a friendly competition among the university’s fraternities and sororities.

This spring’s recent Greek Week food drive collected 7,764 nonperishable items and $2,084.50 in funds to help ongoing operations of the pantry, which is free to MTSU students in need and has seen increased usage since its opening several years ago. 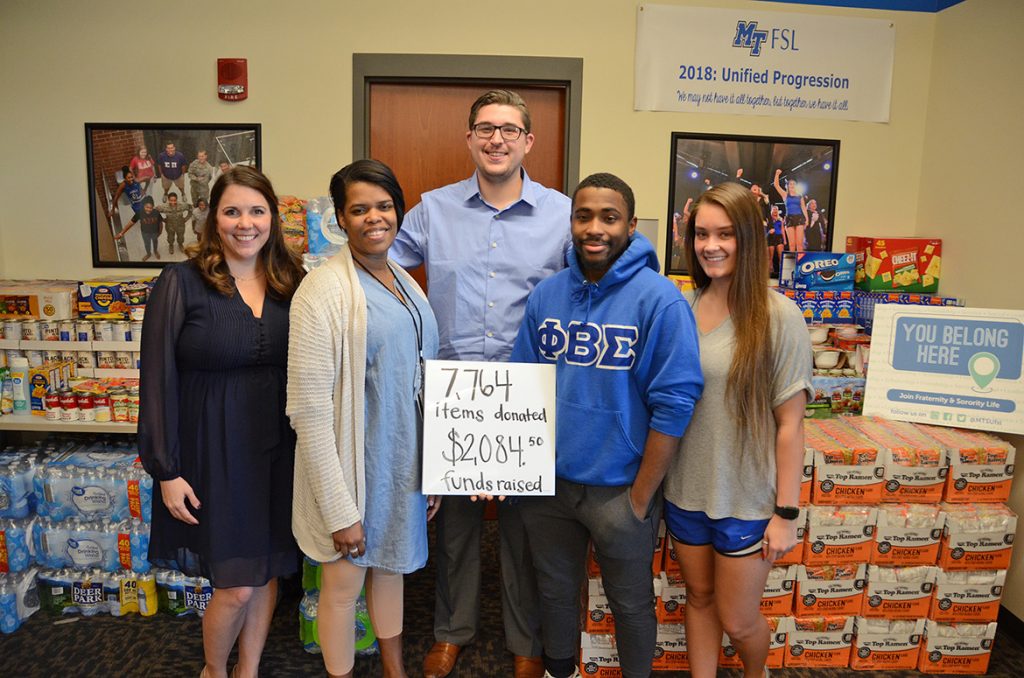 MTSU Fraternity and Sorority Life, led by Director Leslie Merritt, has encouraged Greek organizations to support the pantry in recent years as part of its annual Greek Week Celebration.

A friendly competition has formed based on a tracked points system, resulting in Greek organizations setting up donation tables and online donating campaigns to gain a competitive edge.

Support buttons are shown outside of the offices of MTSU Fraternity and Sorority Life. (MTSU photo)

The fruits of that effort were delivered Monday from FSL’s Offices in the Student Union to the Student Food Pantry, which located inside the MT One Stop on the second floor of the Student Services and Admissions Center.

“One of the things we like to do (for Greek Week) is a ‘give back,’” said senior Alex Revor, a member of Chi Omega sorority and Greek Week committee chair.“This year we were really enforcing a points system to kind of put a competitive edge to this week because we all love to compete. … The numbers are way higher than last year as well.”

MT One Stop outreach coordinator Danielle Rochelle, who oversees the pantry, said this year’s Greek Week drive was particularly timely because a very popular and critical item — no, not Ramen noodles — was out of stock.

“It’s especially helpful because right now we are out of water, and they are donating quite a bit of water, so that will help us get through the rest of the year,” Rochelle said. “That is one of the main things that students will grab for each visit.”

Rochelle said ready-to-eat packaged food items such as pop tarts and similar snack foods that students can eat in between classes remain popular, but other “quick meal items” that require a little prep such as noodles, macaroni and cheese, and hamburger helper stay in demand as well.

“We greatly appreciate Greek Life and all that they for us each year and this annual drive is something that we look forward to because it definitely helps fill some gaps and holes that we have in our pantry and it shows that MTSU students are willing to help one another out all year round,” she said. 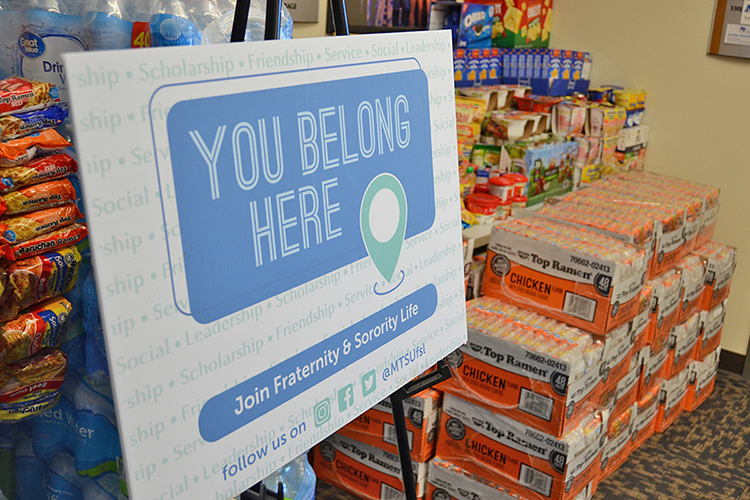 Donated food items from this year’s Greek Week food drive await pickup to be transported to the Student Food Pantry located inside MT One Stop. (MTSU photo by Jimmy Hart)

Junior Deshaun Covington, a member of Phi Beta Sigma fraternity and a Greek Week committee member, said he was proud to see the mountain of donations from this year’s drive, held April 15-18 this yearand which more than doubled the results of last year’s effort (3,000-plus items).

“I’m proud of our Greek Life,” said Covington, who was among those helping load items for transport Monday. “It just shows that Greek life’s not just about partying and having fun, it’s actually also about giving back to the community.”