Forensic anthropologist is on ..

Griffey Sr. hits it out of the.. 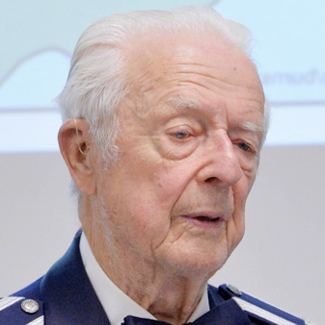 The leader of the aviation squadron whose surveillance flights over Cuba helped avert nuclear war told an MTSU audience the previously untold story behind the missions.

With a map showing Cuba’s proximity to the United States in the background, retired U.S. Air Force Col. William “Greg” Gregory explains the mission of his reconnaissance pilots during the 1962 Cuban Missile Crisis to an audience at MTSU April 2. (MTSU photo by Andy Heidt)

The 93-year-old Gregory flew his first airplane as an MTSU student in 1940, but World War II interrupted his academic career when he was a junior.

After volunteering for the U.S. Army Air Corps, Gregory flew missions over North Africa and Europe.

Following the postwar creation of the U.S. Air Force, Gregory served as commander of a squadron of U-2 pilots who identified the buildup of Soviet missiles in Cuba in 1962. He said the makeup of the squadron was “one of a kind.”

“I had more civilians than I did military, although I did have Air Force officers and NCOs (noncommissioned officers) and enlisted personnel,” Gregory said. “I had a lot of CIA (Central Intelligence Agency) civilians that were in charge of security and communications.”

The rest of the squadron included civilian pilots and Lockheed mechanics, four British officers, a flight planner, a physician and a Navy lieutenant commander.

That “one-of-a-kind” squadron took the photographs that confirmed the presence of Soviet missiles only 90 miles from American soil, prompting an international diplomatic showdown that tested President John F. Kennedy’s leadership.

“President Kennedy deserves a lot of credit for avoiding this war, because we really could have had a terrible situation if we had knocked out those missiles,” said Gregory.

“I think they (the Soviets) certainly would have fired back.”

Gregory served for more than three decades in the U.S. Air Force as a commander and pilot. Even though he did not graduate, he maintains close ties to MTSU, even creating a scholarship for students from Trousdale and Macon counties.

He retired from active duty in 1975 and worked for 15 years as assistant director of workers’ compensation in the Texas attorney general’s office.