Griffey Sr. hits it out of the park as conference ...

Griffey Sr. hits it out of the park as conference closes (+VIDEO) 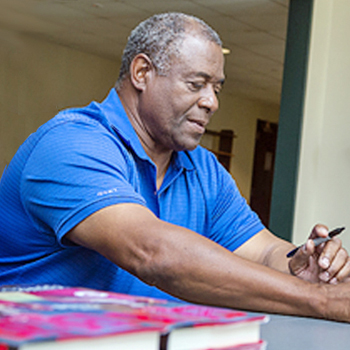 Middle Tennessee State University rolled the tarpaulin over the infield April 3 and said goodbye to the Baseball Literature and Culture Conference.

Ken Griffey Sr., right, signs a copy of his book, “Big Red: Baseball, Fatherhood and My Life in the Big Red Machine,” for Brian Steverson of Knoxville, Tennessee, at the Baseball Literature and Culture Conference at MTSU April 3. (MTSU photo by J. Intintoli)

The gathering of baseball aficionados and scholars will be hosted next year by Ottawa University in Ottawa, Kansas, about 100 miles from Kansas City, Missouri.

“Strategically, it makes some sense,” said Andrew Hazucha, a professor of English at Ottawa University, who will be coordinating the conference next year.

In addition to the presence of the Kansas City Royals major league team about 100 miles up the road, Hazucha said, “the Negro Baseball Hall of Fame is in Kansas City. In Lawrence, Kansas, 20 miles from Ottawa, Bill James, the statistician lives. You have Haskell Indian Nations University in Lawrence, Kansas, where Jim Thorpe attended school.”

“We’ve done it for 10 years,” added Warren Tormey, a professor of English at MTSU and co-coordinator of the conference with fellow English professor Ron Kates. “We’ve had a great run. The time is right to pass it on to a new set of organizers.”

Griffey Sr., the father of 13-time All-Star Ken Griffey Jr., now is a roving instructor for the Reds as well as the author of a new book, “Big Red: Baseball, Fatherhood, and My Life in the Big Red Machine.”

He said he tells young up-and-coming players that persistence is the key to a successful major league career.

“They think they have to hit 50 home runs, drive in 150,” said Griffey. “Instead of that, just be steady — steady and consistent, and they’ll find out they’ll be up there a lot longer.”

Griffey Sr. criticized modern changes in the game, such as the experimental 20-second pitch clock and the option for managers to call for an instant replay ruling on an umpire’s call by throwing a flag onto the field.

“When you have a manager who has to have a flag in his back pocket, that’s crazy,” Griffey said.

Commissioner Bart Giamatti banned Rose from the sport in 1989 amid reports he gambled on baseball. Griffey said the all-time career hits leader should be inducted into the Hall of Fame.

“I played with Pete for six years, and he was probably more of a teammate than anybody I’ve played with, ever,” Griffey said. “People don’t know that about Pete. All they see is his hard-nosed tactics out on the field.”

You can watch an excerpt from Griffey’s talk below.