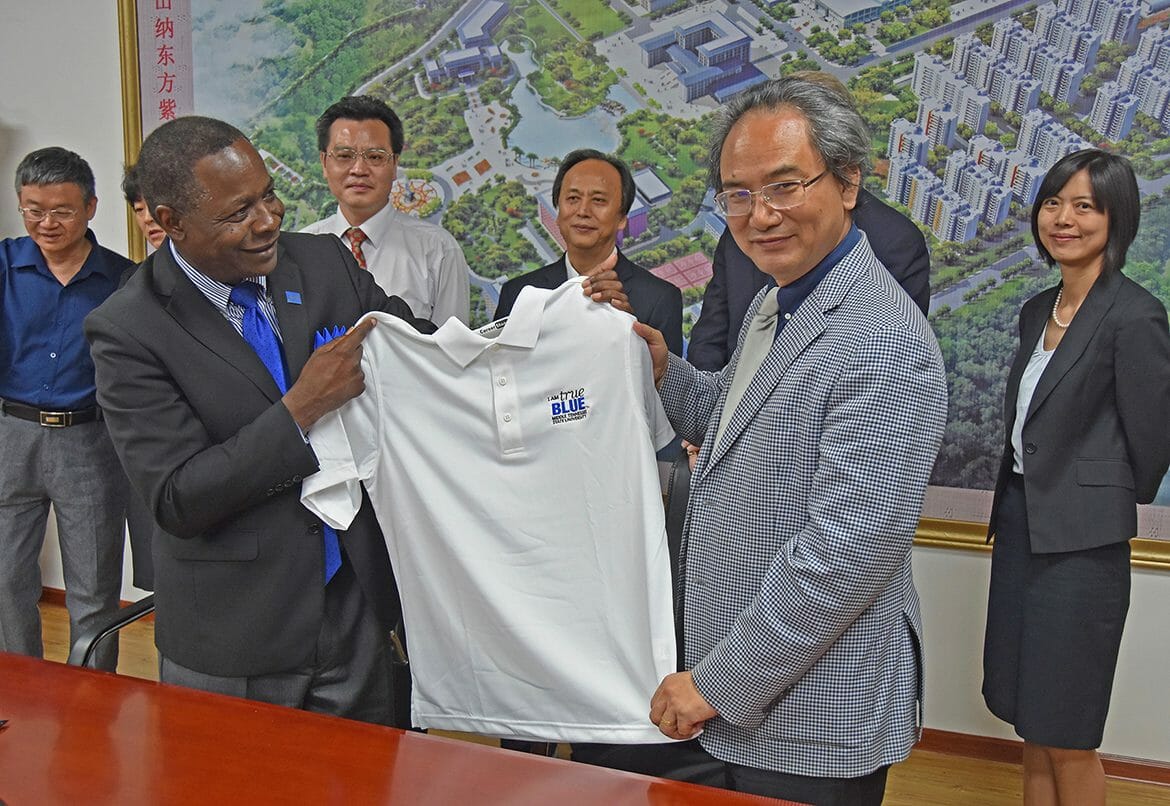 NANNING, China — Middle Tennessee State University’s swing through China ended Tuesday, May 22, with visits to two universities in Nanning — one that has a long-standing partnership with the Murfreesboro campus and the other one hoping to develop a relationship.

MTSU President Sidney A. McPhee met the new leader of Guangxi University, Zhao Yueyu, before delivering a lecture to prospective study-abroad students. It was the first meeting between Zhao and McPhee, as the Guangxi president assumed his leadership role about a year ago.

MTSU President Sidney A. McPhee presents a True Blue tie to President Zhao Yueyu of Guangxi University on Tuesday, May 22, in Nanning, China. It was the first meeting between the two presidents, as Zhao assumed leadership of the China university about a year ago. About 40 Guangxi students are pursuing master’s degrees at MTSU. (MTSU photo by Andrew Oppmann)

McPhee invited Zhao to come to MTSU, an offer that the Guangxi president said he would act upon in 2019.

“Our relationship with Guangxi is vital to our strategic priority to increase international enrollment,” McPhee said. “We are committed to growing this partnership and looking for ways to expand it even further.”

MTSU has about 1,500 international students, with about 300 hailing from China. McPhee’s trip underscored his focus on MTSU’s international undergraduate and graduate enrollment, particularly in China, as well as research opportunities.

McPhee promised President Tang Nong that MTSU would look for ways to sync up with the institution, especially given the creation of the International Ginseng Institute, a partnership between MTSU and the Guangxi Botanical Garden of Medicine Plants to help Tennessee farmers grow ginseng.

A prospective study-abroad student from Guangxi University in Nanning, China, asks a question to MTSU President Sidney A. McPhee about the Murfreesboro campus during his lecture Tuesday, May 22, at the institution. (MTSU Photo by Andrew Oppmann)

The president’s stop in Nanning was the last in a four-stop outreach in China. It began in Beijing, then Hangzhou and Changsha before Nanning. The trip was organized by MTSU’s Confucius Institute.

McPhee said he was encouraged by the response he received during the trip from prospective students, ongoing partners and new friends.

“We’ve worked hard to get the message across that our university cares about student success on all levels, most certainly including our international scholars,” he said.

For previous stories about MTSU’s visits to China, go to http://mtsunews.com/mtsu-in-china/.

MTSU President Sidney A. McPhee presents a True Blue polo shirt to President Tang Nong of Guangxi University of Chinese Medicine on Tuesday, May 22, during McPhee’s first visit to the institution, which focuses on traditional and plant-based medicines and practices. At far right is Iris Gao, MTSU’s director of the joint International Ginseng Institute who lectured at the university. (MTSU Photo by Andrew Oppmann)