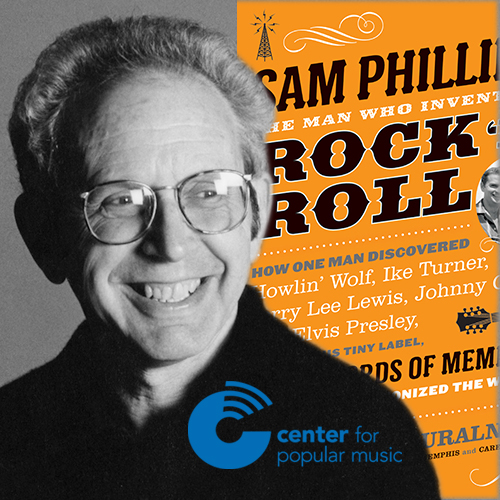 The free public event, presented by the center and MTSU’s Tom T. Hall Writers Series, is set for 4:30 p.m. Oct. 26 in Room 221 of the McWherter Learning Resources Center. A searchable, printable campus parking map is available at http://tinyurl.com/MTSUParkingMap.

Guralnick, who has written books on Elvis Presley, Sam Cooke, Robert Johnson and other American roots-music topics, co-curated a recent exhibit at Nashville’s Country Music Hall of Fame, “Flying Saucers Rock & Roll: The Cosmic Genius of Sam Phillips.” He also wrote and coproduced a documentary that shares the name of his new book, “Sam Phillips: The Man Who Invented Rock ’n’ Roll.”

“Peter Guralnick is one of the most important living music writers and biographers, a real giant among roots music and rock historians,” Reish said.

“Building on his definitive two-volume biography of Elvis Presley, Guralnick’s latest book gives us an astonishingly detailed account of another seminal Memphis figure, Sam Phillips. He is one of the most consequential popular music figures of the twentieth century, and Guralnick illuminates Phillips’ importance richly and beautifully.”

He worked in his Memphis studio with artists as diverse as Presley, Ike Turner, Howlin’ Wolf, Jerry Lee Lewis, B.B. King and Johnny Cash, bringing together black and white voices for the first time in American music history.

Guralnick’s book features extensive interviews with and firsthand observations from Phillips gathered over 25 years, along with interviews with many of the Sun Records legends.

Along with his two-volume Presley biography, “Last Train to Memphis” and “Careless Love,” Guralnick has written an acclaimed trilogy on American roots music, “Sweet Soul Music,” “Lost Highway” and “Feel Like Going Home”; the biographical inquiry “Searching for Robert Johnson”; and “Dream Boogie: The Triumph of Sam Cooke.”

He won a Grammy for his liner notes for “Sam Cooke: Live at the Harlem Square Club” and wrote the scripts for the Grammy-winning documentary “Sam Cooke: Legend” and Martin Scorsese’s blues documentary “Feel Like Going Home.” Guralnick also is a recent inductee in the Blues Hall of Fame.

The Center for Popular Music is one of the nation’s largest and richest repositories of research materials related to American vernacular music. The center and the Hall Writers Series are part of MTSU’s College of Media and Entertainment.