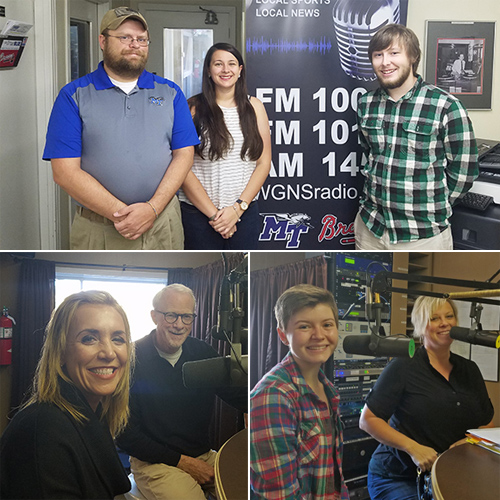 MTSU students, faculty and staff took to the radio recently to share information about an upcoming theatrical production at Tucker Theatre, a mock presidential debate and a songwriting workshop for student veterans.

The details were shared during the Oct. 17 “Action Line” program with host Bart Walker. The live program was broadcast on FM 100.5, 101.9 and AM 1450 from the WGNS studio in downtown Murfreesboro. If you missed it, you can listen to a podcast of the show here.

Guests and their topics included:

• Kristi Shamburger, assistant professor in the Department of Theatre and Dance and director of the upcoming MTSU production of the musical “Peter Pan” at Tucker Theatre; and cast member Parker Chase (playing Peter Pan), discussed the upcoming production.

“Peter Pan” will run Nov. 3-6 at MTSU’s Tucker Theatre. Shamburger, who directed MTSU’s 2013 sold-out performances of Les Misérables, returns to the director’s role to guide a talented cast of MTSU students in this family friendly production. Tickets will be $13 for general admission, $8.50 for seniors 55 and older and K-12 students, and free to MTSU students, faculty and staff with valid ID cards. Tickets can be obtained online by going online to www.mtsuarts.com or at the Tucker Theatre box office before showtimes.

The team has had an impressive season thus far and will be holding an Oct. 20 mock presidential debate on campus that is open to the public. The team has started this year’s season with Top 3 team finishes and multiple individual awards during debate tournaments across the region. The group of 40 students, who participate in both on- and off-campus competitions, is the largest to date in the debate team’s history.

From left to right, Dr. Patrick Richey, director of forensics at MTSU and coach of the Blue Raider Debate Team, is shown at WGNS studios with debate team members Skye Irish and Alex Fingeroot before their appearance on the “Action Line” program. (MTSU photo by Jimmy Hart)

“Operation Song” will be held Oct. 28 at MTSU. The university continues its outstanding support of student veterans by offering a unique opportunity for them to express themselves in an original song, with support from MTSU’s internationally known Department of Recording Industry.

Student veterans will share their stories by writing songs with MTSU songwriters and Nashville Hall of Fame songwriters. The campus community is invited to hear the results at the end of the all-day songwriting workshop and hit songs from the Hall of Fame writers. Graduate students in audio will record the showcase so the veterans can take the experience home with them.

Students, faculty and staff who are interested in guesting on WGNS to promote their MTSU-related activities should contact Jimmy Hart, senior director of news and media relations, at 615-898-5131 or via email at jimmy.hart@mtsu.edu.