Schizophrenia in spotlight as .. 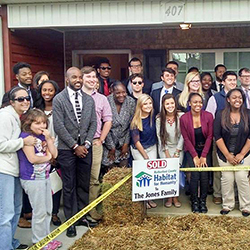 Sharnail Jones and her family are happy they are in their new home and thankful for the MTSU and community support that made it all possible.

The Jones’ home, the fifth constructed via an MTSU Habitat Blitz Build, was dedicated April 7 on South Highland Avenue near downtown Murfreesboro.

About 30 MTSU students and administrators — a small portion of all the organizations and individuals involved with the build — turned out for the dedication.

“Approximately 200 volunteers assisted with the home,” said Jackie Victory, director of the Office of Student Organizations and Service in the Division of Student Affairs.

Housing and Residential Life, Fraternity and Sorority Life, religious organizations and special interest clubs were all a part of the build, she said.

“Students raised more than $20,000 for this home in sponsorship money,” Victory said. “Fundraising is ongoing and we are already working toward our next Habitat home.”

To give to the MTSU Habitat Blitz Build program, which has an MTSU Foundation account, email Victory at Jackie.Victory@mtsu.edu.

MT Engage and Phi Kappa Phi staffed the build for one day and raised money for the endeavor, Rust added.

This is the fifth Habitat house constructed by MTSU volunteers during the past 10 years.

Jones is buying the home for herself and her children: her son Keino Franklin, 11, and her daughter KneOkei Franklin, 21, who says she hopes to enroll at MTSU and major in education.