If you’re catching a flight from Nashville’s airport these days and happen through Concourse A, you may find yourself captivated by the compelling artistry of an MTSU visual communication professor currently on display.

The latest work of Leslie Haines, a professor in the School of Journalism and Strategic Media covering visual communication and advertising design, was chosen as one of the featured exhibits at Nashville International Airport.

The YMCA’s After Breast Cancer, or ABC, Program is a free 16-week program “created for survivors by survivors to provide healing for the body, mind and spirit after a breast cancer diagnosis,” according to the airport’s website.

“It represents various ages, ethnicities and social backgrounds all affected by the same disease,” said Haines, who’s been a graphic designer for 30-plus years. “The portraits are visual stories of these women, what gives them strength, what is important to them, what motivates them.”

Affiliated with eight YMCA centers across Middle Tennessee, the ABC Program helps participants learn about healthy eating, resume or begin a regular exercise program that is right for them, and form a healing community in small group discussions of four to eight survivors led by a trained facilitator.

The airport held a reception for Haines’ exhibit in mid-September, and the Green Hills YMCA, where Haines participated in the program, recently held a reception to showcase images of the exhibit survivors in its lobby to promote the ABC program and mark National Breast Cancer Awareness Month in October.

Haines’ work puts a personal face on those stories, including her own as a breast cancer survivor.

At the airport reception, Haines epxlained how she was impressed with the Y’s use of certified trainers and how her trainer worked closely with her one-on-one, not to mention the weekly meetings with other breast cancer survivors.

“You’re in a room with other women who’ve gone through the same thing, and you can have this free and open discussion and not fear for anything,” she said. “And these women are like, ‘Yeah, I get it. I get it.’ … That was the part that brought me so much peace with everything.” 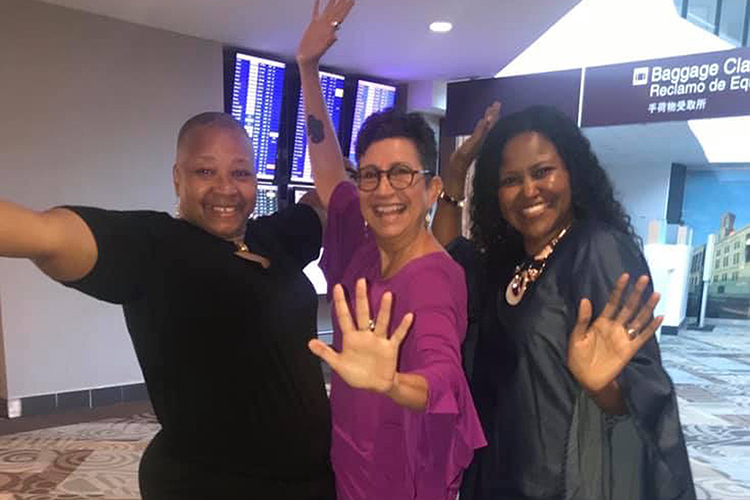 The group’s final session at Radnor Lake inspired her to take on the art project and allowed her to get to know other survivors who weren’t in her group.

Her own portrait kicked things off “because in order to sell anyone on it, I had to do my own portrait first.”

“In listening to these women, I was just so touched by how everyone had gone through this and had come out the other side and was looking toward the future,” she said.

With the help of MTSU grant funds, Haines was able to create portraits for exhibition and a copy to present to each survivor as a keepsake.

She’s now working on more grant funding to create more portraits that other survivors have requested.

“Through the artist Leslie Haines’ participation in the ABC program, she met a group of amazing women who inspired the artwork,” the airport website states.

“The portrait series is named ‘The Real Wonder Women’ because her daughter dubbed her ‘Wonder Woman’ as she underwent the rigors of breast cancer treatments. Also, the women she met at ABC were, indeed, built of Amazonian strength and fortitude. All women pictured here have benefitted from the ABC program.”

Haines’ exhibit will be on display at the Nashville Airport through Feb. 23, 2020. 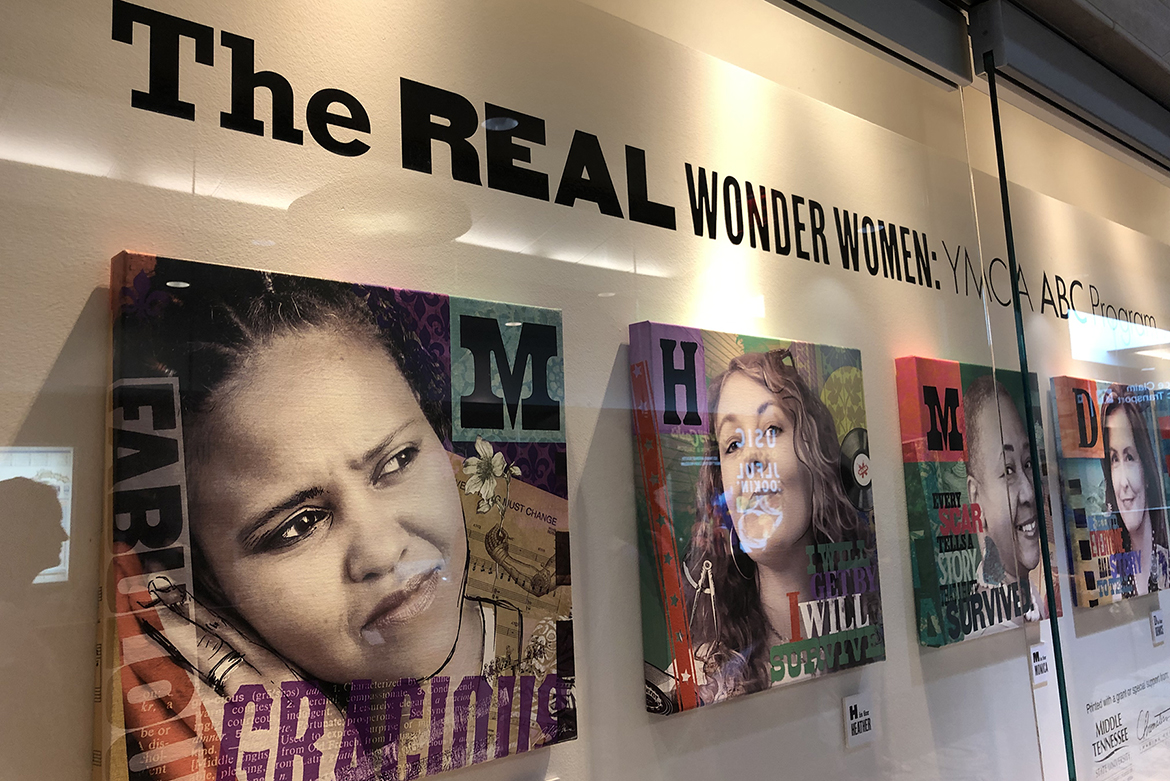 “The Real Wonder Women: YMCA ABC Program” exhibit wall is shown at Nashville International Airport. Leslie Haines, a visual communication professor in the MTSU School of Journalism and Strategic Media and a breast cancer survivor, created a series of 12 portrait illustrations of fellow survivors who participated in the YMCA program. The exhibit will be on display until late February. (Photo submitted) 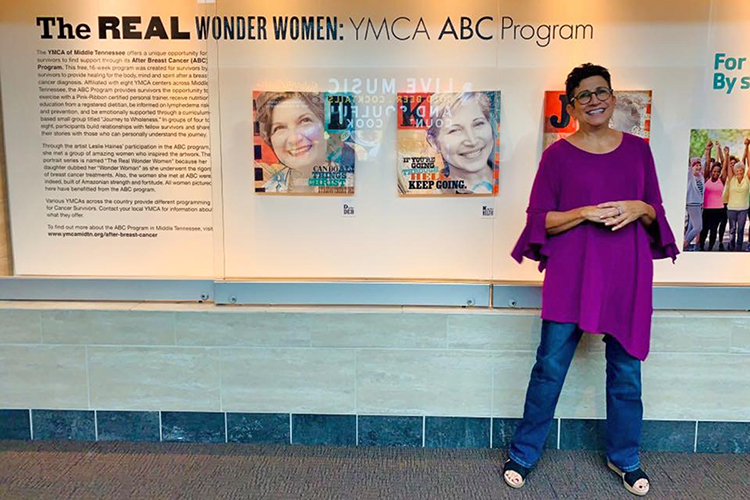 Leslie Haines, a visual communication professor in the MTSU School of Journalism and Strategic Media and a breast cancer survivor, poses in front of her work at the Nashville International Airport in September during a special reception for her art exhibit. Haines created a series of 12 portrait illustrations of fellow breast cancer survivors, “The Real Wonder Women: YMCA ABC Program,” that will be on display until late February. (Photo submitted) 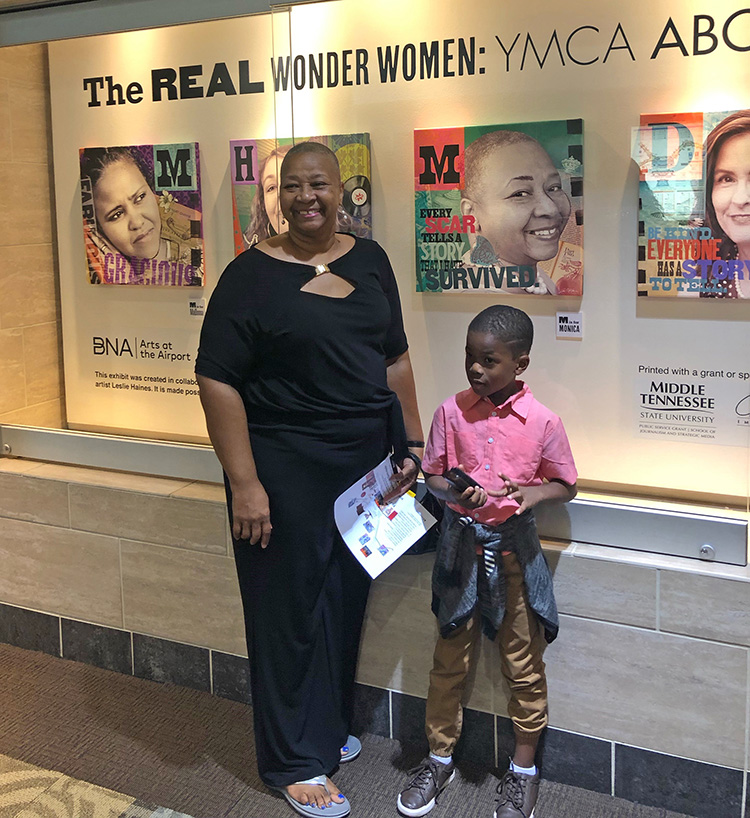 Breast cancer survivor Monica McGuire and family friend Harper Fields pause at the Nashville International Airport in September during a special reception featuring the exhibit of MTSU visual arts professor Leslie Haines. Haines, also a breast cancer survivor, created a series of 12 portrait illustrations of fellow survivors, “The Real Wonder Women: YMCA ABC Program,” that will be on display in Concourse A of the airport until late February. (Photo submitted)