Veterans and currently active military will once again have their day, MTSU style, during the 38th annual Salute to Veterans and Armed Forces game activities.

Since 1982, as a part of the nation’s annual Veterans’ Day, MTSU has held events — memorial service, Veterans’ Picnic, Dr. Joe Nunley Award and patriotic halftime show — all centered around an MTSU football game as the university recognizes the many heroes serving their country. 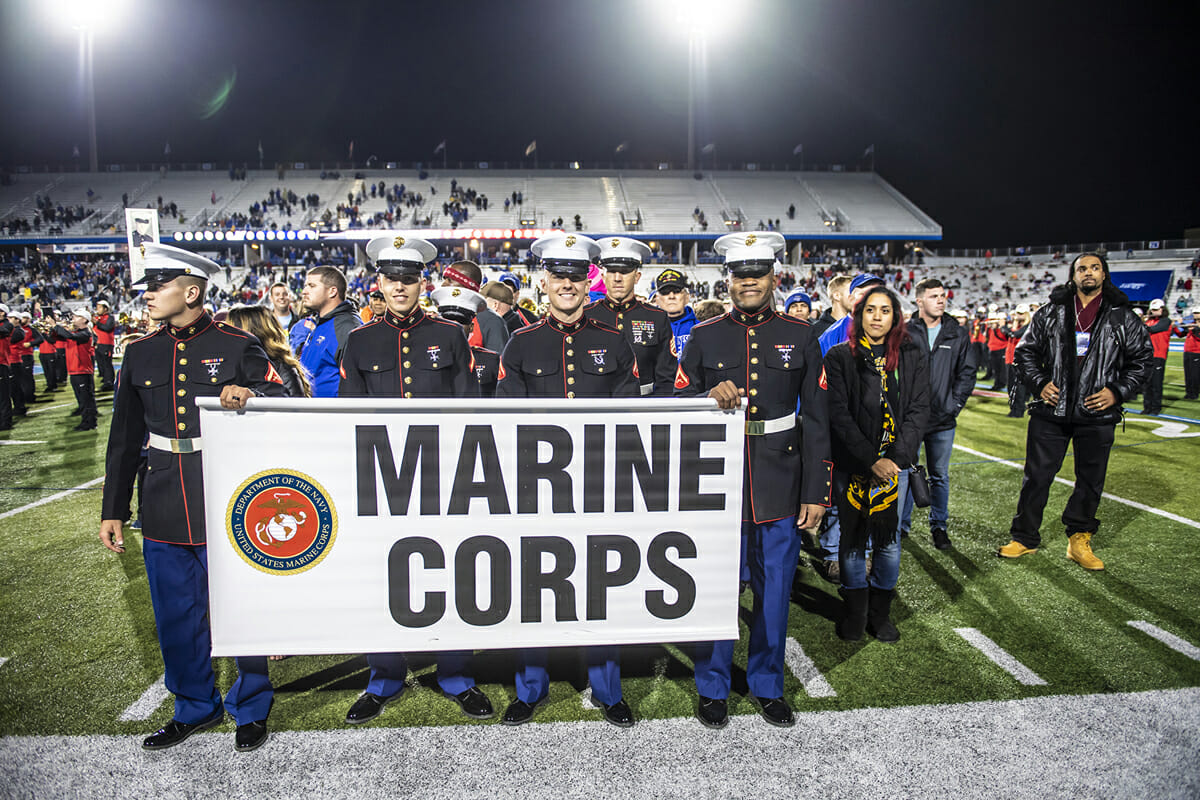 A group of U.S. Marine Corps active-duty personnel and veterans walked across Horace Jones Field in Floyd Stadium during the 37th annual Salute to Veterans and Armed Forces in November 2018. The halftime salute was part of saluting vets for their service with numerous activities. (MTSU file photo by Eric Sutton)

• Halftime — MTSU Band of Blue tribute to Air Force, Army, Coast Guard, Marines and Navy as veterans and active duty military march across the field while their branch’s theme is played.

“It means a lot. Most veterans appreciate receiving recognition for their service,” said alumnus Don Witherspoon (Class of 1964 with economics degree) and retired U.S. Marines captain. “My wife, Hanna, encouraged me to walk on the field early on. Working with several veteran’s committees, the first time I marched, it really meant a lot. As a Vietnam-era veteran, it was quite a different reception — cheering instead of jeering — that we received.”

A committee chose Witherspoon to receive the 2019 Nunley award. He received the Navy Commendation Award with Combat “V” for service during one of his Vietnam tours. He worked 33 years for Pfizer Inc., retiring in 2000 as logistics director. Witherspoon has served on various community boards, including past president of both the MTSU Foundation, National Alumni Association and Blue Raider Athletic Association. 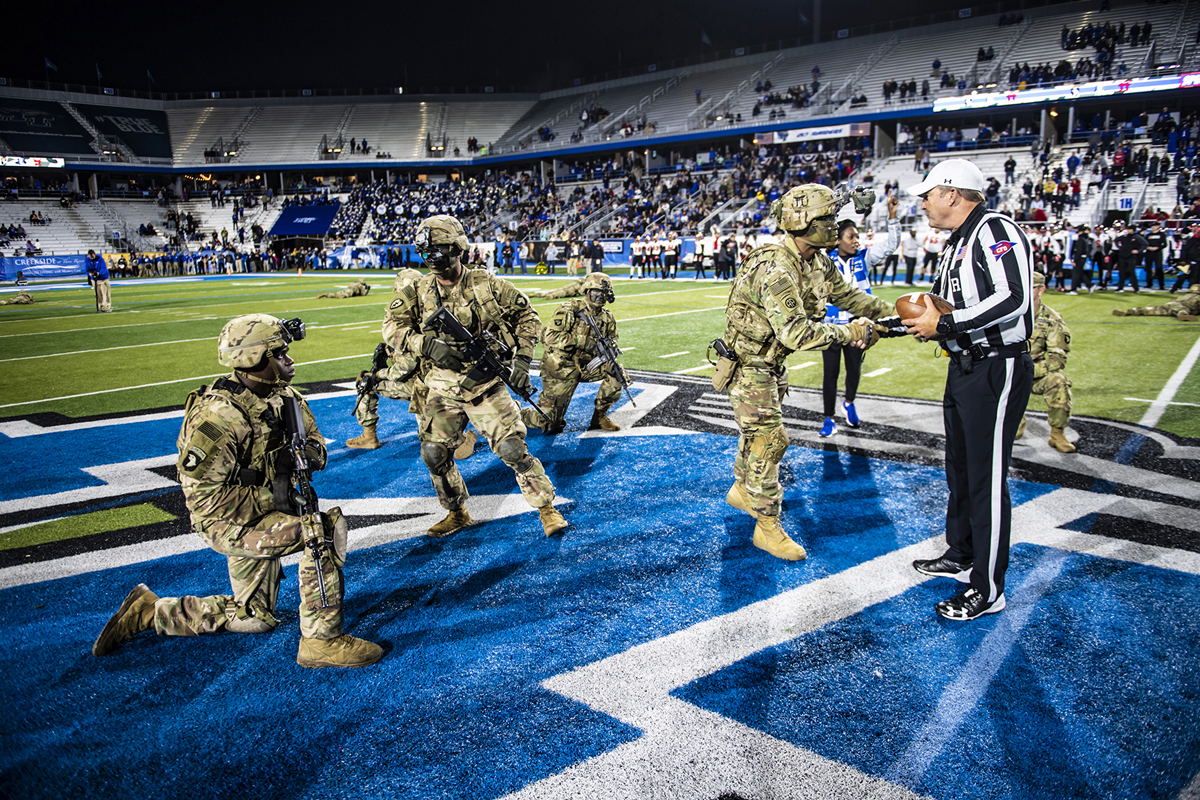 Soldiers from the U.S. Army’s Fort Campbell installation delivered the game ball to officials on the field in November 2018 during the 37th annual Salute to Veterans and Armed Forces game. Twenty-two soldiers flew by helicopter, which landed on the football practice field. (MTSU file photo by Eric Sutton)

Vets will be served food provided by Mission BBQ and sponsored by Mid-South Ford. State Farm is providing complimentary tickets to the game for veterans, service members and their families.

Middle Tennessee is also teaming up with the U.S. Marine Corps’ Toys for Tots program. At each gate, a Toys for Tots cart will be available for unwrapped, new or gently used toy donations.

Families from A Soldier’s Child organization will be honorary game captains.

For fans attending the game, if you do not have a complimentary ticket given to veterans and family members, you must purchase in advance or at the gate. 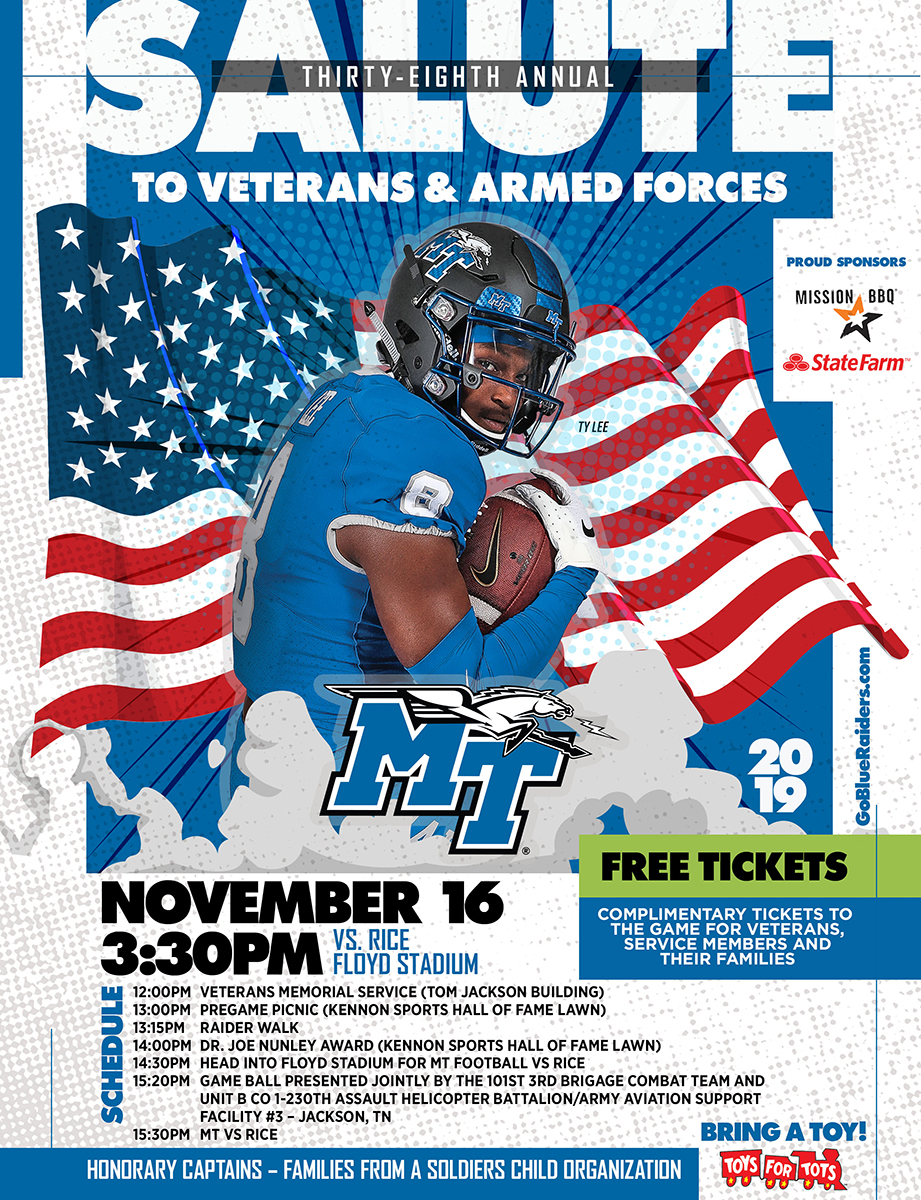