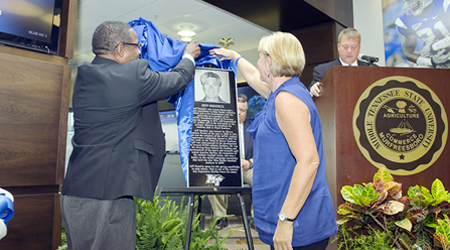 MTSU hosted  a grand opening and ribbon-cutting ceremony for the new Jeff Hendrix Stadium Club at Floyd Stadium on Aug. 20, welcoming the public to a facility renovated from a cinder-block room into a comfortable, state-of-the art gathering place thanks in part to a $1 million donation from the Hendrix estate.

MTSU President Sidney A. McPhee, Director of Athletics Chris Massaro, Associate Athletic Director Alan Farley and members of the Hendrix family were on hand for the event.

“This stadium club elevates the stature of our athletics program, and it certainly will enhance the experience of those attending Blue Raider football games for many of our devoted fans,” McPhee said. “Jeff has left indeed a great legacy that our student athletes and our fans will benefit from for years to come.”

“We’d rather have him here than the gift, but we wanted to do something permanent with the gift,” added Massaro. “I believe this is a game-changer for us. This is going to set new attitudes about how people perceive Blue Raider football and Blue Raider athletics.”

MTSU President Sidney A. McPhee, left, is joined by Kay Hendrix to unveil a plaque honoring the late Jeff Hendrix at the Aug. 20 dedication and ribbon-cutting ceremony for the Jeff Hendrix Stadium Club in Floyd Stadium. Associate Athletic Director Alan Farley is behind the podium. $2.3 million in donations from the Hendrix estate and the Emmett and Rose Kennon estate made the renovations possible. (MTSU photo by J. Intintoli)

The club, located between the 30-yard lines on the west side of Floyd Stadium, features more than 550 outdoor chair-back seats with an ideal view of the Blue Raiders’ gridiron action.

In-game concierge service is also available for all stadium-club patrons so no one has to miss a minute of the action. Access is quick and convenient by way of exclusive elevators from the ground level.

Other MTSU athletic projects aided by Hendrix’s donations and fundraising efforts are renovations to the baseball stadium and the Dean Hayes Track and Soccer stadium, enhancements to men’s and women’s basketball locker rooms and development of a new golf-team training facility.

The late Hendrix was a devoted Blue Raider supporter whose $1 million estate gift in December 2011 was the largest unrestricted donation in MTSU athletics history. He also was the posthumous recipient in April of the Chancellor’s Award for Excellence in Philanthropy from the Tennessee Board of Regents.