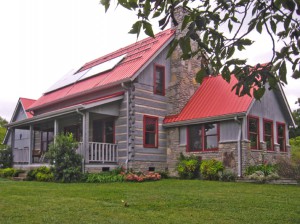 Dr. Carol Boraiko’s future is so bright, she has to wear shades.

Boraiko, an associate professor in the Department of Engineering Technology, turned her joy at going solar into an experiential learning event by inviting Dr. Kathy Mathis’ solar design class to witness the installation of 20 solar panels on her roof by Lightwave Solar Electric of Nashville.

“Up until this point, we’ve been learning on the Web and with slides,” said Mathis, Boraiko’s departmental colleague, at the gathering at Boraiko’s Lascassas home. “But to come out and talk to the installer and the client—it’s perfect!”

Boraiko’s house is not totally off the grid, but she will be offsetting her electric bills with the electricity she generates from her solar panels and sells back to TVA. Her startup costs are $26,000, which will drop to $17,000 with the tax credit she’ll receive.

To complete the MTSU solar circuitry, Tyler Stokes, an MTSU alumnus who now works for Lightwave while working on his master’s degree, sold Boraiko on the idea of investing in solar energy after making a presentation to one of her classes.  He explained how the science works as some 25 students gazed at the gleaming cells atop Boraiko’s burgundy-colored roof.

“The cells just act as a pump to pump the electrons through the coil in the transformer,” Stokes said. “The transformer then induces an alternating current in the inverter, which then feeds into the grid.” 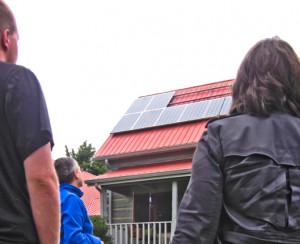 Lightwave President Steve Johnson, who arrived on the scene in an energy-efficient Leaf electric car, said Boraiko’s cells have a 25-year production warranty and a 10-year full replacement warranty. He figures they will last between 35 and 50 years.

But what about the standard American consumer frustration of planned obsolescence? Don’t these things wear down?

“They lose a little efficiency,” Johnson said. “A general standard for the industry is half a percent a year. I expect these will probably lose more like point-two percent.”

For Boraiko, it’s an opportunity to put her technology where her teaching is.

“Personally, I think it’s a real good contribution to saving energy and to improving the world,” she said. “And, as a scientist, I just think it’s so cool because I can stand out there, look at the sun and see how it’s turning into electricity to power our house.”