Take a journey with 'Exodus Pr..

Music City all-stars are bringing Charles “Pa” Ingalls’ old-time fiddle music and songs alive for a PBS special, and MTSU will be right by the fireside.

Dr. Dale Cockrell, director of MTSU’s renowned Center for Popular Music and a scholar of the early American tunes immortalized in Laura Ingalls Wilder’s “Little House on the Prairie” book series, is coordinating aspects of the music special. It was taped Jan. 6 in Nashville.

MTSU students worked behind the scenes to film “The Making of Pa’s Fiddle,” a documentary on the inspiration, creation and execution of the special. The students’ documentary will accompany the PBS special in a planned DVD package.

“Pa’s Fiddle: The Music of America” will be broadcast during the 2012 June pledge-drive season on PBS stations throughout the nation. A new CD, “Pa’s Fiddle: American Fiddler,” featuring a portion of the 127 songs mentioned in the “Little House” books, will be released at the same time. The CD will be in stores June 5 but is available now as a pre-release special at www.laura-ingalls-wilder.com.

“It’s terribly exciting to see this all finally happening,” said Cockrell, who also is a professor emeritus of musicology at Vanderbilt University.

“But as exciting as it’s been for me, it’s even more exciting to see these excellent musicians get so excited about playing this music. They don’t get the opportunity to do that very much, and to see them almost melting in the studio in the presence of this great music is a wonderful opportunity.”

Cockrell, who is the founder, owner and president of Pa’s Fiddle Recordings LLC, a record label dedicated to recording the music referenced in Wilder’s books, teamed with actor Dean Butler, who played Wilder’s husband, Almanzo, in the “Little House” TV series, to create the “Pa’s Fiddle” project.

“I’ve been working on the ‘Pa’s Fiddle’ project for about 12 years now,” Cockrell explained, “and sometimes it’s felt like we’ve been pushing that boulder up that hill every day. Now we’re finally at the top and get to share this music with everyone.”

The student crew from the Department of Electronic Media Communication in MTSU’s College of Mass Communication is led by Professor Tom Neff, founder and former CEO of The Documentary Channel and an award-winning producer and director.

Six to 18 students were on-site for the special at the Loveless Barn in Nashville, and another six to 18 students will work in post-production on editing, graphics and sound with Professors Clare Bratten and Matt Foglia.

EMC major Sam Willey, a junior at MTSU, directed the behind-the-scenes documentary in Nashville. Haley Ellis, who graduated in December from MTSU, and Megan Brantley, another junior EMC major, are line producers.

“This is a wonderful learning experience for us all,” Neff said. “I’m thrilled to be involved and help students any way I can. It’s a unique and wonderful way MTSU is tying the professional world to the student world. We’re always looking for real-world projects, so this is a great mix.”

The documentary has a quick turnaround time to meet the PBS airing and sales deadline, so MTSU students will be working through the early spring to create an archival-quality product.

“Sometimes it’s a blessing for a media project to have a fast deadline,” joked EMC department chairman Billy Pittard, a multi-Emmy-winning media entrepreneur and MTSU alumnus. “It’s great to see our students shine on a project like this.”

You can view a video on the Loveless Barn project above as well as photos from the filming below. 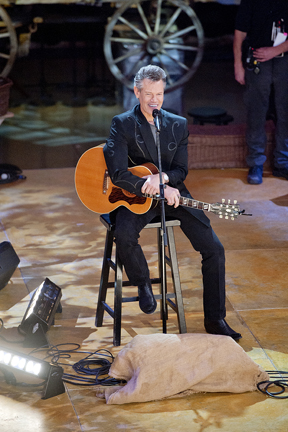 Dr. Dale Cockrell, director of MTSU’s Center for Popular Music and co-coordinator of “Pa’s Fiddle: American Music,” poses for a photo before filming begins for the PBS special at the Loveless Barn. (MTSU photo by Andy Heidt) 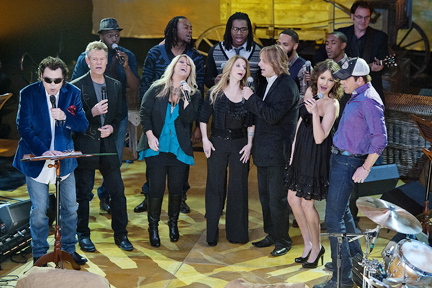