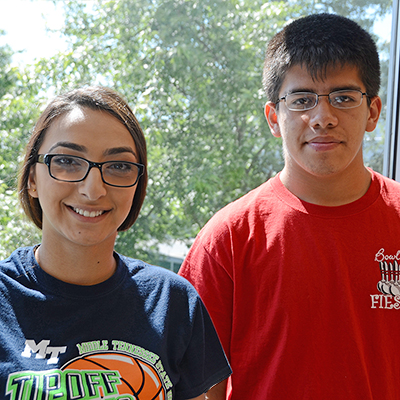 Instead of summer vacation at the beach, the Great Smoky Mountains National Park or another popular destination, local high school students Helene Hamo and Edgar Lozano are conducting chemical research in an MTSU Science Building lab for two months.

It was their choice to work with MTSU graduate students and Department of Chemistry chair Greg Van Patten after they were selected as Project SEED recipients.

Project SEED, or Summer Education Experience for the Economically Disadvantaged, is sponsored by the American Chemical Society. The summer research program gives high school juniors and seniors an opportunity to work with scientist-mentors on research projects in industrial, academic and federal laboratories.

As they discover potential career paths while approaching critical turning points in their lives, recipients receive a $2,500 fellowship and learn fundamental laboratory skills and analytical methods during the program.

An important feature of Project SEED is its emphasis on career development and its motivation of students to pursue higher education in the natural sciences.

Hamo, 17, of Murfreesboro, will be a senior at Stewarts Creek High School in Smyrna, Tennessee. Chemistry teacher Kevin Vaughn nominated her.

Lozano, 16, of Murfreesboro, will be a senior at Central Magnet School. Advanced Placement chemistry teacher Julie Mullane nominated him.

They are working under Van Patten, who is investigating nanomaterials called “quantum dots.” Together, the team will be working on making and studying new types of quantum dots, which have been identified as candidates in next-generation solar cells, lasers, energy storage devices and quantum computers.

Van Patten has served as a mentor for Project SEED students since 2013. Although the American Chemical Society provides no monetary compensation for the researchers who work with SEED students, Van Patten said he believes the program is worth the extra effort.

“The practice of science is not a classroom endeavor, so I believe it’s critical to get interested students involved in the research laboratory as early as possible,” he said.

“This program allows students to get involved after a high-quality, one-year high school experience, and both of these students have that.”