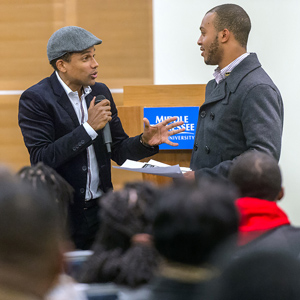 In a spirited presentation Wednesday night to a packed ballroom in MTSU’s Student Union, actor and author Hill Harper challenged attendees to map a course for their lives that speaks to their true passions and effects change in the world around them.

“We can build lives just like an architect builds a structure,” said Harper, best known for his roles in the television series “CSI: NY” and “Covert Affairs.” “And it starts with a blueprint or a plan. … Go home and write out a blueprint.”

Harper was keynote speaker for the event, a highlight of MTSU’s celebration of Black History Month. His appearance, which was free and open to the public, drew a standing room only crowd and featured a Q&A session at the end. A closed session with Harper for black males and a book signing were held just prior to the keynote address.

Floating around the ballroom and recruiting a few students to assist with illustrating some of his points, Harper mixed in references to physics, historical figures, famous quotes and personal anecdotes in a high-energy presentation aimed at driving home a message of personal and collective change.

“Dr. (Martin Luther) King said that we are all tied together in the single bond of a mutual destiny,” he said. “Which means to me that no matter how well I’m doing out in Hollywood, if there’s a brother or sister in Murfreesboro not doing well, then I’m not doing well. Because my destiny is inextricably linked to yours.”

Witty throughout, Harper said his visit to Murfreesboro wasn’t his first, having traveled here years ago with director Spike Lee and a cast and crew for filming a scene of Lee’s 1996 movie “Get on the Bus,” a story about a bus trip by a group of black men to the historic Million Man March in Washington, D.C.

Back then, he recalled, it felt like there weren’t that many people living here. “But I drove here today, and I experienced worse traffic than I did in Los Angeles!” he said, drawing laughter from the crowd. “Things have changed in Murfreesboro.”

During the Q&A portion, MTSU graduate student Darell Baptist asked Harper to talk about the keys to living a successful life and what motivated him to achieve his goals.

“At what point did you make the choice that you were going to be successful?” Baptist asked.

Harper said the mistake people often make is allowing others to define success for them. That can lead to overly cautious decisions that lead to unfulfilled lives, when people should instead be taking more risks, regardless of their age.

“Success is absolutely how you define it, so I knew I was going to be successful … no matter what,” he said. “We get into this world where we think success is about comparing … That’s not success. To me, success is living a life where I’m actually being true to myself, but also improving the condition of others around me.”

Harper is also the author of several New York Times bestsellers, including “Letters to a Young Brother,” “Letters to a Young Sister,” and “The Conversation: How Black Men and Women Can Build Loving, Trusting Relationships.” For both his writing and his acting, Harper has won seven NAACP Image Awards.

Harper is the founder of the Manifest Your Destiny Foundation, a nonprofit organization created “to provide underserved youth a path to empowerment and educational excellence through mentoring, academic enrichment programming, college access skills obtainment and the facilitation of psychosocial and physical development strategies,” according to www.mydf.org.

For six years, the foundation has sponsored the Summer Empowerment Academy, a free weeklong mentoring event for eighth-graders entering the ninth grade from economically disadvantaged neighborhoods in Los Angeles.

“We were thrilled to have Mr. Harper on campus,” said Jonell Hinsey, director of MTSU’s Intercultural and Diversity Center and chair of the Black History Month Committee. “His message really inspired our students to think seriously about their passions and how they can impact the world now and for years to come.”