DISCOVERIES: A brief look at i.. 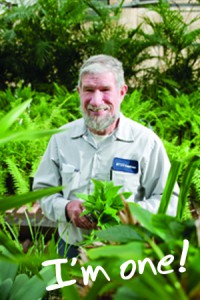 Until last spring, when budget cutbacks froze the program, Sizemore was the man who grew and supervised planting of more than 10,000 flowers that dot MTSU’s 500-acre campus each spring.  He still grows and furnishes that ornate greenery that decorates University events like Commencement.  He also keeps beds mulched, cares for shrubbery, and consults on University building projects to ensure the MTSU campus regains some of the tree species it has lost over the years.

During his time at and around MTSU, Sizemore has been a friend to campus presidents and rank-and-file workers alike.  He shows no interest in retiring anytime soon.

“I’m having too much fun,” he chuckles.

A 1971 alum and a biology major, Sizemore was initially hired as MTSU’s greenhouse supervisor, growing snapdragons and mums and anything else horticulture students needed to complete their studies.  He’s still doing it, boasting a collection of more than 100 exotic flowers and plants that he’s collected and maintained over the years (for example, a 35-year-old banana plant that remains in its original pot).

Sizemore has witnessed firsthand many of the changes at MTSU since his arrival. In the mid-1970s, the greenhouse area was “nothing but cornfields and cows,” he says.  Sizemore stands on the front porch of his office -a converted tool shed- and has a good view of the new College of Education and student union buildings under construction.  But of cows and cornfields? “Not anymore,” he says with a smile. MTSU