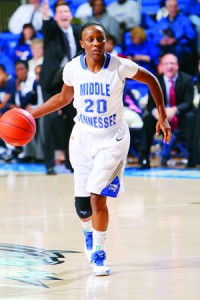 A native of Memphis, Tina Stewart came to MTSU after an outstanding career at Memphis Central High School.  At MTSU, she majored in exercise science.  It was said that she had a smile that would light up a room.  She proudly stated in the women’s basketball program’s media guide that the people who influenced her the most were her family.  Stewart is survived by her father and mother, Adrian and Ida Jackson, and her three siblings, Adrian, Monika and Miesha.