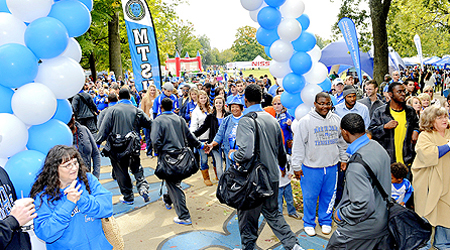 Fun, food, fellowship and football were at the forefront of the 2012 Homecoming for MTSU students, alumni and friends of the university.

Alumni, family and friends gather for the “Mixer on Middle” at the Alumni House on Middle Tennessee Boulevard with some of the Baby Raiders before the 2012 Homecoming Parade. (MTSU photo by J. Intintoli)

“Under the Blue Top” provided a circus-like theme and atmosphere for this year’s alumni and student festivities, which got under way Sept. 29 and culminated in the Blue Raiders’ Oct. 6 football game against Sun Belt Conference rival Louisiana-Monroe in Floyd Stadium.

“MTSU Homecoming is a time when family and friends come together to celebrate what the university means to them personally, as well as to our community,” said Rhonda King, an assistant director in alumni relations.

Alumni events included gathering of the Class of 1962 Golden Raiders and the Homecoming Tailgate Lunch on the day of the big game.

This year’s MTSU Homecoming Parade was led by alumna and grand marshal Pam Wright (’73). Chip Walters (’85), the “voice of the Blue Raiders,” and Regina Raccuglia (’05) were the parade announcers. Raccuglia serves as communications manager for the Tennessee Valley Blood Services Region of the American Red Cross and is a former WSMV Channel 4 news reporter.

The 2012-13 National Alumni Association’s Distinguished Alumni and Young Alumni honorees rode in the parade and were recognized at halftime. You can read more about them here.

Halftime also saw the crowning of the 2012 homecoming queen and king, senior Callie Durham of McMinnville, Tenn., and senior Brian Williams of Chattanooga,

A sampling of the day’s events are shown here. More photos, videos and updates are available at the university’s Facebook page.

Fans, friends and family greet the Blue Raiders along the Raider Walk in Walnut Grove Oct. 6 before the homecoming game against Louisiana-Monroe. (MTSU photo by J. Intintoli)