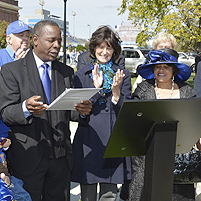 A group of dignitaries witnessed the placement of three markers around the area, designating it Harrison-Black Circle for Tom Harrison and Joe Black, the landowners who sold 20 acres to the Tennessee Board of Education for $5,000. They donated 80 additional acres.

“This was the setting 101 years ago when Middle Tennessee State Normal School, with 19 faculty members, opened its doors to 125 students,” MTSU President Sidney A. McPhee noted.

“It is unlikely that the Harrison and Black families, along with those forward-minded civic leaders, could have envisioned what stands on the site today — a major, comprehensive university that has earned national and international acclaim.”

Ultimately, Kirksey Old Main, Rutledge Hall, the Tom H. Jackson Building and a heating plant were built on the Harrison-Black property at a total cost of $137,855. With the President’s Residence, they became the first five buildings on the campus.