MTSU alumna shares tales of do.. 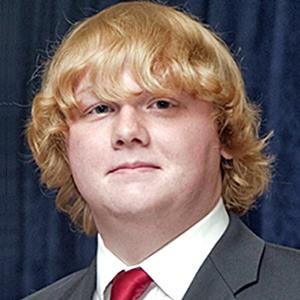 At first glance, there might not seem to be any common ground between physics and philosophy.

However, those very different disciplines are comfortable educational territory to Robert Daniel Murphy.

“Not necessarily all philosophers are scientists, but I would argue that any scientist, and particularly physicist, that is worth his or her salt would have to be a philosopher,” Murphy said.

The Murfreesboro resident, who graduated May 10 with bachelor’s degrees in both majors, is one of the winners of a $5,000 national fellowship from Phi Kappa Phi honor society.

Only 51 superior students from across the country were chosen for the stipend, which is presented annually by the nation’s oldest, largest and most selective collegiate honor society for all academic disciplines.

Murphy will put that $5,000 to use in the fall, when he begins his pursuit of a doctorate degree in physics at the University of Tennessee-Knoxville.

Rewards for academic excellence are nothing new to Murphy. He received MTSU’s highest award for an entering freshman, the Buchanan Fellowship, in 2010, and the national Barry M. Goldwater Scholarship in 2013.

“Daniel has outstanding academic skills and he has proven especially capable at applying classroom skills to real-world problems,” wrote Dr. William Robertson, a professor of physics at MTSU, in his recommendation letter.

Under Robertson’s tutelage, Murphy performed research at MTSU on a topic associated with an optical biosensor project.

Murphy said solving the issue after much more research hopefully could lead to a more sensitive fluorescence device for the medical profession.

“When I took my first physics class as a junior in high school, everything just clicked,” Murphy said.

Dr. Vic Montemayor, another MTSU physics professor, commended Murphy for his two years as president of the university’s Society of Physics Students chapter.

“He has the demeanor and confidence of a natural leader,” Montemayor wrote. “He also has what I think is a crucial characteristic of a successful leader: he puts the needs of others ahead of his own needs or desires.”

Murphy said it was not unusual for him to stay up until 2 or 3 a.m. with fellow physics students trying to decode how the universe behaves.

That keen intellect, however, is not limited to the lab. Dr. Ron Bombardi, chair of the MTSU Department of Philosophy, hails Murphy’s detailed dissections of the ideas that have boggled great thinkers for centuries.

“His analytical skills are formidable, comprehensive and well-developed; his intuitive faculties are equally impressive,” wrote Bombardi. “Rarely in the span of some 30 years of teaching at the undergraduate level have I encountered a student so profoundly committed to intellectual rigor.”

Murphy, whose father works at Bridgestone Firestone’s La Vergne, Tennessee, plant and whose mother works at the Tennessee Rehabilitation Center in Smyrna, Tennessee, expressed gratitude to his family and to Laura Clippard, undergraduate fellowships coordinator for the University Honors College, for supporting him in his education.

When considering Phi Kappa Phi’s motto, “Let the love of learning rule humanity,” Murphy said, “It’s not about power or money. It’s about helping others.”