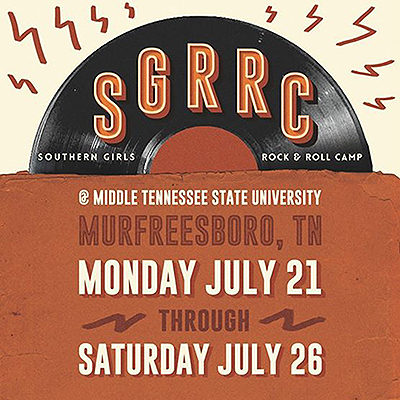 The summer fun is only beginning for girls who know how to rock and roll.

Girls practice their guitar licks as a bandmate looks on at the 2013 Southern Girls Rock & Roll Camp at MTSU. (MTSU file photos by News and Media Relations)

Girls ages 10-17 will be attending the 12th annual Southern Girls Rock & Roll Camp, which is slated July 21-26 on the MTSU campus.

Most of the day camp’s activities will take place in the Wright Music Building on campus with musical performances inside Wright’s Hinton Hall.

To find parking and buildings on campus, attendees can use the printable map at http://tinyurl.com/MTSUParkingMap13-14.

“Basically, the mission of the camp to get diverse groups of girls to work together, value collaboration over competition, create media that represent them, to learn how to play an instrument and then use that knowledge to write a song to express themselves along with other girls their own age,” said Sarah Bandy, administrative director of the camp’s parent organization, Youth Empowerment through Arts & Humanities.

Full and partial scholarships are available to help cover the fee of $310, which includes instruments and supplies. For more information, to register or to apply for scholarships, go to www.sgrrc.com.

You can watch a video from the 2013 camp below.

In addition, workshops on recording, screen printing, photography, image and identity, and music herstory are available. Campers who attend this year’s recording workshop will learn how to build contact microphones and use them to turn everyday objects into instruments.

Click on the poster for a link to more info on Southern Girls Rock & Roll Camp 2014 at MTSU.

Featured artists for the camp’s daily noon concerts and question-and-answer sessions in Hinton Hall will be Hear, Hear on Monday, The Graces on Tuesday, Pretty Little Demons on Wednesday, Idle Bloom on Thursday and Jasmin Kaset on Friday.

All of these midday performances are also open to the public. A $5 donation is requested.

The campers will have an opportunity to put their newly acquired knowledge to the test when they perform in groups at the showcase concert at 2 p.m. Saturday, July 26, at Central Magnet School, located at 701 E. Main St. in Murfreesboro.

Prizes to be raffled off to audience members at the showcase are donated by Goodbuy Girls, Loveless Café, the Chattanooga Zoo, the Chattanooga Lookouts, Disneyworld, Demos’ Restaurant, Five Senses, Jeni’s Splendid Ice Cream and Mayday Brewery.

Two members of a band rehearse at the 2013 Southern Girls Rock & Roll Camp at MTSU.

A camper receives instruction in mixing audio on a computer during the 2013 Southern Girls Rock & Roll Camp at MTSU.