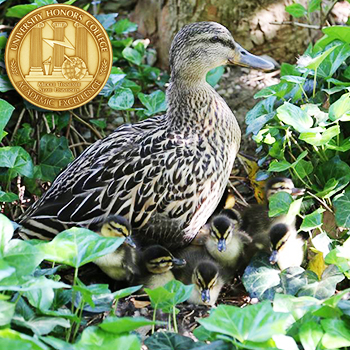 A monthlong wait was rewarded May 4 when a mallard duck dubbed “Ivy,” who chose to nest in the ivy at the base of the columns at MTSU’s Paul W. Martin Sr. Honors Building, hatched 12 of her 13 eggs.

After finding Ivy and learning that her eggs were protected by the Migratory Bird Treaty Act of 1918, University Honors College officials summoned MTSU Police to rope off the area with yellow tape. Suitable warning signs also were posted to keep well-wishing bystanders, some of who had thought the mallard was in distress, at a safe distance.

Ivy, a female mallard duck, sits with her ducklings May 4 outside the Paul W. Martin Sr. Honors Building. (MTSU photo by Marsha Powers)

The ducklings’ arrival corresponded with MTSU final exams for spring 2015, which meant a reduced flow of students into the building on the east side of campus.

The tiny newcomers also received an unexpected welcome when the bells in the building’s bell tower pealed twice — to recognize students who had successfully defended their theses, an Honors College tradition.

By afternoon, Ivy was leading her new brood across lawns and parking lots to a nearby pond, where they could meet their father and where fans hope they’ll stay and grow into adulthood.

Ivy’s welcome celebration also got a jump on MTSU’s commencement ceremonies, which are scheduled Saturday, May 9, at 9 a.m. and 2 p.m. in Murphy Center. More details of that highly anticipated event are available at www.mtsunews.com/spring-commencement-2015.

The hatching also corresponded with the announcement of the brood’s names. Honors College student Kyeesha Wilcox, a freshman global studies major from Smyrna, Tennessee, earned the honor — and a $50 award — for suggesting names for the ducklings that relate to the eight virtues engraved on the north side of the Honors Building.

Those virtues, which are part of the Honors College creed, are character, creativity, commitment, curiosity, discipline, faith, honor and integrity.

The ducklings’ names and their associated virtues include:

The second-place suggestions came from Colby Denton, who proposed naming the ducklings Mallory, for mallard duck; Dabble, for the mallard’s practice of “dabbling,” or feeding at water’s surface instead of diving; Muscy, for the Muscovy duck breed native to Mexico and Latin America; Mergie, for the merganser duck native to Europe and North America; Woody, for the common wood duck; Drake, a male duck; Waddles, Quackers, Trumpet and Peck; Preena, for preening feathers; and Loona, for the North American water bird with the distinctive call. Denton, who is from Georgetown, Tennessee, is a junior advertising/public relations major in the College of Mass Communication.

The Honors College Facebook page features some brief videos of Ivy and the ducklings. For those interested, a group of ducklings is known as a “safe” when on land and a “raft” when on water.