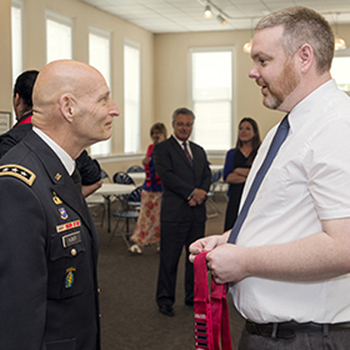 MTSU ROTC cadet Tierra Kendrick performed a beautiful rendition of the national anthem to help the first Graduating Veterans Stole Ceremony get underway May 5 in Cantrell Hall of the Tom H. Jackson Building.

Then, seated with fellow veterans, Kendrick, 22, was among 40 of 125 total student veterans being recognized by the university in the special ceremony five days before graduation Saturday, May 9, in Murphy Center.

The veterans received the red stole regalia after entering and registering, and proudly wore the scarf-like garments during Tuesday’s ceremony. They can wear them with their cap and gown at graduation.

Presided over by retired U.S. Army Lt. Gen. Keith M. Huber, MTSU’s senior adviser for veterans and leadership initiatives, the stole ceremony “demonstrates a clear commitment to recognize and appreciate the selfless service and sacrifice of our veterans and their precious families,” he said.

A U.S. Army reservist for three years and recording industry major in the College of Mass Communication, Kendrick said she was “honored to be a part of the first veterans stole ceremony. The fact I’m graduating, it made it all real.”

Supported and encouraged by her mother and three younger sisters in a single-parent home, Kendrick missed one semester at MTSU because she was in reservist training. To catch up, she averaged 17 to 18 hours each fall and spring semester and 13 during the summer sessions.

Kendrick will be commissioned as a second lieutenant at 10 a.m. Friday, May 8, in the Veterans Memorial outside the Jackson building. After graduation, she will be put on active duty in the military intelligence branch.

Arthur Grasso, who served in the U.S. Air Force from 2001 to 2014, said the event was a “great opportunity to meet and see other veterans” and to have a “professional photograph that I can hang up some day in my office” alongside the commemorative coin Huber presented as a gift to all veterans attending the ceremony.

Grasso, who lives in Murfreesboro, will graduate with a degree in liberal studies focusing on engineering technology corporate leadership.

MTSU President Sidney A. McPhee became emotional after Huber introduced him. It evoked memories of the passing of McPhee’s father Sept. 10, 2001, one day before the terrorist attacks on U.S. soil.

“Saturday, I will have the honor of shaking your hand,” McPhee said. “We can go to sleep at night knowing we have great men and women like you protecting us.”

The president expressed confidence that the stole ceremony “will be a cherished tradition for the university and for the families. We want to recognize your academic and personal accomplishments, and offer our gratitude for your service.”

McPhee praised the efforts of MTSU faculty members Hilary Miller, Tony Johnston, Pat Richey and Derek Frisby, among others, for their leadership in raising veterans’ awareness with the administration.

The president said new veterans’ initiatives will be announced in the coming months “to take our program to the next level.”

Provost Brad Bartel told the veterans “how really proud of all of you I am. You are welcome back any time. We are 1,000 strong, and we do sense the numbers will grow — and grow in quality.”