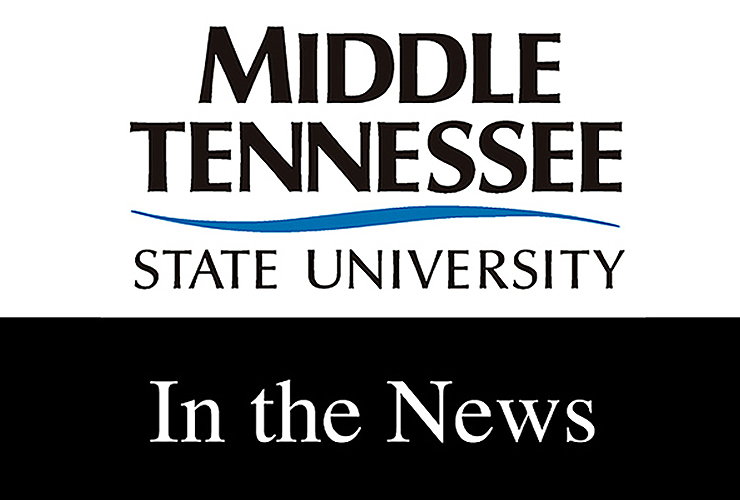 • Dr. Carter Smith, a senior instructor of criminal justice administration, took part in a panel discussion on white supremacy in the U.S. military that aired Sept. 3 on KPBS Radio in San Diego, California. The video can be accessed here.

• Dr. Ben Stickle, an associate professor of criminal justice administration, said research early in the pandemic period did not indicate an increase in domestic violence cases in a Sept. 4 story in the Murfreesboro (Tennessee) Post. His views can be read here.

• Dr. Ron Aday, a professor of sociology, addressed the issue of aging prison inmates and the challenges they face when they are released in a Sept. 7 article in The Economist. His comments are available here.

• Dr. Samuel Haruna, an assistant professor of agriculture, explained how cover crops that are planted between commercial crops can help farmers preserve the quality of their soil in a Sept. 8 article at www.portalmacauba.com. His remarks can be read here.

• Dr. Sean Foley, a professor of history, hailed the acquisition of rare books by the King Abdul Aziz Public Library in Riyadh, Saudi Arabia, as a boon to scholars in a Sept. 10 article at www.timesofnews.com. His views can be accessed here.

• Dr. Mary Evins, a history professor and coordinator of the American Democracy Project at MTSU, addressed the issue of election security in a Sept. 10 story in The Tennessean. Her perspectives are available here.

Evins also talked about an election security workshop involving officials across the state in a Sept. 10 report on WATN-TV in Memphis, Tennessee. Her comments can be read here.

• Kent Syler, a professor of political science and international relations, expressed concern that there will be more politically motivated violence between now and the November election in a Sept. 11 report on WSMV-TV in Nashville, Tennessee. His views are available here.

• Dr. Charles Baum, a professor of economics and finance, wrote and voiced an editorial on MTSU’s rural health care partnership with Meharry Medical College that aired Sept. 14 on WGNS Radio in Murfreesboro, Tennessee, and was published Sept. 15 by the Murfreesboro (Tennessee) Voice. The text can be read here.

• Dr. John Vile, dean of the University Honors College and political scientist, analyzed the race for president Sept. 15 on “Inside Politics” on NewsChannel5+ in Nashville, Tennessee. The video can be viewed in three parts here.

• Dr. Sekou Franklin, an associate professor of political science and international relations, lectured on the 1965 Voting Rights Act in a video for www.rethinkingchurchstrategies.com. The video, which was posted on YouTube on Sept. 15, can be viewed here.

• Beverly Keel, dean of the College of Media and Entertainment, talked about empowering women in the music industry on “Tennessee Voices,” a videocast from The Tennessean. The video, which was posted Sept. 16, can be accessed here.

• Dr. Emily Baran, chair of the Department of History, participated in a virtual hearing by the U.S. Commission on International Religious Freedom on efforts to curtail religious freedom in the Russian Federation and Central Asia Sept. 16. The video is available here.

• Ken Paulson, director of the Free Speech Center, discussed the 1 for All campaign to promote the First Amendment on “Tennessee Voices,” a videocast from The Tennessean. The video, which was posted Sept. 17, can be viewed here.

• Dr. Richard Chapman, director of MTSU Health Services, explained the university’s efforts to keep students safe during the COVID-19 pandemic and quarantine people who test positive in a Sept. 17 report on WSMV-TV in Nashville. The video can be seen here.