As dean of the MTSU Jones College of Business, Dr. David Urban is the highest-ranking veteran on the academic side of the university.

Urban served in the U.S. Navy and has spent 35 years in academia. The last six have been at MTSU, overseeing explosive growth in his college.

Because of his military connection, Urban was asked to deliver remarks at the inaugural MTSU Faculty/Staff Veterans Stole Ceremony Friday, Nov. 15, in the Miller Education Center’s second-floor atrium.

The ceremony is a way for the university to recognize all of those who have served in the various branches of military. Keith M. Huber, senior adviser for veterans and leadership initiatives and a retired U.S. Army lieutenant general, presented each honoree with the red stoles and special commemorative coins also shared each semester with graduating student veterans. 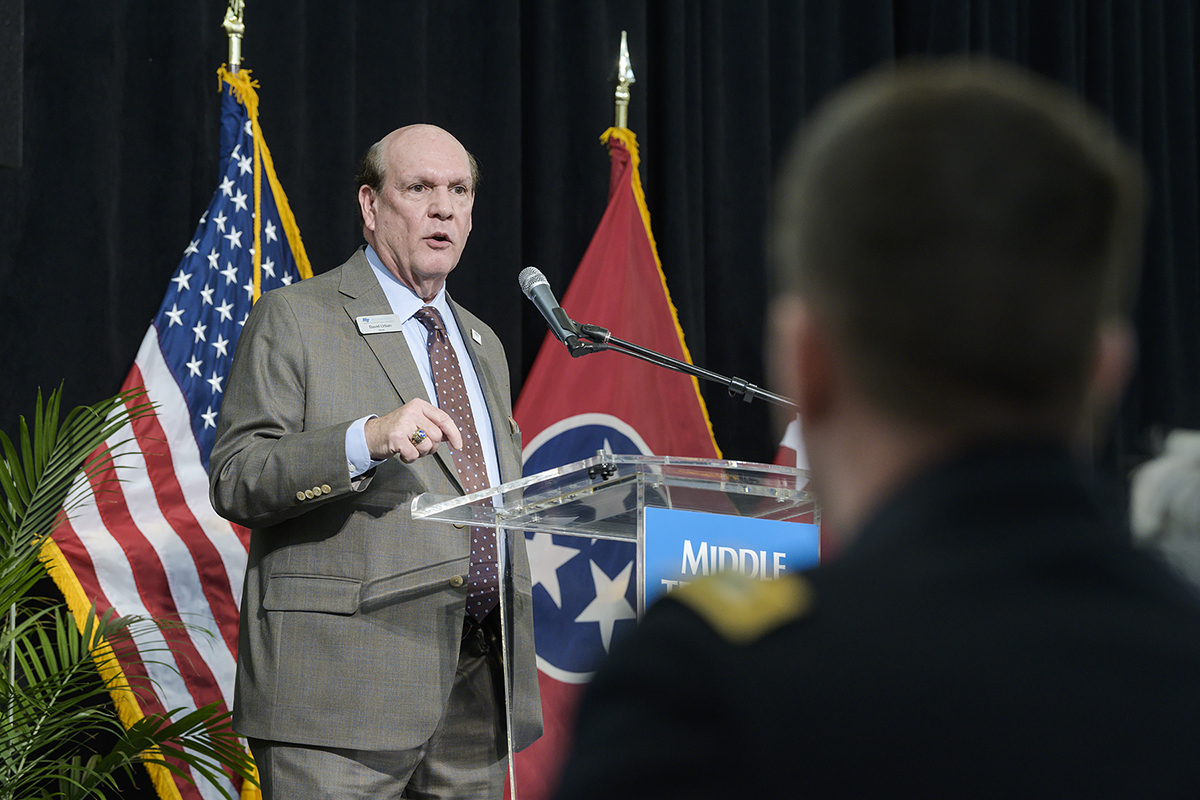 David Urban, dean of the Jones College of Business and a U.S. Navy veteran, spoke about mission, teamwork and more in comparisons between the military and academics Friday, Nov. 15, during the inaugural MTSU Faculty/Staff Veterans Stole Ceremony at the Miller Education Center on Bell Street. (MTSU photo by Andy Heidt)

Nearly 30 veterans were honored in the formal ceremony, a prelude to the 38th annual MTSU Salute to Veterans and Armed Forces, which takes place Saturday, Nov. 16, on campus. The faculty/staff event will precede the annual “Salute” game activities in the future.

“There is a difference in the clarity of the mission,” Urban said, comparing academics and the military. “In the military, my job was to defend the constitution of the United States, protecting us from all enemies foreign and domestic.

“Our mission in academics should be to provide our students with an outstanding education that is transformational and unforgettable.”

The dean, who also was an honoree, said teamwork is critical in each environment.

“There’s a greater reliance on organizationwide teamwork,” he said. “Every sailor and Marine had a role. At every university, teamwork takes place, but not on as broad of a scale as in the military. Wouldn’t it be great for all of us to pull together for a common agenda as they do in the armed forces?” 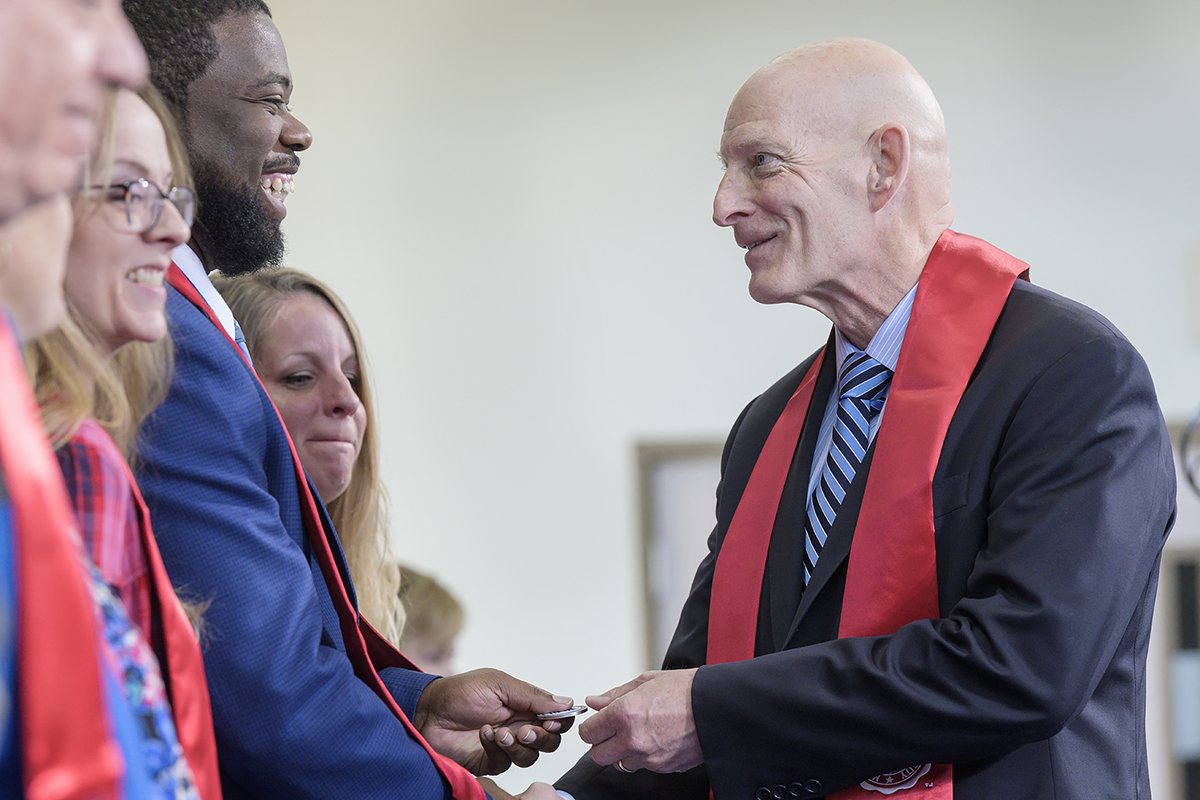 “Many universities are not set up to be flexible and responsive,” he said. “MTSU fares better than most universities in this regard.”

He also discussed the “deep-seated feeling or warmth” he’s felt — once when meeting the late U.S. Navy Adm. James Stockdale, who had received a Congressional Medal of Honor, and another when arriving by ship in New York and seeing the Statue of Liberty and Manhattan skyline featuring the Twin Towers.

“Since we’ve started the veterans center and have the (student) stole ceremonies, the 9/11 Remembrance and what we do at the (Salute to Veterans and Armed Forces) football game, we need more of that in academics … to celebrate in a solemn and dignified way what we do and how well we do it.”

MTSU alumnus Chris Rochelle, an enrollment coordinator at the MT One Stop who also serves as a liaison between his office and the veterans center, served in the U.S. Army from 2002 to 2011, including one tour in Operation Iraqi Freedom II.

“Tt makes me happy they are doing this for us,” said Rochelle, adding that he is “proud to be a part of a celebration of this nature when the university acknowledges its veterans.”

Rochelle and his wife, Danielle Rochelle, are the parents of Bailee, 2, and Aiden, 1.

“One of the reasons I came here was because of the veterans center,” Dr. Anne Anderson, professor and Weatherford Chair of Finance in the Jones College of Business, told the audience. 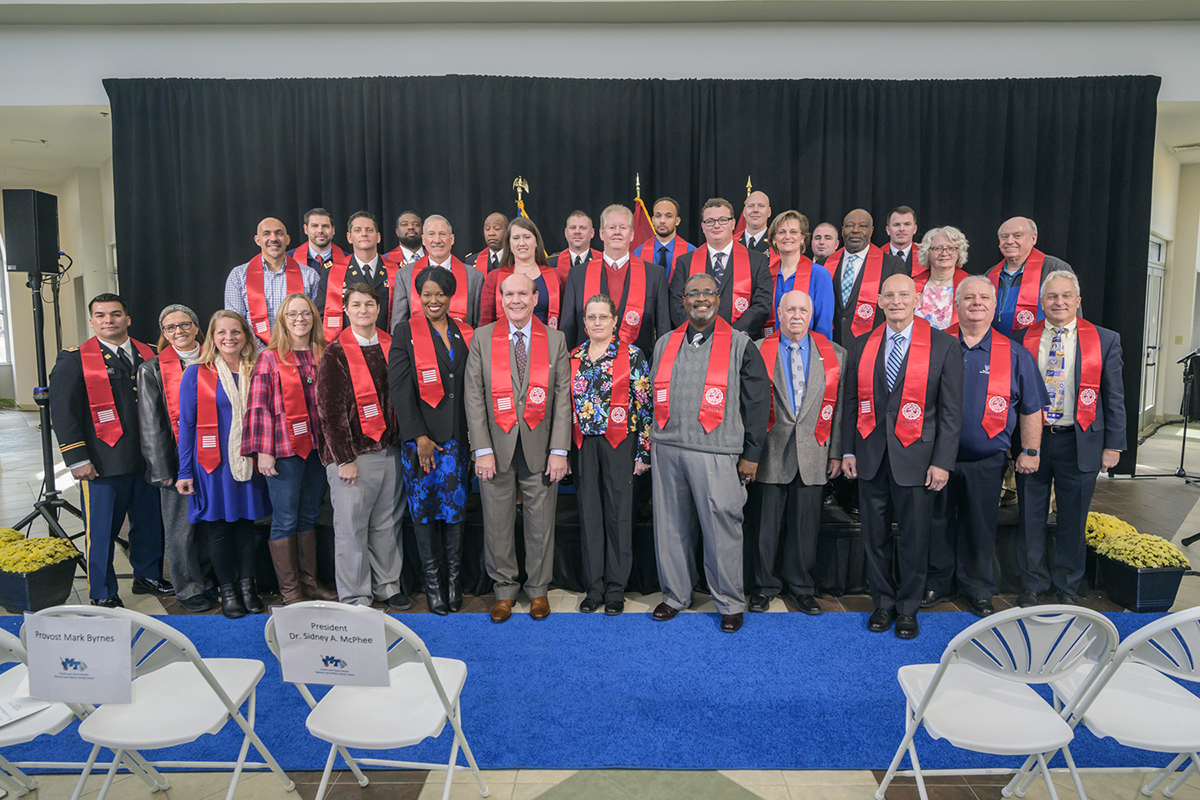 In speaking to her MTSU colleagues, Anderson appealed to them “to reach out to your student veterans, talk to them about the challenges they face and that they are not alone. They have a unique opportunity here.”

The Weatherford Chair of Finance, established in 1986, honors Jack Weatherford, one of Tennessee’s most distinguished bankers. Now 95, he is a decorated World War II Navy veteran.

Huber welcomed the audience, calling the event “another new tradition” for the Daniels Center, and thanked them for attending.

“We have a 9/11 Remembrance ceremony, Student Veterans Stole Ceremony and now a Faculty/Staff Stole Ceremony,” Huber said. “You proudly demonstrate you were a servant leader in uniform and how you are an influencer in the academic environment.”

The public and campus community also are invited to attend the fall 2019 Graduating Veterans Stole Ceremony at 10 a.m. Wednesday, Dec. 4, in the Miller Education Center second-floor atrium at 503 Bell St. 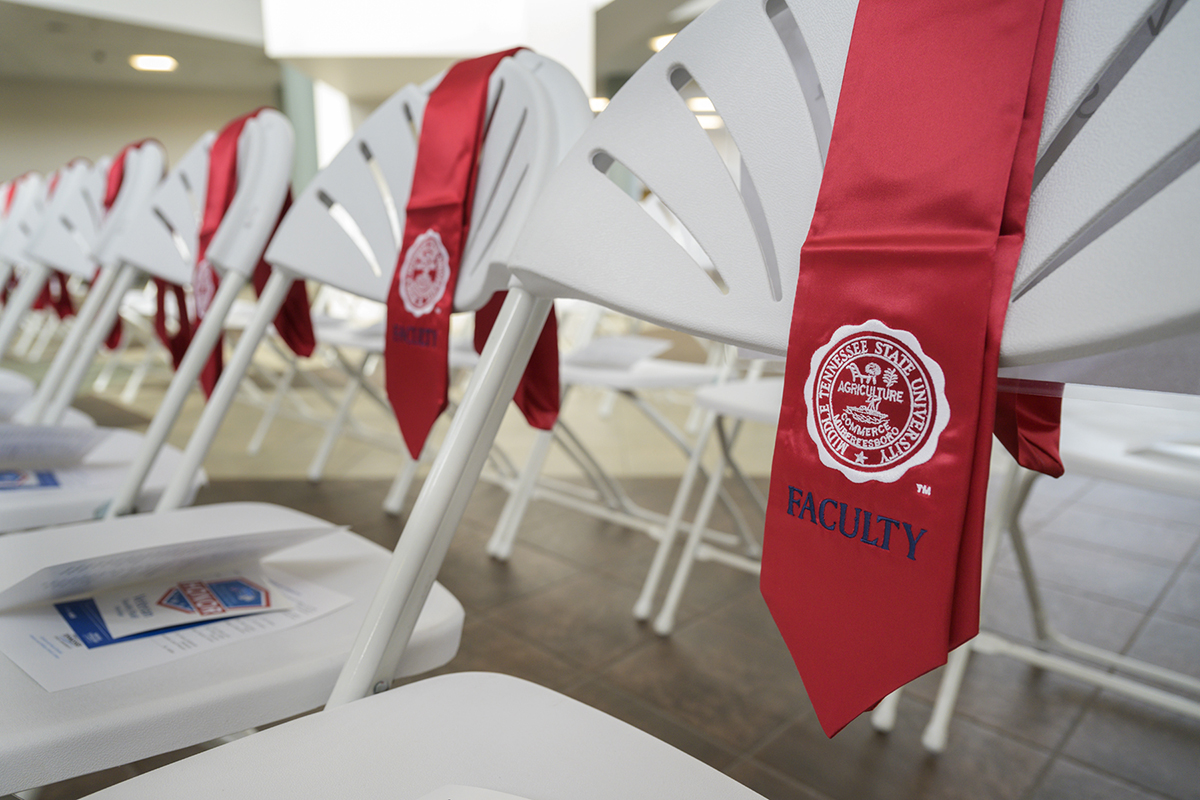 Red stoles for MTSU faculty and staff to wear during the inaugural MTSU Faculty/Staff Stole Ceremony await the honorees on Friday, Nov. 15, at the Miller Education Center on Bell Street. (MTSU photo by Andy Heidt)