Tickets on sale for Rodney Atk..

A young Midstate inventor who got his first taste of real acclaim at MTSU’s annual Invention Convention is getting more national attention after a professional-caliber turn on the TV show “Shark Tank.”

Maddox Prichard of Gallatin, Tennessee, was a fourth-grader when he brought his “Measuring Shovel,” a common-sense tool marked with depth measurements to make gardening more precise, to the 2016 Invention Convention at MTSU.

He brought home his division’s trophy in the MTSU event’s “Make Life Easier” category, competing against nearly 500 fourth-, fifth- and sixth-graders from 50-plus Middle Tennessee schools.

He then headed to the inaugural national convention in Washington, D.C., where he earned the Stanley Black and Decker Award for Household Organization and Tools.

Now an eighth-grade student at Gallatin’s Station Camp Middle School, Prichard and his family presented his Measuring Shovel for the judges’ study and potential investment on the ABC reality show’s Nov. 3 episode.

They were, to put it lightly, stunned, calling Prichard’s tool “brilliant.”

His negotiating skills showed teeth, too. 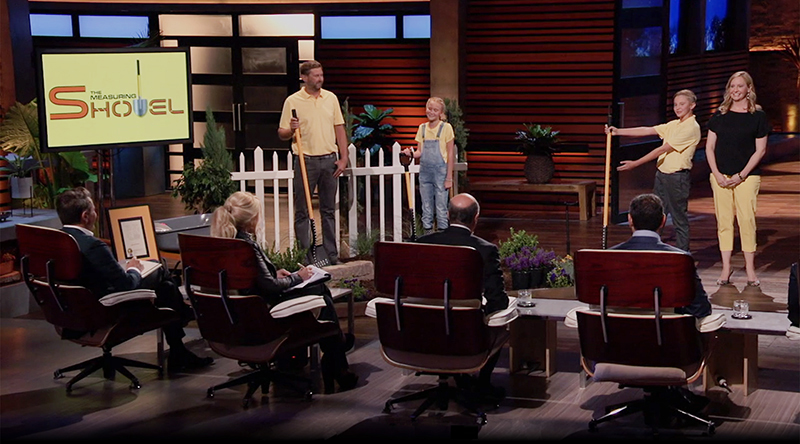 MTSU Invention Convention participant Maddox Prichard, second from right, now an eighth-grade student at Station Camp Middle School in Gallatin, Tennessee, presents his patented “Measuring Shovel,” a common-sense tool marked with depth measurements to make gardening more precise, to the “investors” on the ABC entrepreneurship reality show “Shark Tank” in an episode that aired in early November. Helping him, from left, are his dad, Jason; his sister, Brenna; and his mom, Amanda. (Photo courtesy of ABC/Disney)

The young inventor explained how measuring distance and depth helps ensure healthier plants and how the connections he made at MTSU got him a patent attorney and an official registration at the United States Patent and Trademark Office, finalized this past May.

He told the “sharks” that he wanted $40,000 for 15 percent equity in his company, displaying the tool in a mini-“garden” setting with the help of his parents, Amanda and Jason, and sister, Brenna.

And from the “There’s always one more MTSU connection” file, both the elder Prichards are MTSU alumni, too.

Maddox Prichard concluded his investment pitch with, “Why would you buy a regular shovel when the Measuring Shovel is sitting right beside it? That’s right, you wouldn’t!” 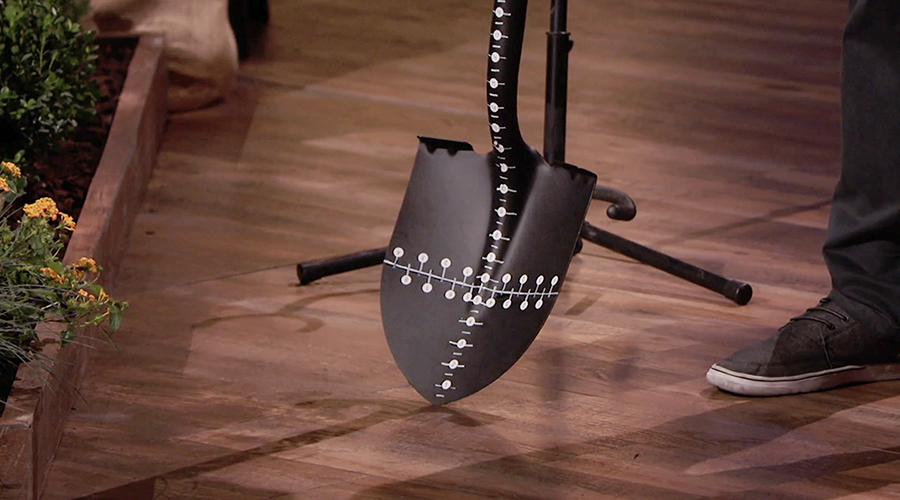 After listening closely to Prichard’s proposal, the investors spoke up.

“We’re gonna partner together, and we’re gonna blow this thing up,” said potential investor Kevin O’Leary, nodding to fellow judge Lori Grenier and offering Prichard $40,000 to license 30 percent of his company. “We don’t do this for free; you’re in the shark tank now, and we’re sharks.”

Investor Daniel Lubetzky, who praised Prichard’s idea as “exactly how I started,” offered the same financial backing in exchange for 25 percent of the company.

“We would build this, I know a lot of the big guys from the big boxes,” Lubetzky said excitedly. “I’m adopting you! … We’ll figure it out together.”

Prichard weighed their offers. Then he turned to O’Leary and Grenier.

You can learn the outcome in an excerpt from the show, available above. 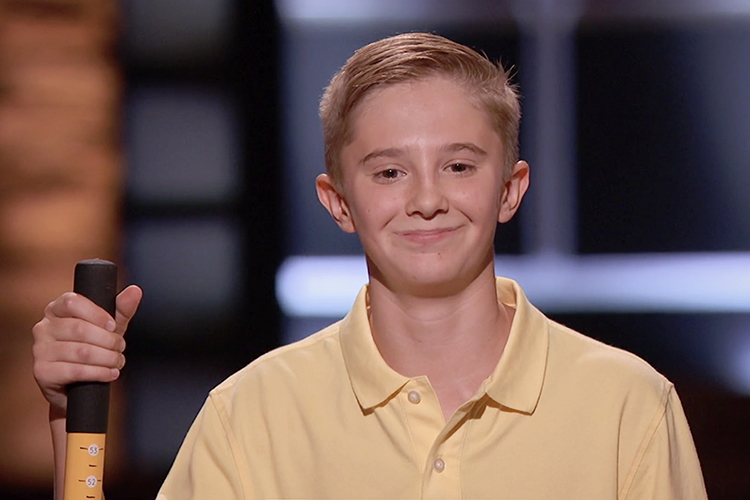 The show was recorded early last summer. The young family lost its patriarch a few weeks later after a brief bout with cancer.

Each year at MTSU’s Invention Convention, the young inventors use a maximum of $25 to create and present inventions from one of two categories —”Games” and “Make Our Lives Easier” — and compete for trophies, ribbons and even cash awards. Local winners keep making their mark on the National Invention Conventions, too; along with Prichard’s acclaim, Tennessee students have brought home the Henry Ford Student Innovators of the Year and Industry Innovation awards.

“It is such an honor to know the MTSU Invention Convention was the beginning of this very special journey for Maddox and his family!” said convention founder-director Tracey Huddleston, a professor in MTSU’s Department of Elementary and Special Education. “We are so happy and proud for him his family.”

Each year, Huddleston kicks off the event by telling the young inventors: “Everything starts with an idea. Each of you came here with an idea to make something new that never existed before. You are amazing.”

MTSU’s 2020 Invention Convention, marking its 28th year, is planned for Thursday, Feb. 27. The 2020 national event is set June 3-5 at the Henry Ford Museum of American Innovation in Dearborn, Michigan.

You can learn more about MTSU’s event, which is sponsored by State Farm Insurance and MTSU’s College of Education and supported by the Clouse-Elrod Foundation, at www.facebook.com/MTSUInventionConvention. The national convention website is http://inventionconvention.org.