Ex-Marine takes aim as MTSU re.. 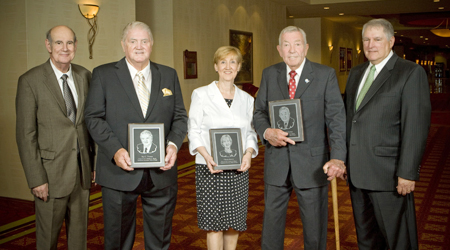 Three insurance professionals have been recognized for their stellar insurance careers with induction into the Robert E. Musto Tennessee Insurance Hall of Fame at MTSU.

The 2012 induction ceremony for George Gardner, Christie Reeves and Ray Thomas was held Aug. 2 at the Embassy Suites Hotel and Conference Center on Medical Center Parkway.

Gardner spent his entire 36-year insurance career with State Farm. The MTSU graduate and Indianapolis native at one point served as president of the Middle Tennessee Chapter of the National Association of Life Underwriters.

Now a Murfreesboro resident, Gardner conceived the Tommy T. Martin Chair of Insurance at MTSU, organizing and chairing the campaign to generate funds for the newly created chair in the late 1970s and early 1980s.

He was responsible for raising $200,000 of the original endowment, which now has risen to more than $1.4 million. To date, the Martin Chair is the only one of its kind in the state, and one of only a handful in the entire country.

Reeves is senior vice president and operations manager with the Arthur J. Gallagher Risk Management Services in Brentwood. The Nashville resident has spent 39 years in the insurance industry — 14 on the carrier side and 25 years with an agency.

Reeves also has served in various roles at insurance professional organizations, including the Insurors of Tennessee, where she served as director from 1999 to 2001, as board secretary from 2001 to 2008 and as Insuror Services LLC Board Director from 2006 to 2011. She is a past officer of the Down Syndrome of Middle Tennessee Chapter and a current member of the Insurance Liaison Committee of the Martin Chair of Insurance at MTSU.

Thomas transitioned to the insurance industry after more than a decade of coaching football at the high-school and college levels. The Rhea County native began his insurance career as a “trainee agent” with State Farm in Knoxville in 1973, where he was promoted to manager after three years.

He was active in professional organizations throughout his career, including serving as executive director of the National Association of Insurance and Financial Advisers Tennessee from 2004 to 2006.

The Robert E. Musto Tennessee Insurance Hall of Fame was created on the MTSU campus in 1999. It honors entrepreneurs who created insurance companies and agents and company employees who made a difference in their companies and their communities, significantly affected the lives of many people and advanced the role of insurance in society.

The Hall of Fame honors the late Robert E. Musto, longtime vice president of the National Life and Accident Insurance Company. It is located on the west wall of the first-floor south lobby of the Business and Aerospace Building at MTSU.

Forty-eight people have been inducted into the hall since its inception, according to Dr. Kenneth Hollman, holder of the Martin Chair of Insurance at MTSU.