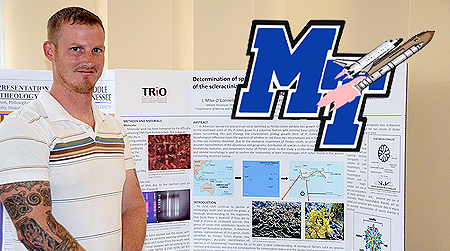 Life has taken a 180-degree turn for MTSU senior Mike O’Connell since he graduated from Wilson Central High School in 2003 and joined the U.S. Marine Corps. In fact, life has taken numerous turns and detours.

MTSU senior Mike O’Connell of Murfreesboro, a former U.S. Marine Corps infantryman, stands with his research poster on a species of coral reef off the coast of American Samoa. (Photo by MTSU News and Media Relations)

O’Connell, who expects to graduate with honors in spring 2013, was one of 23 presenters during the 13th annual McNair Program Research Symposium Aug. 1-2.

The McNair program is named for the late NASA astronaut Ronald E. McNair, who died in the 1986 space shuttle Challenger disaster.

Student research and presentations on a range of disciplines — including mathematics, social work, anthropology, English, dance performance, psychology and philosophy — was on display at the annual symposium.

O’Connell, a Murfreesboro resident, said he is in a collaborative effort with two others “trying to determine species boundaries in a predominant reef-building coral from the Pacific Ocean.”

O’Connell said two populations of the coral that display different growth forms both have been described as Porites lichen in American Samoa.

“Our goal is to determine if this is an accurate description or if the two morphologies are separate species,” O’Connell said of his research.

It is being conducted with Dr. Sarah Bergemann of the MTSU Biology Department and Dr. Doug Fenner of the American Samoa government’s Department of Marine and Wildlife Resources.

After high school, O’Connell enlisted in the Marine Corps and served as an infantryman for six years. He said his time in service included combat deployments to Iraq and Afghanistan.

O’Connell, who received three Certificates of Commendation, was medically discharged from the Marine Corps because of injuries sustained in Afghanistan. He began college at MTSU in fall 2009 and began working in Bergemann’s lab in May 2011.

“Since then, I have worked on various projects for Dr. Bergemann aimed at characterizing the genetic diversity of various fungi from around the world,” he said.

Graduate school looms on the horizon for O’Connell.

“I hope to expand upon this project in graduate school by characterizing genetic diversity of Porites lichen throughout the Pacific and look for patterns of connectivity among populations,” he said.

McNair Director Dr. Diane Miller said she continues to be amazed at the McNair students’ research work and the role faculty mentors play in the process.

“Each McNair Scholar and mentor makes a personal commitment of time and effort to create a program environment of academic excellence and achievement,” Miller said.

“The mentor relationship that each scholar experiences helps promote in our McNair scholars a dedication to the process and promise of higher education — their own, as students, and the education of others, as future professors and researchers.”