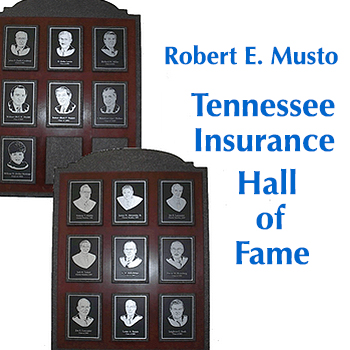 MTSU has honored four insurance professionals for their stellar careers by inducting them into the university’s Robert E. Musto Tennessee Insurance Hall of Fame.

Bidek moved to Tennessee in 1975 as an assistant professor at the then-University of Tennessee-Nashville and developed a relationship with the Insurors of Tennessee. As assistant executive director of the association, Bidek expanded the organization’s education offerings. He later became heavily involved in the group’s government affairs efforts, representing it through 17 legislative sessions and the terms of six governors and 10 state insurance commissioners.

A Memphis native, Brown is a licensed representative of Ameritas Life, Union Central Life and Acacia Life and was praised at his induction as an adviser “who believes deeply in the products he sells, and speaks of their virtues at every opportunity.” He has represented Union Central since 1972 and has served as a general agent since 1987.

Brown was praised during the induction ceremony for his participation in many professional organizations and championing the causes and interests of agents throughout his career. He is a member of the National Association of Insurance and Financial Advisors, where he served as local, state and national president during his insurance career. He also served on the board of directors of the Life Insurance Foundation for Education from 2006 to 2008.

Cochran, a Nashville native, was commended during the induction ceremony for his work with Northwestern Mutual, where he is known as one of the “founding fathers” of the company’s LEAD management development program. Cochran retired from the company in 2002 after a career that spanned more than 54 years.

Thoma, who died in 2004, was a partner in the E.B. Thoma & Son Insurance Agency in Tullahoma, Tenn. In 1946, after returning home from service in World War II, he became a partner with his father in the family business, which was established 1910. The younger Thoma expanded the agency to include real estate and loans in the early 1960s.

Thoma also had a long affiliation with Insurors of Tennessee, serving on its board of directors and becoming its president in 1983. In 1987, he was recognized as state Insuror of the Year.

Thoma’s son, Busch, accepted the Hall of Fame plaque on his behalf.

The Robert E. Musto Tennessee Insurance Hall of Fame, created on the MTSU campus in 1999, honors entrepreneurs who created insurance companies and the agents and company employees who made a difference in their companies and their communities, significantly affected the lives of many people and advanced the role of insurance in society.

The Hall of Fame honors the late Robert E. Musto, longtime vice president of the National Life and Accident Insurance Company. The Robert E. Musto Insurance Hall of Fame, which is under the auspices of the Tommy T. Martin Chair of Insurance in MTSU’s Jennings A. Jones College of Business, is located on the west wall of the first-floor south lobby of the Business and Aerospace Building at MTSU.

Fifty-five people have been inducted into the hall since its inception, according to Dr. Kenneth Hollman, holder of the Martin Chair of Insurance at MTSU.