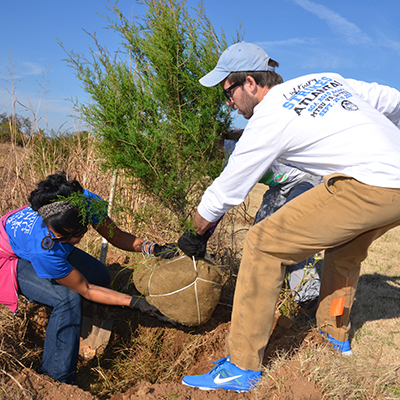 The MTSU Stormwater Annual Report Public Meeting will be held from 6 to 7:30 p.m. Tuesday, Sept. 17, at the Patterson Park Community Center, Meeting Room A. The meeting will highlight the annual report and outcomes of the program.

“We want the outreach to be effective,” said Shelia Knight, an environmental engineer with MTSU Environmental Health and Safety Services. “The whole idea is to reduce the pollutants in our streams.”

MTSU and the city jointly operate a National Pollutant Discharge Elimination System, or NPDES, MS4 Permit. The Tennessee Department of Environment and Conservation requires the permit as mandated by the Environmental Protection Agency under the Clean Water Act of 1972.

Student volunteers help plant trees along Garrison Creek in east Murfreesboro in November 2012. They were among about 40 students volunteering for the tree planting event hosted by the MTSU Stormwater Program in partnership with the Tennessee Environmental Council and the city of Murfreesboro. (File photo by MTSU News and Media Relations)

Both the TDEC and the permit process require MTSU and the city to hold a public meeting to encourage public participation and community involvement with the programs.

The primary goal of this permit is improving surface-water quality by reducing pollutants in the runoff water. Outreach efforts have included coordination of volunteer tree-planting and litter-pick-up events in the community and on campus.

“You can’t do it without the public,” said Cynthia Allen, a Stormwater Program coordinator. “That’s the requirement of the permit. You have to have public education and public participation.”

Polluted stormwater runoff is commonly transported through Municipal Separate Storm Sewer Systems, also called MS4s, where it is often discharged untreated into local bodies of water. To prevent harmful pollutants from being washed or dumped into such a system, operators must obtain a NPDES permit and develop a stormwater management program.

Much of that pollution around the community can stem from construction sites that aren’t properly managed, with the runoff from such sites making its way into local rivers and streams. That pollution manifests in what most people know as “muddy water.”

But at MTSU, campus construction projects are already extremely well managed, Knight and Allen said, so the emphasis on pollution education for the campus community revolves around the everyday activities of thousands of people and automobiles navigating the 500-acre university footprint.

“Our No. 1 issue is litter, and second to that is what we call hydrocarbons, which is the parking lot runoff that’s coming off of your vehicles,” Knight said.

And although MTSU is a tobacco-free campus, the presence of cigarette butts in parking lots indicates smokers are lighting up inside their cars as required, but unfortunately those butts being tossed in lots end up in local waterways as part of runoff when it rains.

“It’s really about personal responsibility,” Allen said. “Your trash belongs in your car.”

Hydrocarbons such as oils, antifreeze and break dust from cars end up on parking lots before making their way into local streams.

The online training modules offered to university employees are an important part of educating the campus about pollution and raising awareness about ways to address the problem collectively.

“Everybody’s part of the campus community,” Knight said. “You do make an impact.”

“You can’t make those changes collectively unless you educate that population and people start to see where they fit in,” Allen said.