MTSU women can apply for schol..

‘MTSU On the Record’ guest dis.. 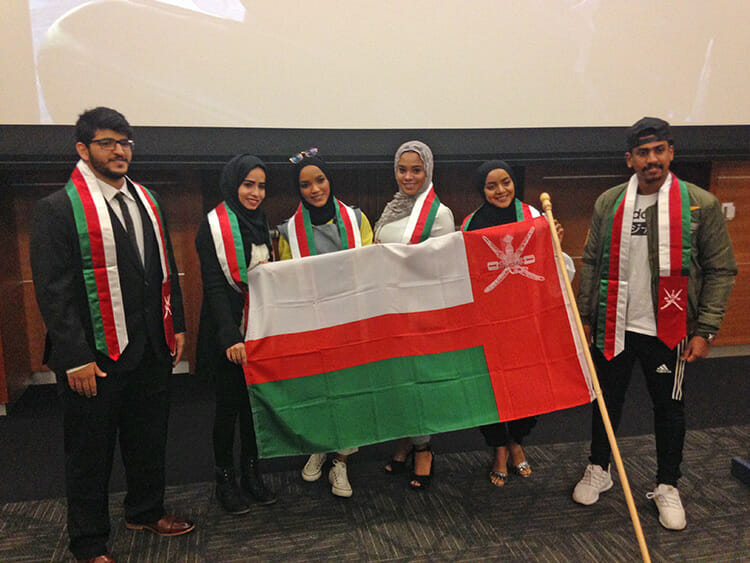 “At first, I got very nervous and usually I don’t get nervous speaking … but it felt good to be the one saying something,” said Wagner, an exchange student who spent her second sophomore semester at MTSU.

Wagner, along with other MTSU international students, gathered to celebrate future graduates Dec. 7 in the Student Union Ballroom in advance of the Saturday, Dec. 16, Fall Commencement ceremonies at Murphy Center where students from 12 countries will receive their undergraduate degrees.

From left, MTSU students Koichiro Kawaski, Yosuke Minami and Tzu Yang Chu come together to celebrate Minami’s completion of his exchange program at the Dec. 7 Fall International Undergraduate Graduation Reception in the Student Union Ballroom. The event was hosted by the Office of International Affairs. (MTSU photo by Jayla Jackson)

Wagner studied aerospace during her time here and wishes she didn’t have to say “auf Wiedersehen” (goodbye) to the Blue Raider community following her wonderful experience this semester. MTSU continues its push to attract international students, with more than 1,400 enrolled during the 2016-17 year.

“It’s nice people think of us and want to give us a farewell,” Wagner added. “I would have loved to stay longer because I’ve made so many friends and feel like I developed so much of my personality.”

David Schmidt, MTSU vice provost for International Affairs, opened the ceremony with well-wishes and words of wisdom and congratulations to all attendees.

“You all have managed to accomplish something not many people can do,” Schmidt said.

Filled with people from over 20 countries, the ballroom was also packed with grins, goodbyes and tasty refreshments.

Thirty-three graduates were honored, each receiving a customized stole representing their countries.

“This is really nice for them to do this for us; they did a great job, just really good,” said graduating senior Tarq Alanazi of Saudi Arabia.

Emily McAnally, international student and scholar services coordinator, played a major role in organizing the reception recognizing students who are graduating or finishing their exchange program this year.

“I think students being able to share with other friends and family back home about MTSU and other programs we offer could help the continuation of creating a better understanding between all the different countries and establish common ground,” she said.

The Office of International Affairs offers exchange programs and other unique services. Anyone interested in enrolling as an international student should visit http://www.mtsu.edu/international-admissions/index.php.

“My best work is done when I get to know these students and build a relationship with them which makes it easier to figure out what their needs are while at MTSU,” McAnally added.

For more information about the Office of International Affairs, visit http://www.mtsu.edu/intered/index.php or call 615-898-2116.

MTSU international student Lili Brewin, center, of the United Kingdom shows photos she shot during the Dec. 7 Fall International Undergraduate Graduation Reception in the Student Union Ballroom. The event was hosted by the Office of International Affairs. (MTSU photo by Jayla Jackson)

Shan Zheng, a graduate teaching assistant with the MTSU Center for Chinese Music and Culture, plays the guzheng during the Dec. 7 Fall International Undergraduate Graduation Reception in the Student Union Ballroom. (MTSU photo by Jayla Jackson)

A group of graduating MTSU international students from Oman post for a photo at the Dec. 7 Fall International Undergraduate Reception in the Student Union Ballroom. The event was hosted by the Office of International Affairs. (MTSU photo Jayla Jackson)