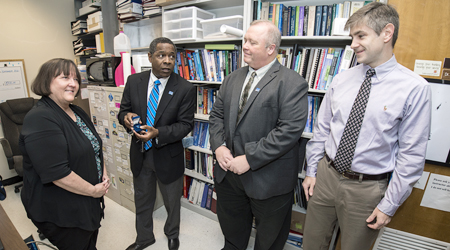 Dr. Judith Iriarte-Gross’ nearly 18 years as a passionate advocate for four areas of science as career possibilities for girls and young women has led to special recognition from MTSU President Sidney A. McPhee.

McPhee presented Iriarte-Gross with the President’s Silver Column Award Feb. 4 in a brief ceremony inside her office in Wiser-Patten Science Hall.

She is the fifth recipient of the honor since the president established the award in 2004.

“This validates the hard work all of us have been doing,” Iriarte-Gross said, noting the many volunteers who assist every year with events that girls can attend or workshops that adults participate in that can lead girls to choose a science, technology, engineering or mathematics — or STEM — career to pursue.

“We have to have girls in STEM education today for the STEM work force of tomorrow,” the chemistry professor added.

“Girls want to see role models who look like them, are from the same town and are in STEM. They see these role models being successful and happy in their STEM careers.”

McPhee praised Iriarte-Gross, who also leads the MTSU Women in STEM Center and is director of the annual Expanding Your Horizons conferences and Girls Raised in Tennessee Science, or GRITS, workshops that provide girls with more science, technology, engineering and mathematics education and career awareness.

“It is designed to recognize employees who go above and beyond the call of duty —extraordinary individuals who really show their commitment to the university,” McPhee said of the award, which is embodied by a silver pin with MTSU blue inlays representing the columns of Kirksey Old Main.

He said Iriarte-Gross makes a difference through her “caring for students and doing those things that really reach beyond what the expectations are. You certainly exhibit every characteristic associated with being an outstanding faculty member, an outstanding person.”

McPhee told Iriarte-Gross that he has watched her commitment through the years, “not only the GRITS program, but the attention you’ve paid to your students, the quality teaching … and you don’t expect anything in return for it. You don’t expect any kind of recognition.

“You’ve changed a lot of lives,” he continued, noting that the professor serves as a “role model for faculty when it comes to caring for, teaching, retention, graduation — you open up the dictionary, and your picture is there under those categories.”

“Judith has championed the cause of making science more interesting and vital to young girls and, in doing so, has changed lives for the better across the nation,” MTSU Provost Brad Bartel said. “She is an inspiration to her peers and students, and her scholarship and service has bolstered our university.”

College of Basic and Applied Sciences Dean Bud Fischer said Iriarte-Gross “is a tireless worker with a real passion for the cause of increasing women in the STEM disciplines.

“Through her numerous activities she leads or is involved with, she has been able to touch the lives of a large number of young girls and women and have fueled their love of science.”

“Wow, I’m honored to be in the company of such notable past recipients,” Iriarte-Gross said.