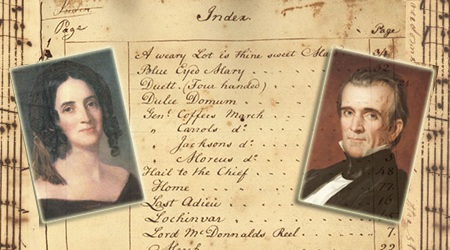 Thanks to MTSU’s Center for Popular Music and the James K. Polk Ancestral Home in Columbia, Tenn., the community can get a glimpse into the music of a former first lady — and a century — in two free public concerts.

At age 13, Murfreesboro native Sarah Childress Polk filled a notebook with her favorite popular songs and hymns, laboriously copying the lyrics and musical notations of “Blue Eyed Mary,” “Last Adieu,” “One Kind Kiss Before We Part,” “Sigh Not for Love,” “Tho’ You Think to Vex Me” and more.

You can learn more about the songbook in the video below.

“It’ll be sort of an insight into the iPod of 1818, Sarah’s iPod,” says Lucinda Cockrell, assistant director and archivist of the Center for Popular Music and a former director at the Polk Home. “It’s all her music that she liked as a young teenager, but back then, you had to hand-write the music out.

“It’s a lot of popular and sentimental songs that young ladies liked at the time. It’s really kind of fun to see what teenager Sarah was into.”

When she was almost 20, she wed James K. Polk, an attorney who would become the nation’s 11th president in 1845 while she became the Jackie Kennedy of her day — stylish, politically astute, devout and a social trendsetter.

But Sarah Childress had one unexpected favorite in her 1818 schoolgirl playlist, compiled while she was away at school in North Carolina.

“She’s the first lady who started having ‘Hail to the Chief’ played every time Polk walked into the room, because he was short, and she didn’t want people to miss him …. It wasn’t the first time it was played — that was George Washington’s memorial service — but Sarah really is given the credit with making it a practice of playing it every time the president enters. She was a very modern woman in that sense.”

You can see a gallery of photos of the songbook below; click on each thumbnail photo for a larger view.

Performing pieces from Sarah Polk’s songbook at each concert will be vocalist Amy Jarman and pianist Ben Harris, both from the Blair School of Music at Vanderbilt University.

The concerts also will include hymns favored by the former first lady and performed by members of the Harpeth Valley Sacred Harp Singers, a group that gathers to sing shape-note music throughout the Southeast. Tim Reynolds directs the ensemble.

The concerts are being presented in conjunction with the Polk Home’s current exhibit, “Sarah Polk, First Lady of Style,” which features more than 50 of the former first lady’s original belongings, including her songbook and fashion items from her White House years.