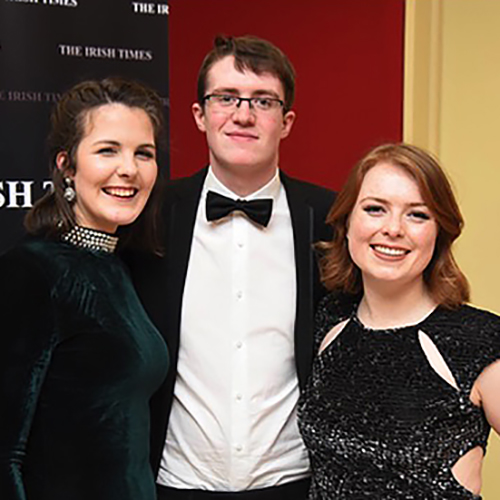 MTSU’s Blue Raider Debate team again hosted the Irish Times National Champions for a friendly rhetorical exhibition as the team continues an impressive season that has led to top finishes around the region.

Debating the topic of whether university education should be free, this year’s public exhibition with the three-member Irish team from University College Dublin’s Literary and Historical Society took place March 21 in the State Farm Lecture Hall of the Business and Aerospace Building.

The Irish team’s MTSU visit is part of its U.S. tour that includes stops at several other universities.

MTSU also hosted the Irish Times champions in 2015. This year’s visit comes after the Blue Raider debate team’s stretch of successes since November 2016. The MTSU team has competed in five tournaments, including a win in the Southeast Debate Tournament against the best team in the region.

“They have become the No. 1 debate team in Tennessee since the 1980s,” said debate team coach Patrick Richey, director of forensics at MTSU.

“Tennessee is the most competitive state in the nation,” Richey added. “They compete in individual as well as team events and also public speaking events. They’re even breaking into forensics and have done really, really well.”

MTSU debate team member Skye Irish said that being on the team will help her with her future endeavors, which include law school.

“It doesn’t matter what views you have,” she said. “Debate is unique and welcoming, and we do as much as we can to help anyone out.”

“Debate team has been the most stable part of my college career,” said MTSU senior Alex Lempin, who serves as the team’s captain of individual events. “I have become a better public speaker, and it has helped me with my interview skills and to really think critically.”

“We have done really well in our team events and our individual event,” Lempin added. “We made our presence known regionally and statewide and have placed at both levels.”

MTSU’s Blue Raider Debate team has about 15 to 20 active members who represent a variety of majors from political science to communications to religious studies. Team members say they hope to continue their success throughout the 2017 season.

For more information about the debate team, visit www.mtsu.edu/debate, or contact Richey at Patrick.Richey@mtsu.edu.

Dara Keenan, left, of the Irish Times National Debate Champions, asks a question during the first rebuttal speech as his teammates Aisling Tully, center, and Leah Morgan watch during an exhibition with members of the MTSU Debate Team.

Christopher Cowherd, a freshman member of the MTSU Debate Team, delivers his address as teammates Tristan Horn, center, and Skye Irish listen. Horn also is a freshman, and Irish is a junior at MTSU.

Leah Morgan of the Irish Times National Debate Champions speaks during the March 21 exhibition with MTSU Debate regarding the topic of whether university education should be free.