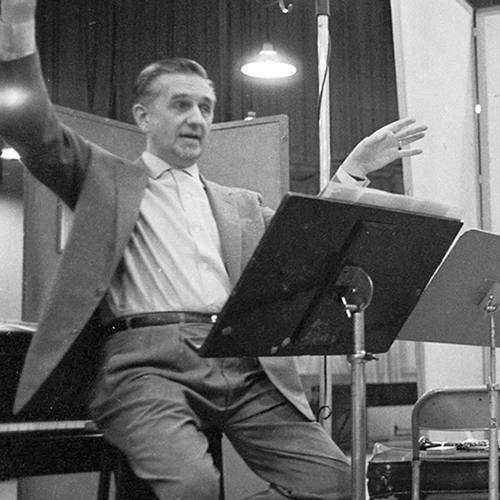 Jazz composer Gil Evans is shown at the piano in this Atlantic Records publicity photo, released around the time of his 1973 album for the label, “Svengali.” Evans’ work is the subject of MTSU’s Jazz Artist Series 2016-17 season launch Oct. 20 in the Wright Music Building.

“The Music of Gil Evans” will begin at 7:30 p.m. in Hinton Hall inside MTSU’s Wright Music Building. A searchable, printable campus parking map is available at http://tinyurl.com/MTSUParkingMap.

Tickets for the Oct. 20 concert, which is the first of three planned for the 2016-17 season, are $10 for the public. Admission is free for MTSU students, faculty and staff with a valid ID, and discounts for area music students and educators also are available.

“The concert will showcase historic arrangements and compositions alongside guest musicians as well as our student and faculty artists,” said Jamey Simmons, jazz trumpeter and coordinator of jazz studies in MTSU’s School of Music.

“Evans, known for his colorful scores for trumpeter Miles Davis, was one of the most influential jazz arrangers and composers of the 20th century. His legacy as a composer will be on display with the Tennessee Jazz Collective, a big band made up of students, faculty and guest performers.”

Conductor and composer Ryan Truesdell will lead the Oct. 20 program at MTSU with the Tennessee Jazz Collective. Truesdell is the producer and conductor of the Gil Evans Project, a group established to bring Evans’ music to the stage.

Tickets may be reserved in advance by calling 615-898-2724 or emailing Simmons at james.simmons@mtsu.edu. Tickets also can be purchased at the door.

Evans fell in love with music as a child and formed a dance band while he was still in high school. He toured with a nine-piece orchestra, eventually providing accompaniment for comedian Bob Hope’s nationally syndicated radio show, and after serving in the U.S. Navy during World War II, moved to New York City to work for his friend, composer and bandleader Claude Thornhill. His New York home soon became a haven for musicians interested in expanding their styles, including Davis, Charlie Parker, Dizzy Gillespie, Gerry Mulligan and John Carisi.

By 1948, these artists had begun popularizing nine-member ensembles to fill the gap between smaller three- to five-piece “combos” and fully orchestrated and more expensive “big bands.” One of their signatures was incorporating French horns and tubas into the nonets to expand their sound.

Evans quickly became one of Davis’ friends and favorite arrangers, setting the stage for the acclaimed albums “Miles Ahead” “Porgy and Bess,” “Sketches of Spain” and “Quiet Nights.” Beginning in 1957, Evans also recorded his own albums with soloists that included Lee Konitz, Jimmy Cleveland, Steve Lacy, Johnny Coles and Cannonball Adderley.

He received a Guggenheim Fellowship for composition in 1968, was a founding artist of the Kennedy Center in 1972, and continued performing, producing and arranging until his death in 1988 at age 75.

“The exciting thing for us as performers will be the amazing timbres used in this music; woodwinds, French horns, tuba — all sounds that are not as common in most big bands,” said Simmons. “In this music, the stage is set for improvising soloists in very special ways.”

Now in its 18th season, the MTSU Jazz Artist Series brings internationally renowned jazz artists to campus for performances and educational workshops. Past guest artists have included some of the most important musicians and educators in jazz history.

The 2016-17 Jazz Artist Series continues Thursday, Feb. 2, with a collaboration between the MTSU Jazz Studies Program and the MTSU Dance Theatre. The third concert in the series is set for Saturday, March 25, to celebrate the MTSU Illinois Jacquet Jazz Festival.

You can learn more about Evans at his website, www.gilevans.com, and watch his live 1983 performance with his orchestra in Lugano, Switzerland, of “Stone Free” and the 1959 CBS film featuring the Miles Davis Sextet performing a portion of “Miles Ahead,” with Evans conducting, in the videos below. Truesdell and the Gil Evans Project are featured in the third video.