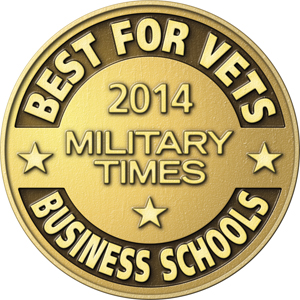 Military Times has named the MTSU Jones College of Business among its “Best for Vets: Business Schools 2014” rankings.

The Jones College is one of 64 schools in the country to have made this list.

“This latest distinction for the Jones College is yet another testament to our excellent faculty and staff,” said David Urban, dean of the college.

The Military Times is made up of the Army Times, Navy Times, Air Force Times and Marine Corps Times. The organization says it focuses on culture and curriculum that caters to military veterans when conducting and scoring the second annual Best for Vets: Business Schools survey, a nearly 80-question analysis of a school’s complete offerings for veterans.

“As with all of the Best for Vets rankings, Best for Vets: Business Schools is an editorially independent news project that evaluates the many factors that make an institution a good fit for military veterans,” said Amanda Miller, editor of Military Times EDGE magazine.

Best for Vets provides service men and women a gauge by which to judge whether a school or program will truly benefit them. According to the Military Times, the rankings factor in academic quality, outcomes and policies, school culture, student support and cost.

MTSU was previously recognized by the Military Times in its “Best for Vets: Colleges 2014” rankings. The university also made the 2014 Military Friendly Schools list by G.I. Jobs magazine, which recognizes the top 15 percent of colleges that delivers the best experience for military students.

MTSU was the first school in Tennessee with an on-campus representative for VetSuccess, a collaboration between the university and the U. S. Department of Veterans Affairs to provide a place where students with military service can gather to obtain assistance and peer support.

The university also has a standing Veterans and Military Affairs Committee, as well as the student-led veterans group, Blue Raider American Veteran Organization, or BRAVO, which was recently recognized by the Student Veterans of America national organization as Chapter of the Month for March 2014.