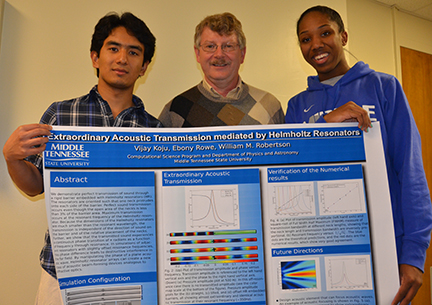 While MTSU student-athlete Ebony Rowe wanted to be on campus for Scholars Day Friday, March 21, a Lady Raiders team commitment meant she needed to be 2,420 miles away in Seattle, Wash.

MTSU women’s basketball star Ebony Rowe, right, is part of a physics research project with graduate assistant Vijay Koju, left, and professor Bill Robertson. Their research was selected to included in the 2014 Scholars Week at MTSU. Rowe and the Lady Raiders advanced to the NCAA tournament. They will play Oregon State Sunday night in Seattle, Wash. (MTSU photo by News and Media Relations)

The 29-4 and C-USA tournament and regular season champion Lady Raiders are preparing for a 7 p.m. CT Sunday meeting with Oregon State in the first round of the NCAA women’s basketball tournament.

The Conference USA women’s basketball player of the year’s mind and focus are in Seattle, but her research and poster collaboration with graduate student Vijay Koju and physics professor Bill Robertson were among 180 posters in the Student Union Ballroom, where the Universitywide Scholars Day was the grand finale to eighth annual Scholars Week activities.

While Rowe has an opportunity to play pro basketball during the summer in the WNBA, she said she has accepted an offer to attend graduate school at Georgia Tech and study mechanical engineering.

“I got accepted into Illinois first,” said Rowe, who has a 3.6 to 3.7 GPA and will graduate in May. “They’re both top five schools, but Georgia Tech was my first choice. I accepted their offer. … My No. 1 option is still school right now, but if I get a chance to play, I probably will explore that and try and go to school if not this (fall) semester then delay it until the spring (2015) semester.”

MTSU Lady Raiders academic All-American Ebony Rowe, center, of Lexington, Ky., is shown in the electricity and magnetism classroom with associate professor Daniel Erenso, back, and senior physics major Price Stallard of Franklin, Tenn. Rowe, the women’s all-time leading scorer and rebounder, carries a 3.6 to 3.7 GPA in the classroom. She has chosen to attend graduate school at Georgia Tech, where she plans to major in mechanical engineering, but also may try her hand at pro basketball.

Rowe, a native of Lexington, Ky., who comes from a family of engineers who value education, said the academic effort is very important.

“You learn all these things in the classroom,” she said of her education. “They give you all the tools, but it’s kind of useless if you can’t apply it to things that are really going to change our world, real-world application. It’s a chance to get your hands dirty, get out of the classroom and really showcase all this university has to offer and all the great research that’s being done here by students.”

Robertson, a 19-year faculty member, suggested the idea. Koju and Rowe picked it up and ran with it.

Rowe, the daughter of Nick and Tyra Rowe of Lexington, Ky., added that it is a computational project strictly confined to a computer using specialized software.

“We conducted a lot of simulation in order to get some really interesting results,” Rowe said.

Coach Rick Insell said the 6-foot-1 Rowe, who is MTSU’s all-time leading scorer with 2,233 points and rebounder with 1,297) was here for the education.

“Academics were first. Basketball came after that,” Insell said.

Rowe was featured in an MTSU Magazine article titled “The Science of Sport.” For more, visit http://mtpress.mtsu.edu/magazine/index.php/the-science-of-sport/.

Logan Smith, center, talks with a group about his findings detailed on his poster during the 2014 Scholars Week Poster Exposition.