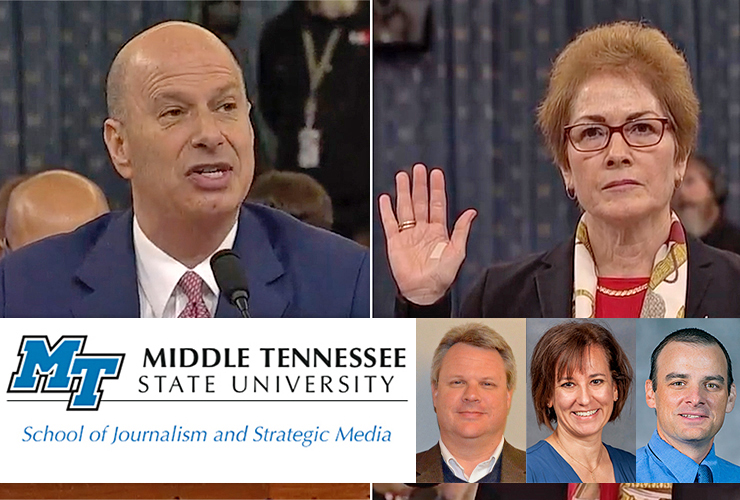 U.S. ambassador to the European Union Gordon Sondland received more media coverage than any of the other 11 witnesses who testified during the public impeachment hearings in Washington during the past two weeks, an analysis by researchers at MTSU’s School of Journalism and Strategic Media shows.

“Media scholars have been studying these dynamics since at least the 1970s, but we still have a lot to learn,” said Ken Blake, associate professor of journalism and a member of the research team. “The hearings provide a rare opportunity to study what happens when a lot of different people are watching a lot of different news outlets report in a lot of different ways about the same set of events – and all in a fairly short stretch of time.”

Matt Taylor, assistant professor of public relations at MTSU, said the team is using a relatively new tool, the GDELT 2.0 API, that captures worldwide news content in real time and makes it searchable.

“We can search news published online by outlets around the world to learn how many individual stories mention particular words or phrases on each day of a three-month rolling window,” Taylor said.

“By doing so, we can spot patterns in coverage, like which impeachment hearing witnesses get covered the most. Media decisions about which witnesses get the most and least coverage likely affect how media audiences think about and understand the hearings.”

Taylor said Sondlan topped the coverage chart probably because Sondland asserted not only that there was a “quid pro quo” but that the president directed it and that top administration officials, including Vice President Mike Pence and Secretary of State Mike Pompeo, knew about it. The claims themselves generated considerable news volume, and efforts by the president’s defenders to cast doubt on the claims produced even more.

Tricia Farwell, associate professor of advertising, said the team is also looking at how the transition from closed-door depositions to public, televised hearings appears to have affected coverage volume.

“All three of the hearings’ most-covered witnesses – Sondland, Yovanovitch and Ukraine expert Lt. Col. Alexander Vindman – had received substantial coverage during preceding weeks, as news media reported on and reacted to leaked information about their closed-door depositions on Capitol Hill,” Farwell said.

In coming months, the team plans to examine differences across news outlets, such as MSNBC, CNN, and Fox News, and explore the degree to which coverage of the hearings correlated with public opinion trends and perhaps displaced coverage of other news topics, Farwell said.

The team downloaded the data using the GDELT 2.0 API, offered by the Global Database of Events, Language and Tone. See https://blog.gdeltproject.org/gdelt-doc-2-0-api-debuts/. All searches were limited to online news articles originating in the U.S. and published in English.