Student veteran Martinna Young candidly admits “school can be challenging.” That’s school as in Middle Tennessee State University, where she’s taking nursing classes and clinicals this semester. But for this wife, mother of three children age 9 and younger, life itself can be a challenge.

The 31-year-old Murfreesboro resident, who served eight years in the U.S. Air Force, juggles all the above along with being a patient care tech nursing intern with Saint Thomas West in Nashville, Tennessee. 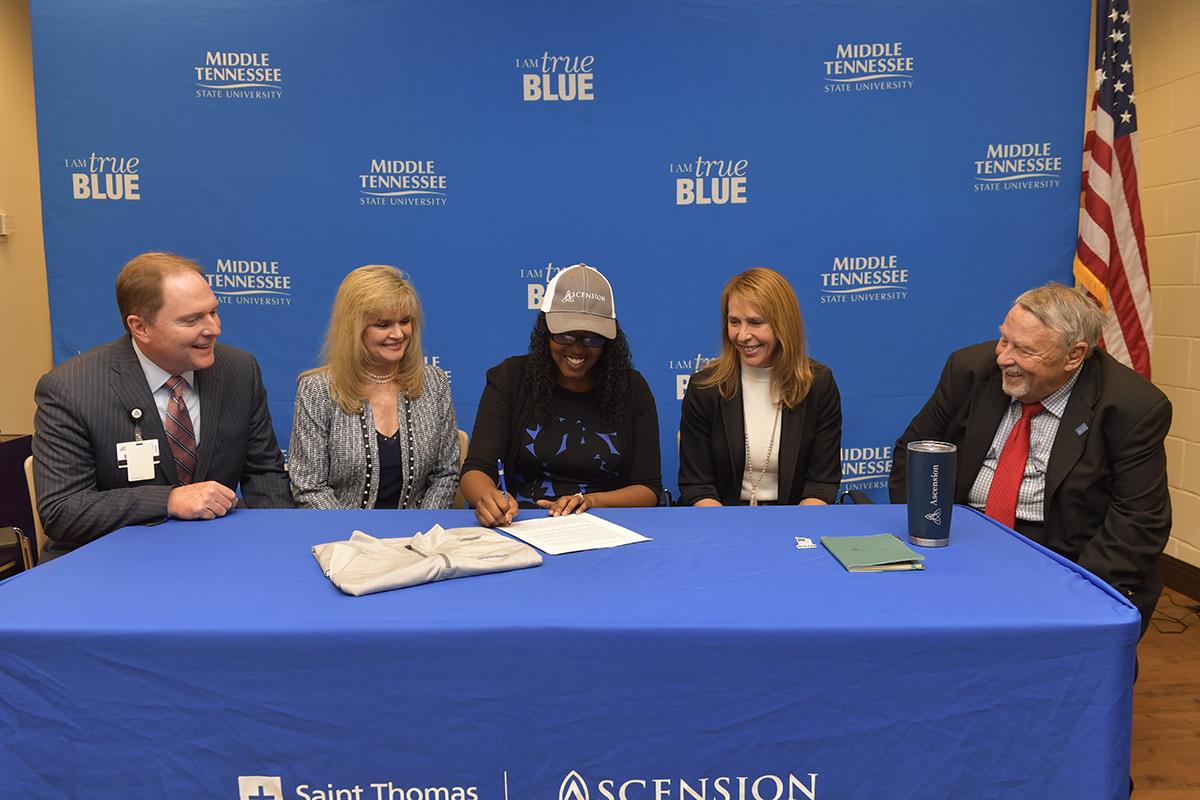 Young, a senior nursing major, is the inaugural member of the Ascension Saint Thomas Nursing Corps, a partnership with MTSU that seeks to create a robust pipeline of strong registered nurse candidates who are also military veterans.

With hospital and university officials looking on, Young signed with Ascension/Saint Thomas Health Tuesday (Nov. 26) at the Charlie and Hazel Daniels Veterans and Military Family Center in a special ceremony in the Keathley University Center.

The Nursing Corps is a collaboration between Ascension Saint Thomas, MTSU’s Daniels Center, and MTSU’s School of Nursing. The Daniels Center will direct student-veterans early in their academic career to the nursing corps for work opportunities and paid internships with the eventual goal of being hired upon graduation and successful completion of the National Council Licensure Examination.

“It’s pretty exciting,” Young said of both the opportunity and being the first Saint Thomas Nursing Corps member. “When we began talking about it, I didn’t think of the magnitude. Many people still don’t think about women being in the military and to be a female veteran doing this, it’s quite exciting.”

MTSU College of Behavioral and Health Sciences Dean Terry Whiteside said “the future is bright” for Young and called it a “win-win-win-win for the Daniels Center, School of Nursing, Saint Thomas and the student.”

School of Nursing Director Jenny Sauls said Young “is the perfect person chosen” to be the first nursing corps member. 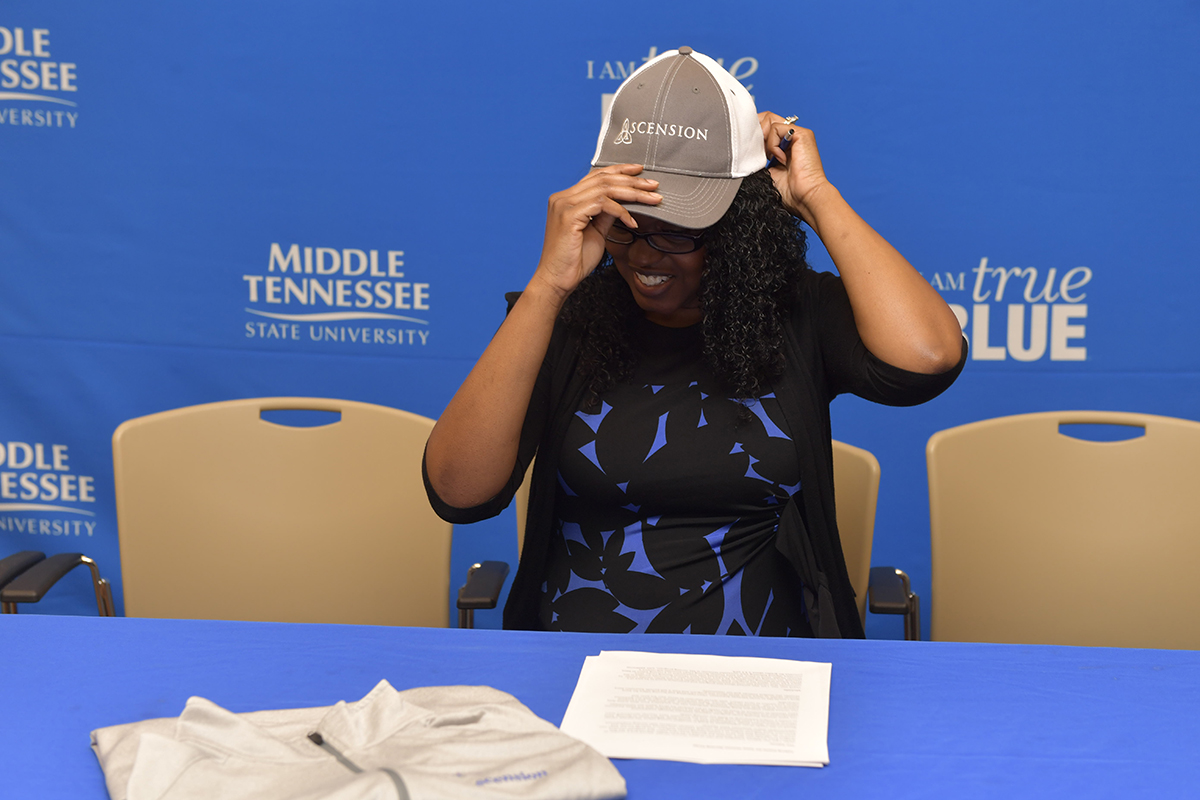 MTSU student veteran Martinna Young of Murfreesboro tried on an Ascension baseball cap during the inaugural signing for her to be the first member of the Saint Thomas Nursing Corps Tuesday, Nov. 26, at the Charlie and Hazel Daniels Veterans and Military Family Center inside the Keathley University Center. (MTSU photo by James Cessna)

Tim Adams, Ascension Saint Thomas president and CEO, said U.S. veterans “bring distinctive attributes into the workplace from their active-duty experience that includes teamwork, leadership, perseverance, self-discipline, integrity and a purpose beyond one’s self — learned through service. These attributes closely align with Ascension values and mission to serve others, with special attention to those who are poor and vulnerable.”

Participation in the Nursing Corps will provide the student veteran the following benefits:

• Stipend of up to $750 per successfully completed nursing school semester (added to the student’s paycheck, and this is not financial aid). 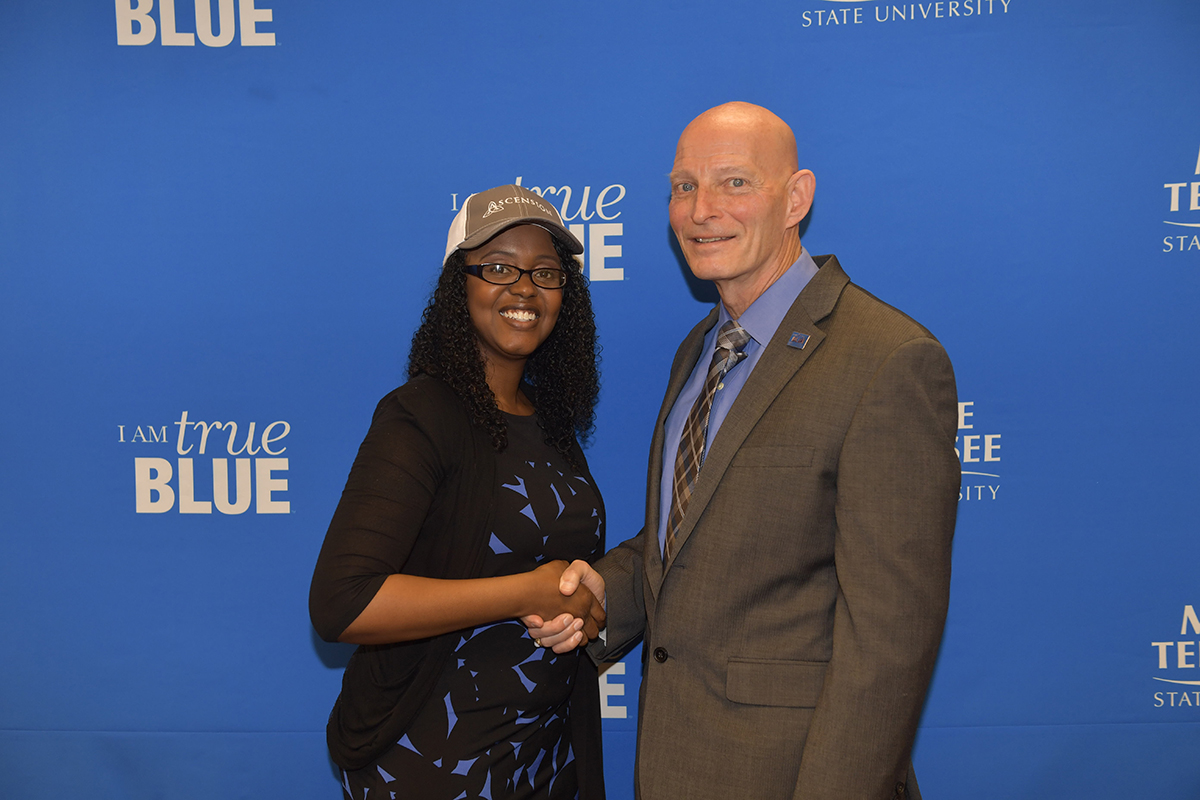 Young’s husband, Deandrae Young, also is an Air Force veteran. They have three daughters — Trinnity, 9, Aubri, 5, and Draya, 4. She has one more semester of classes, clinicals and internship, and plans to graduate with her bachelor’s degree in May 2020. She could eventually pursue any Ascension opportunities, but “will probably stay in the Nashville-Murfreesboro area.”

A Huntsville, Alabama, native with military family ties (her stepfather and a sister served in the U.S. Army), Young left school and joined the Air Force. She would become an operations manager for the civil engineering squadron at Shaw Air Force Base in Sumter, South Carolina. When Trinnity was born prematurely and diagnosed with gastroschisis, the amazing care from NICU nurses left Young determined to become a nurse.

As she presses her way through her courses, her children now tell her “we are going to be good today so you can get a lot of homework done.” 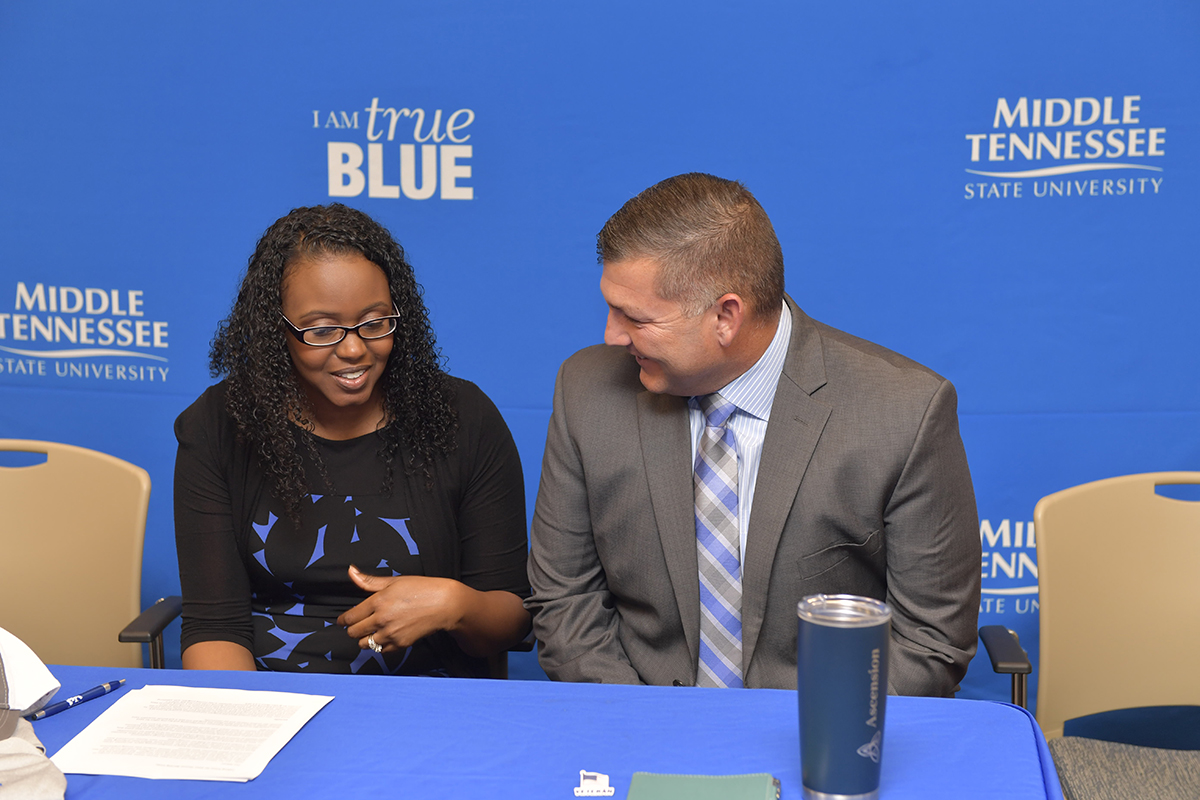