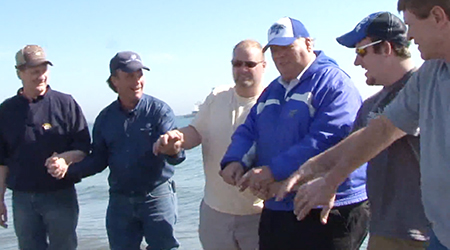 The June edition of MTSU’s monthly television program, “Out of the Blue,” offers a passenger-seat view of this spring’s historic coast-to-coast trip conducted by Dr. Cliff Ricketts, MTSU’s “Davy Crockett of science.”

“Sun and Water: Driving Coast-to-Coast on Nature’s Energy” will air for the first time on broadcast TV at 1:30 p.m. Sunday, June 9, on NewsChannel5+ and other Midstate cable outlets that carry “Out of the Blue.”

You can watch the program here, too.

In the 30-minute mini-documentary, video journalist Mike Browning of MTSU’s Office of Marketing and Communications chronicled Ricketts’ five-day, 2,600-mile odyssey of driving across the United States without gasoline in March.

“This is awesome. Mike did a tremendous job,” Ricketts said. “Mike totally captured it all, from the sunrise at Tybee Island (Ga.) to the sunsets at the Pacific, and I like how it showed scenes of Americana along the way.

“This fully explained the scientific, environmental, political and economic implications why the research is important.”

In a modified Toyota Prius and 1994 Toyota Tercel powered exclusively by hydrogen gleaned from sun and water on the MTSU campus, Ricketts made headlines nationwide when he and his team successfully drove from the Atlantic Ocean to the Pacific Ocean. University cameras documented every step of the way.

Ricketts, a veteran School of Agribusiness and Agriscience faculty member and an alternative fuels researcher, has long dreamed that people will drive their vehicles using only the natural energies of sun and water. He and his students have performed 25 years of research to determine how to make that dream a reality.

Time and again along the cross-country journey, Ricketts stopped for media interviews about his expedition and about the technology.

Writer-producer Browning created a 60-minute documentary, which has been trimmed to meet the 30-minute requirement for the television program. Jon Jackson with MTSU Audio-Visual Services served as chief editor.

“So much detail goes in behind it,” said Browning, who spent 25 years as a TV journalist before working for the state of Tennessee, first in media relations with the Tennessee Department of Safety and Homeland Security and now as a video producer and editor at MTSU.

Browning also covered Ricketts while working for WKRN-TV in Nashville.

“I found him (Ricketts) to be innovative,” Browning said. “I had the privilege of seeing it come to fruition. I was fortunate to be a part of a historic trip.”

You can watch the new “Out of the Blue” above anytime, or watch it on Murfreesboro cable Channel 9 Monday through Sunday at 7 a.m. and 7:30 p.m. and on NewsChannel5+ Sundays at 1:30 p.m. It’s also available on other cable outlets in middle Tennessee, so check local listings. Check the “Out of the Blue” archives, too, at www.youtube.com/user/MTSUOutOfTheBlue/videos.