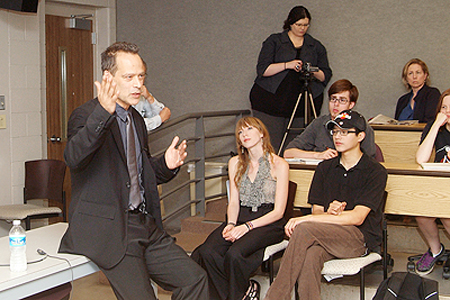 Combat journalist and best-selling author Sebastian Junger speaks to a group of MTSU students in the Bragg Mass Communication Building March 20. Junger also offered a lecture, “Dispatches from War: Stories from the Front Lines of History,” to an appreciative Tucker Theatre audience during his daylong visit to campus. (MTSU photo by Lynn Adams)

Most people who have career epiphanies go back to school or start their own businesses.

After a workplace accident as a “climber” for a tree-services company, the man who would become a best-selling author, journalist and documentary filmmaker said he had a revelation.

“I got a backpack and a sleeping bag, some notebooks and a box of pens. I saved up about five grand and I bought a ticket. … I was in Sarajevo in 1993, and I gradually figured it out. I was at the very bottom of the media food chain, but I was technically a working journalist. And it gave me a sense of doing something important … outside my own small life.”

His decision led to almost 20 years as a combat journalist, earning him awards, acclaim, book and movie deals—and post-traumatic stress disorder, like some of the soldiers he covered.

“I would definitely do it again,” he said of his war-correspondent experience. “It’s one of the most meaningful experiences of my life. I’m equally glad that I’m not doing it anymore.”

He left the front lines for good in 2011 after the death of his longtime friend and colleague, photojournalist Tim Hetherington, with whom Junger was embedded for more than a year in eastern Afghanistan with a platoon from the 173rd Airborne Brigade Combat Team.

“Tim bled out in the bed of a pickup truck,” Junger said, explaining that his friend died from a shrapnel wound while covering the Libyan conflict because no one nearby had emergency medical training.

“Right then and there, I said, ‘I’m out. No more. No more pickup trucks filled with rebels on the front lines.’”

Junger’s lecture, “Dispatches from War: Stories from the Front Lines of History,” touched on the nobility and courage of those who fight, and are caught up in the fighting, as well as the horror. His listeners included several student members of MTSU’s Army ROTC cadre as well as active-duty and retired military faculty and community members. (You can watch his lecture below.)

“I wanted to write a book and make a movie about what it feels like to be a soldier,” he said, referring to his second book, War, and the documentary “Restrepo,” which won the 2010 Grand Jury Prize at the Sundance Film Festival and was nominated for a 2011 Academy Award for Best Documentary. Junger also wrote The Perfect Storm, a New York Times best-seller that became an Oscar-nominated box-office success.

“War is incredibly sad. People forget that. … When Tim died, I got a lot of emails and messages, and one was from a Vietnam vet whom we’d both met. He said that we’d come very close to telling the truth of war, but we hadn’t come all the way.

“He wrote, ‘The core truth of war is that you’re guaranteed to lose your brothers. And now you understand everything there is about war.’”

Junger’s daylong MTSU visit also included speaking with classes in the College of Mass Communication and a series of interviews with campus media.

He helped kick off a yearlong project for students to interview and document, via print and multimedia, the experiences of MTSU’s many veterans of Afghanistan and Iraq.

“Now that the wars are almost over, this is the time to record their stories,” said Leon Alligood, a professor in the School of Journalism who was himself embedded with the 101st Airborne Division in Afghanistan and Iraq when he was a reporter at The Tennessean.

“I’m hoping this time next year we’ll have a multimedia exhibition, and maybe a print product, to catalog these stories,” added Alligood, who teaches “Immersion Journalism” classes in addition to reporting, feature-writing and interactive-media courses at MTSU.