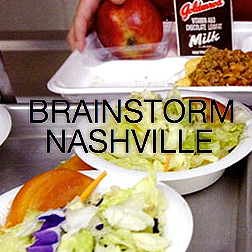 MTSU and The Tennessean tag-teamed Twitter March 20 to help alert and inform middle Tennessee about the dangers of childhood obesity in an inaugural on-campus “Tweetup.”

About 100 people attended both afternoon sessions in person, and dozens more followed a live stream at www.BrainstormNashville.com and on Twitter and Facebook that featured presentations by MTSU’s Dr. Don Morgan, an expert on physical fitness and childhood obesity, and Tennessean Education Editor Heidi Hall.

Morgan praised the effort and said he looks forward to continued partnerships with Brainstorm Nashville.

“This is one of the most challenging things we’ve ever faced,” Morgan said.

MTSU and The Tennessean teamed up March 1 to launch “Brainstorm Nashville,” a digital hub for civic engagement designed to foster community problem-solving. The Tweetup was part of a new strategic partnership supporting the new website and welcomed MTSU students and faculty, Nashville business community partners and others.

Suenalie Sythat, a sophomore public-relations major at MTSU, said she found the event “really interesting. I’ve never seen an organization like this where you can get feedback from live streaming. I think it will be really productive.”

Heidi Hall, education editor for The Tennessean, talks about her writing on the national obesiity epidemic during the MTSU/Tennessean “Tweetup” on child obesity March 20 on campus. (MTSU photo by Andy Heidt)

“Children are the future. We have to do something to get things done,” added Paris McCullough, one of Sythat’s PR classmates and a junior electronic media communications major.  “This can be something small or it can be something big. I wanted to do my part and participate as much as possible.”

Representing Nashville Public Television, Jo Ann Scalf provided a clip about obesity from one of the station’s seven documentaries on children’s health issues. It can be found at www.wnpt.org/childrenshealth.

Heather Cass of The Tennessean’s marketing department was one of five newspaper employees involved in the event. At one point, Cass tweeted about 15 times during the initial two-hour event.

“We all know obesity is a problem,” Cass said. “How do we solve it and be a part of the conversation? There have been a lot of hashtags, all from the community who are following this today. The whole community is watching this live. They want to come together and help solve the problem and create action and solve this problem.”

Hall has taken a personal interest in the venture. She moved to Tennessee from Tampa, Fla., in 2007 and gained 80 pounds after the move. Since then, she has lost 96 pounds and talked her editors into initiating a campaign to fight childhood obesity.

“We want to make sure everything is being done to address childhood obesity,” she said. “It does take a Herculean effort (to lose weight). I still have more to go. I’m proof that it can be done.”

Gil Sanchez, CEO of the Ventura, Calif.-based organic foods company VendNatural, said he sees the most important aspect as “getting the schools to open up and getting kids motivated. Moderation is the best method: some sports, lower-calorie foods and low-sodium products.”