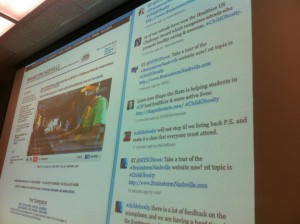 At first glance, the March 20 gathering in a classroom of MTSU’s Cason-Kennedy Nursing Building didn’t seem much different than any other lecture on campus.

But a closer look revealed some differences: Behind the speaker, a screen displayed a rolling feed of “tweets,” 140-character messages delivered via Twitter. Next to the tweets, a Livestream video window showed how the lecture was being delivered on the Internet.

As panelists, including MTSU Professor Don Morgan, discussed the topic of childhood obesity, comments and questions streamed via Twitter from people in the classroom as well as interested onlookers and supporters throughout middle Tennessee and the nation.

Tuesday’s event, billed as a “tweetup,” came about through the partnership MTSU has forged with The Tennessean to promote Brainstorm Nashville (www.BrainstormNashville.com), a digital hub for civic engagement designed by the Nashville newspaper to foster community problem solving. It was the first tweetup organized by MTSU.

Attended by about 100 people in person and followed by video on the Brainstorm Nashville website and on Twitter and Facebook by dozens more, the event featured presentations by Morgan, an expert on physical fitness and childhood obesity, and Heidi Hall, education team leader and an editor of The Tennessean.

“We all know obesity is a problem,” said Heather Cass, a marketing manager for The Tennessean and part of the Brainstorm Nashville launch team. “How do we solve it and be a part of the conversation?

“There have been a lot of hashtags (during the tweetup), all from the community who are following this today. The whole community is watching this live. They want to come together and help solve the problem and create action and solve this problem.”

Morgan, a professor in the Department of Health and Human Performance and director of the Center for Physical Activity and Health in Youth at MTSU, shared information and resources via Brainstorm Nashville on the benefits of physical activity for kids and families.

Hall has taken a personal interest in the venture. She moved to Tennessee from Tampa, Fla., in 2007 and gained 80 pounds after the move. Since then, she has lost 96 pounds and talked her editors into initiating a campaign to fight childhood obesity.

“We want to make sure everything is being done to address childhood obesity,” she said. “It does take a Herculean effort (to lose weight). I still have more to go. I’m proof that it can be done.” 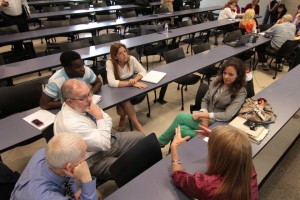 Community members and interest groups across the region, including Gov. Bill Haslam and MTSU President Sidney A. McPhee, chimed in during and after the tweetup – adding ideas, showing support and sharing observations. Among them:

• @commlong: #brainstormnash #Mtsu Tweetup to learn and talk and brainstorm about #childobesity is SO informative and engaging. Well done!

• @ruthnashville: Can’t be at the #brainstormnashville #childobesity meet up, but hope someone is talking about #breastfeeding as essential to the solution.

• McPhee tweeted (@PresidentMcPhee): Sending my support for #BrainstormNashville and today’s tweetup on the important topic of #ChildObesity. My thanks to @MTSU and @Tennessean 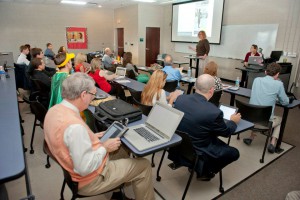 Representing Nashville Public Television, Jo Ann Scalf provided a clip during the tweetup about obesity from one of the station’s seven documentaries on children’s health issues. It can be found at www.wnpt.org/childrenshealth.

Several students, many of whom attended the tweetup in person and participated in the breakout sessions, said they were impressed by the multimedia engagement.

Suenalie Sythat, a sophomore public relations major at MTSU, said she found the event “really interesting. I’ve never seen an organization like this where you can get feedback from live streaming. I think it will be really productive.”

“Children are the future. We have to do something to get things done,” added Paris McCullough, one of Sythat’s classmates and a junior in electronic media communication.

For more information about Brainstorm Nashville, including ideas from the tweetup; video and other materials from the Tweetup; and other suggestions and comments, visit www.BrainstormNashville.com.