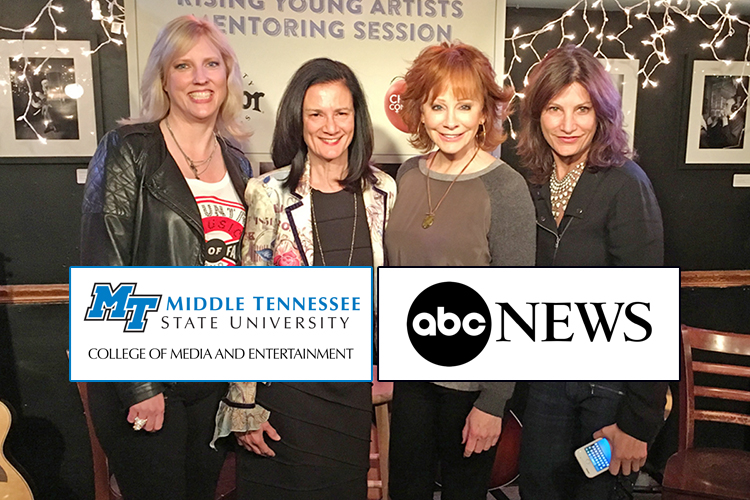 A Middle Tennessee State University music industry expert is a part of an ABC News special on the life and career of country megastar Reba McEntire that first aired Dec. 8.

Beverly Keel, dean of the university’s College of Media and Entertainment and a veteran music journalist and record company executive, contributed her expertise gleaned from a long-standing reporting relationship with the Oklahoma native.

The pair also have bonded over Keel’s activism for gender and racial equity in the music industry, which led Keel to co-found Change the Conversation and Nashville Music Equality to boost women’s and Black artists’ presence, respectively, on both sides of the microphone.

“I was interviewed about all aspects of her life, from her family and rodeo life growing up in Oklahoma to her path to superstardom,” Keel said of her contributions to the hourlong program, “Superstar: Reba McEntire.”

“I have interviewed Reba numerous times over the years, so I was able to draw from those conversations and my own research.”

McEntire, who launched her public career with a first-grade Christmas pageant rendition of “Away in a Manger,” sang with her siblings before coming to Nashville in 1975 to break into the music industry. After a few fits and starts, she found her footing in 1983 with a pair of No. 1 singles, “Can’t Even Get the Blues” and “You’re the First Time I’ve Thought About Leaving.”

She gradually took more control over her career, signing with MCA Records and rejecting the country-pop that executives pushed her toward in favor of more traditional country songs and arrangements.

Her determination has led to more than 100 singles on the Billboard Hot Country Songs chart, including 33 No. 1s; forming her own entertainment company that’s grown to include Reba-branded clothing, a restaurant and live music venue; stints in film and TV and on Broadway, including a current co-starring role in ABC’s “Big Sky”; and awards ranging from four consecutive CMA female vocalist wins to three Grammy Awards, capped by a 2018 Kennedy Center Honor.

Her life has also been marked by loss, however, including the 1991 California plane crash that killed her tour manager, seven band members and the aircraft’s pilot and co-pilot.

The ABC special, which discusses that loss, features rare childhood photos and behind-the-scenes videos to elaborate on McEntire’s grit and resolve in a male-dominated industry. Previous editions of the show, which ABC officials say features “mavericks who shaped American culture,” have focused on celebrities Whitney Houston, Kobe Bryant, Robin Williams and more.

McEntire, a competitive barrel racer in her youth, spent a day at MTSU’s Tennessee Miller Coliseum in October 2020 shooting the video for “Dear Rodeo,” a duet with singer and former bull rider Cody Johnson that made use of the skills of both MTSU alumni and current students.

The video is available below.

McEntire also served as a guest speaker during a daylong Leadership Music retreat at MTSU in 2017.

Keel, a 1988 MTSU journalism alumna, took the reins of her former college in January 2020 after teaching since 1995 in the internationally recognized Department of Recording Industry, including a seven-year stint as chair.

An award-winning music journalist whose work has appeared in People, Parade, InStyle, New York, Rolling Stone and many other publications, she took a leave of absence from the university to serve as senior vice president of artist and media relations for Universal Music Group Nashville, where she handled media campaigns for artists including Lionel Richie, Vince Gill, Sugarland, Shania Twain and George Strait.

Billboard put MTSU on its annual list of America’s top music business schools for the eighth time in October, saluting the Department of Recording Industry as “one of the nation’s oldest and most highly regarded music business programs.”

NBC News began calling MTSU a “Grammy-winner factory” in 2019 in the wake of alumni, students’ and staffers’ multiple nominations and wins from the industry’s top honors.

To learn more about MTSU’s College of Media and Entertainment and its programs, visit www.mtsu.edu/media.